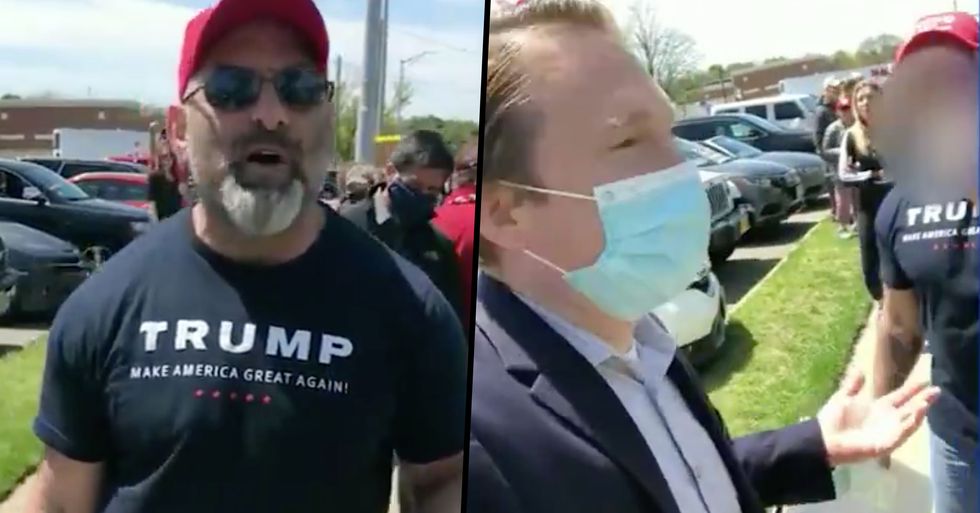 An anti-lockdown protester decided the best way to fight for the senseless cause was to invade a TV reporter's personal space.

Keep scrolling to witness the disturbing footage and to see why people have been left furious over these reckless acts...

I cannot believe he did this.

President Trump declared a national emergency to combat the coronavirus pandemic, freeing up $50 billion in federal funding and promising a screening website and drive-by tests.

The majority of usare now living in lockdown...

Things are simply getting worse and worse day by day...

Which has obviously resulted in mass panic and hysteria.

It all started in Florida. Scenes at the Clearwater Beach in Florida in March showed a lot of people completely disregarding these global warnings.

1,735 people in the state have now died, showing exactly what happens when people congregate in mass gatherings.

But now the protests have been spreading all across the country...

And the most recent one that took place in Long Island is certainly an unusual - and very stupid - one! Keep scrolling for the disturbing video.

A maskless, anti-lockdown protester decided he would fight the cause in a different way...

Instead of just walking through the streets with the rest of his brainless followers, he decided to invade a TV reporter's personal space and chase him away while he was trying to deliver a report.

The altercation was disgusting to watch.

Kevin Vesey was just trying to do his job but was interrupted by a very crude member of the protest, wearing a MAGA hat and a Trump shirt, that exclaimed he was "fine" to do so because he's "got hydroxychloroquine."

Vasey repeatedly told him to move away, but it was no use.

The man started to get more and more agitated, even using rude hand gestures while Vasey continued his Facebook Live report.

And of course, social media users were shocked.

@KevinVesey It's scary from outside US looking in. No surprise after 4 years of Trump attacking media but still no… https://t.co/s4yeaUQqU3
— Eoin Dineen (@Eoin Dineen)1589494844.0

This user couldn't believe what they were seeing and stated that the US is on a "dark path."

Others got really emotional about the issue...

And for good reason.

I'll probably never forget what happened today. I was insulted. I was berated. I was practically chased by people w… https://t.co/P5KMRKGisx
— Kevin Vesey (@Kevin Vesey)1589493881.0

When will this madness end? Keep scrolling to read about how Trump's valet got infected with the disease.