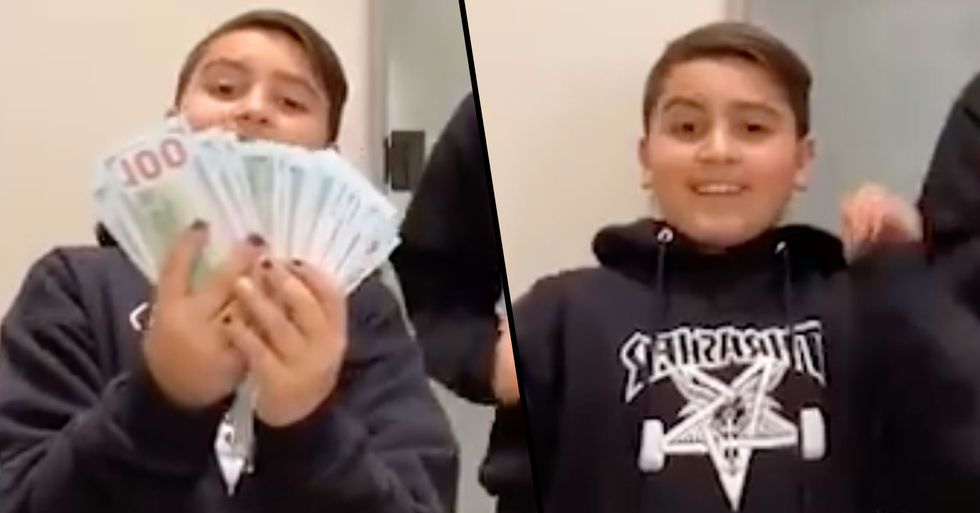 Kourtney Kardashian's mothering techniques have never been far from comment online. After her 10-year-old son, Mason Disick, ran an Instagram live Q&A without her permission, she well and truly put her foot down.

However, it seems he is refusing to be silenced as he made a return to a different social media platform in an attempt to "go viral."

Keep scrolling for the video...

Kourtney is a forty-one-year-old mother and American TV personality and weirdly, she is the lesser-known member of her family.

As one of the most famous families of our generation, all the Kardashians are constantly scrutinized.

The forty-year-old has remained as the least problematic, usually steering clear of the drama and wanting to live a peaceful life.

A few weeks ago, 10-year-old Mason joined Instagram without his parent's permission...

And he did perhaps the worst thing imaginable for the family by starting an Instagram Live Q&A. Big yikes.

But it seems Mason can't be silenced...

Why? Because he's now taken to TikTok to show everyone that he does what he wants when he wants. Keep scrolling for the clip.

His first TikTok page got removed, but he made a new account and told his followers why he keeps getting deleted...

According to Mason, his first TikTok page was deleted because he was "too young."

And he's not happy with the fact that his mom deleted his Instagram either...

He believes if it wasn't for his mom, he would have been an influencer by now. “I went viral. I would’ve had 2.7 mil by now if I kept it up," he said.

He also gave an update on his family in light of the s pandemic.

Has he seen Stormi? "No,'cause corona." Coachella plans? He "can't even go 'cause corona!" But that account was soon closed down too.

However, Mason's switched up his tactics now...

The crafty child decided that instead of making his own Tik Tok account yet again, he would use his friend's account to communicate with his so-called "fans."

Landon Travis is fourteen and helped Mason make his return.

They both got in front of the camera and danced around with a wad of cash in their hands.

And he didn't just stop there...

He continued to spill more family secrets, talking about his auntie Khloe, saying she was "doing well" and so was his mother Kourtney, despite the pandemic.

But apparently, Landon's account is the next to be taken down...

Mason just seems to be bad luck for everyone right now. I think it's time to give up the act and just wait until you're thirteen before joining the whirlwind of social media.

Keep scrolling if you want to read more on the Kardashian/Jenner clan because, apparently Kylie Jenner is back together with her ex, Travis Scott...