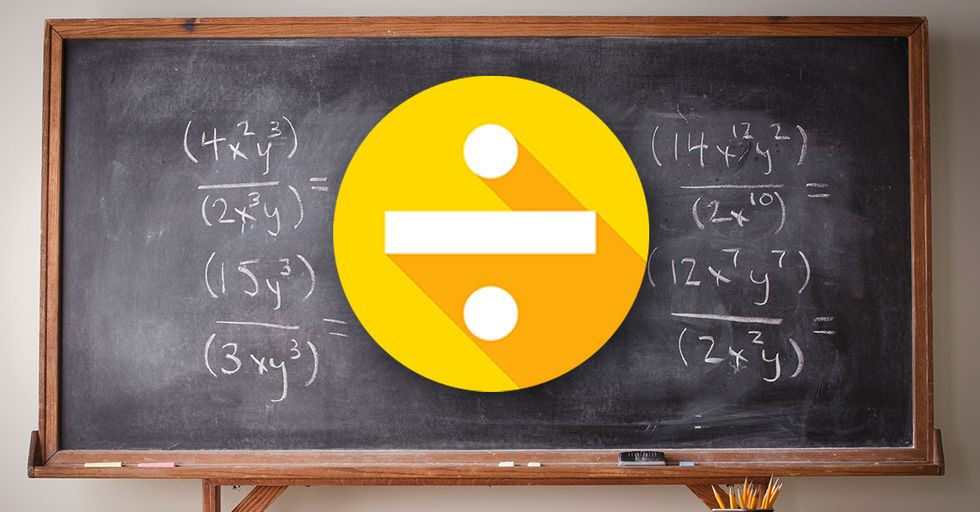 When you scroll through your Twitter feed, you probably expect the same sort of thing every day. Celebrity news, trending hashtags, and the latest ridiculous thing Donald Trump said. What you may not expect to see is a bunch of math nerds geeking out about symbols.

It isn't every day that a mathematical doodle blows up on Twitter, but somehow, that's exactly what happened for the division symbol — or obelus — this week.

As you grow up, you learn a lot of things that blow your mind. Like the fact that there's an arrow hiding in the FedEx logo.

It's always been there! How could you have missed it? Now, you'll never be able to unsee it.

There's also the fact that the Amazon logo has an arrow pointing from "a" to "z."

It's supposed to show that Amazon carries everything under the sun (or everything from A to Z). It's also a smile!

Here's another one: Did you know there are tabs on the ends of boxes of aluminum foil that you can pop in so the roll doesn't come out?

Same goes for boxes of plastic wrap. Your food storage game just got taken to the next level.

And no one can forget the day they first learned that Carly Rae Jepsen is older than Adele.

And Ted Cruz is younger than Jennifer Lopez. And Betty White is older than sliced bread.

Well, you're about to have another mind-blowing realization.

This one is about the division symbol (technically called an obelus). This little symbol has a very interesting history...

A recent tweet revealed that the division symbol is actually a blank fraction.

That's right. According to this Twitter user, the lowly division symbol is so much more than just a line and two dots. Each of those dots is actually a stand-in for a number.

Obviously, people were pretty shaken up by the news.

Why didn't our teachers tell us this? What else don't we know?!

You think you know everything there is to know about math, and then BAM! This happens.

The "blank fraction" explanation makes sense, but some people doubted its validity. So, is it true?

Before that, it was used by editors of medieval manuscripts to mark lines that they were unsure about the validity of. For instance, you see a lot of obeluses in Homer to mark lines that old-timey editors doubted Homer actually wrote. In fact, the practice of making such marks in the margins of texts is called  obelism. But eventually, the obelus became the mathematical symbol for division we all know and love today.

Now you have a new fact to teach all of your friends!

But the scholarly facts didn't stop there. After Twitter learned about the obelus, they started sharing fun facts about other mathematical symbols...

Welsh mathematician Robert Recorde designed the equals sign to take the place of the words "is equal to." Apparently, it got tedious writing that every time someone discovered a math thing, or whatever it is mathematicians do.

The word "percent" comes from the Italian "per cento," meaning "for a hundred." But if your number is out of thousandths, you can use a per mille sign instead. It's the same as a percent sign (%) but with two zeroes at the bottom, like this: ‰

OK, that one's not technically true. But did you know that an infinity symbol is also called a lemniscate?

Before long, the thread of math facts took a bit of a turn.

And honestly, we can't say we're disappointed. We're off to buy some frozen pizzas.