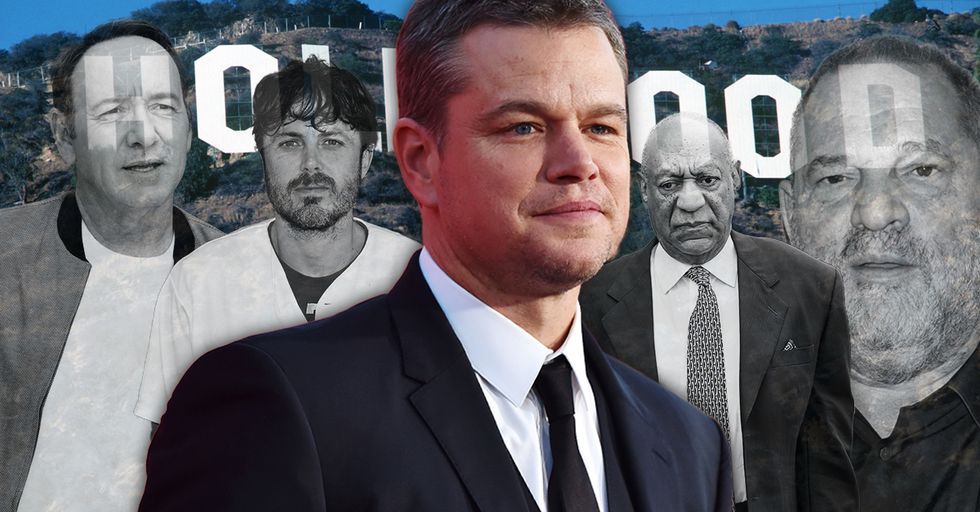 As this reckoning of predatory men is taking place, the absolute most important thing men, women, people of all genders, and especially men can do is listen. Listen to the women who are sharing their experiences and believe them when they say they were affected. And keep your mouth shut.

Some men, so far, haven't listened very well. Chief among the sh*tty listeners is Matt Damon — basically the epitome of the privileged white man. He's made some real dumb-dumb comments as of late about sexual harassment and assault.

But then, something incredible happened. Matt Damon, in a recent appearance on the Today show, rose like a woke phoenix from the ashes of his own white man stupidity, apologized for the comments he's made, and promised to shut his mouth and listen for a while. Halle–frickin'–lujah.

I don't know about you, but I dove headfirst off the SS Matt Damon when he proved he was racist (or at least unaware of his own privileges and biases) on Project Greenlight in 2015.

In the episode, Damon gets into an argument with Effie Brown, a black female producer, about her push to hire a diverse crew to shoot a short film with a main character of color. He didn't want to "undermine what the competition is supposed to be about, which is giving somebody this job based entirely on merit." It was a blatant example of a disregard for institutional racism, and it sucked. He apologized for his comments...kind of, sort of. It wasn't a good enough statement if you ask me.

But Matt Damon wasn't done digging his hole quite yet.

When the allegations against Harvey Weinstein began pouring in, Damon revealed that he pretty much knew about Weinstein's reputation and character. In an appearance on Good Morning America, he said, "I knew I wouldn't want him married to anyone close to me." He continued, "But ... the criminal sexual predation is not something that I ever thought ... was going on." Then, he revealed that he knew the story of how Gwyneth Paltrow was harassed by Weinstein. He "knew [Weinstein] was an a**hole." But he claimed it wasn't his "business."

After seeming to belittle the experiences of women who were harassed and assaulted by Weinstein, he just continued on this unfortunate roll.

When Louis C.K. was accused of harassment by a bunch of women, Damon unloaded about the "spectrum of behavior," continuing to diminish the experiences of these women, who had been traumatized and driven out of their careers by a powerful man's abuse.

It was not a good look, and Damon's old girlfriend, Minnie Driver, ripped him a new one for his insensitive and utterly unhelpful statements.

"Gosh it’s so interesting (profoundly unsurprising) how men with all these opinions about women’s differentiation between sexual misconduct, assault, and rape reveal themselves to be utterly tone deaf and as a result, systemically part of the problem," Driver wrote on Twitter. She told the Guardian:

I felt I desperately needed to say something. I’ve realized that most men, good men, the men that I love, there is a cut-off in their ability to understand. They simply cannot understand what abuse is like on a daily level. I honestly think that until we get on the same page, you can’t tell a woman about their abuse. A man cannot do that. No one can. It is so individual and so personal, it’s galling when a powerful man steps up and starts dictating the terms, whether he intends it or not.

Matt Damon truly epitomized the privileged man who could not wrap his head around a woman's experience.

A strange deficiency for an actor — one who is regularly supposed to enter and understand the personalities and inner workings of others — to have. But nevertheless, here we were: Matt Damon was donezo. Then, a miracle happened, and he apologized for the comments he's made and the way he's been acting...

In an interview on the Today show, Kathie Lee Gifford asked Matt Damon what he has learned from his experiences talking about this movement.

Damon responded, "I really wish I'd listened a lot more before I weighed in on this ... Ultimately what it is for me is that I don't want to further anybody's pain with anything that I do or say. So for that, I'm really sorry." We have a real apology, people!!! It's rare. Soak it in!

It seems he's on the apology circuit because he addressed it again in an interview with AP. Good. Keep saying "sorry," buddy.

"Looking back, I just wish I'd listened before I weighed in on this or I wouldn't have said what I said," Damon said. "I've just been listening to the response, and a lot of it's been really helpful for me, so I'm going to continue to do that. The Time's Up movement is great, and a lot of those women are my dear friends, and I support what they're doing and want to be a part of this change because it's necessary and it's important... I want to go for the ride but I'll be in the back seat, and listen."

Let's just take a second. What he said is great.

Does it excuse his comments? Hell no. Does it erase his probably latent racism and misogyny? Absolutely not.

But he took the feedback that women were giving him, and he reflected.

And hopefully, he will learn from this and continue to listen and be less sexist and racist in the future. Honestly, that's what we need men to do. The bar is so low right now, guys. Come reach it.

Am I back on the USS Matt Damon?

I don't know yet. Time will tell. He has to back up his words with actions (or lack thereof because he's so busy listening). Women need good male allies who use their influential voices to help the movement and not hurt it. Matt Damon has a good chunk of ground to make up, but these statements were an admirable first step.