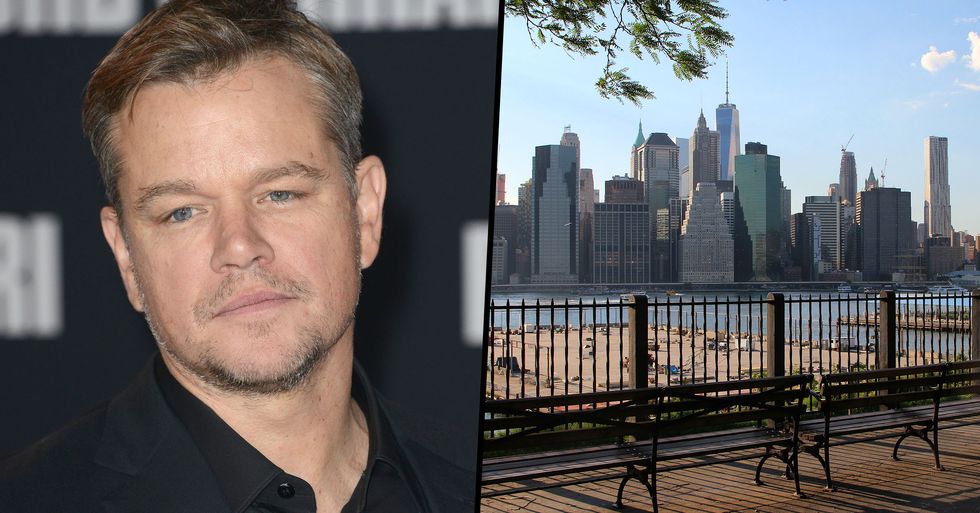 Matt Damon has caused controversy after closing down an entire street so he could have his furniture lifted into his new penthouse. And apparently it made for some really juicy gossip.

Read on to find out how much it costed him as well as what one local resident had to say about the entire event...

The Damons have self-isolation down to a tee.

News has just hit us that they have relocated to a luxury penthouse and it has caused quite a stir.

Over the years, the Massachusetts-born Damon has grown to become one of Hollywood's most celebrated actors.

The actor first rose to fame with the 1977 blockbuster, Good Will Hunting.

Alongside his friend and costar, Ben Affleck, Damon both wrote and starred in the movie, which tells the tale of an unrecognized genius who, as part of a deferred prosecution agreement, becomes a client of a therapist and studies advanced mathematics with a renowned professor.

The movie was an instant success.

And Damon and Affleck went on to win an original screenplay Oscar for their debut project.

This was a huge achievement for the life-long friends...

Damon and Affleck met at the age of ten when they lived a couple of blocks away from one another. They played baseball and Dungeons and Dragons, and, as adults, went on to pursue a career in acting together.

And, following on from his Good Will Hunting success...

Damon went on to star in a number of other major blockbusters, such as Saving Private Ryan, The Talented Mr. Ripley, and The Bourne Identity franchise.

And, in more recent years...

Damon was the star in hugely popular movies such as Martian and The Great Wall.

So you could argue that the man really has done it all.

The actor recently revealed how he and his family are self-isolating during the ongoing pandemic...

And, let's just say, he has pulled out all the stops to make this extra time with his family truly special.

Now, Damon has always been a big family guy.

The forty-nine-year-old actor prides himself on being a good dad to his 4 daughters with wife, Luciana Barosso.

When Damon met his wife, she was a single mom to her daughter, Alexia.

But the actor took the then-4-year-old is as his own, and he still remains as her primary father-figure to this day.

The couple then had 3 more daughters together...

So, amid the ongoing medical pandemic...

It only seemed right that Matt used it as an opportunity to get some much-needed quality time with his wife and daughters.

The actor has recently spoken out about his family's experience in lockdown...

And it wasn't what anyone was expecting.

The Damon's had been self-isolating in the most unlikely of places...

A small town in rural Ireland.

Now, Ireland may not be the first place to spring to mind for that perfect quarantine break...

@nytimes When reading this story I was thinking of John Wayne's movie "The Quiet Man", and how picturesque Ireland… https://t.co/HFJJJk7ZqD
— Jonathan Holleman (@Jonathan Holleman)1589409789.0

But, as this Twitter user pointed out, the Irish countryside is breathtaking, and actually makes for the perfect rural retreat.

In an interview on the Irish radio show, Fully Charged, Damon revealed that he and his family have been staying in a house in Dalkey, a suburb just outside of Dublin, and he had said that it was "incredible."

But now that restrictions are easing up, Damon has decided to move into a new penthouse.

The Oscar-winning actor had the entire street blocked off so that he could sort out the final touches including moving furniture fourteen stories into the building via a crane.

Damon bought the penthouse back in 2018 but it seems as though he hadn't used it much.

And guess how much he bought it for? $16.5 million, which makes it Brooklyn’s most expensive apartment to buy at the time.

A local resident described the events:

“We call the building the Standoffish because it is a little bit of Hollywood dumped in the middle of the more low-key Brooklyn Heights. The lobby is all gold and marble, and the units have Austrian white oak flooring and Italian Carrara marble slab countertops. Paul Bettany and Jennifer Connelly live there, and [Damon] has a triplex penthouse on the 11th and 12th floors and the roof. It is the highest building in the neighborhood, so it has unobstructed views of the Manhattan skyline, New York Harbor, and the bridges."

“He closed off the street all day and parked an enormous big red crane right in the middle of the street. There was no sign of Matt, but he had a huge team of contractors and there were shrubs, decking, and huge crates filled with stuff going up in the air to the terrace. We were all waiting for the grand piano to be wheeled out."

Wow, it seems as though Damon is living his best life.

If you want to read more about how isolation has affected some people more than others, then keep scrolling...