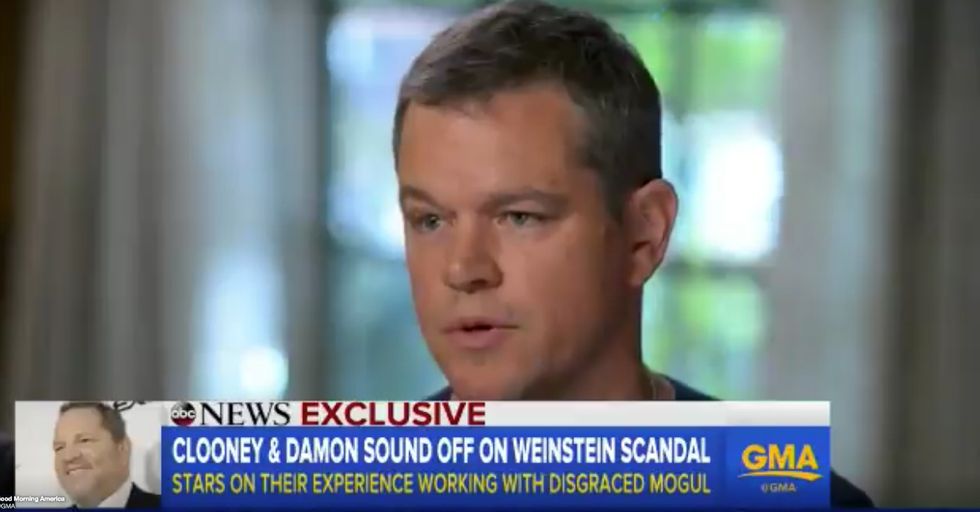 Did Matt Damon Just Let It Slip That He Knew Gwyneth Paltrow Was Being Harassed by Harvey Weinstein All Along?

George Clooney and Matt Damon have been on the press rounds recently for Clooney's directorial effort, Suburbicon. This morning, they stopped by Good Morning America, where they spoke to Michael Strahan about the Harvey Weinstein scandal, which has ballooned ever since it emerged that Weinstein, the famed producer behind Miramax and the eponymous Weinstein company, assaulted over 40 women through the years.

Damon, who has been accused of helping to kill a 2004 New York Times story about Weinstein's proclivities seemed eager to set the record straight.

Harvey was "intimidating" and a "bully," Damon said. “You only had to spend five minutes with [him] to know... That was his legend; that was his whole M.O. – could you survive a meeting with Harvey?"

Still, both Damon and Clooney profited from their respective relationships with Weinstein, and saw their careers launched via their proximity to him. For instance, one of Clooney's earlier vehicles, the Quentin Tarantino directed From Dusk Till Dawn, was a Miramax film. Clooney even counted Weinstein as a friend, and said Weinstein had frequently boasted to him of affairs with actresses. "I didn’t necessarily believe him, quite honestly," Clooney qualified, "because to believe would be to believe the worst of some actresses who were friends of mine." Damon, furthermore, insisted, he hadn't known about the "level of criminal sexual predation." One thing was clear, both Damon and Clooney were aware of Weinstein's reputation. "I knew he was ... a womanizer," Damon said. "I wouldn't want to be married to the guy. But ... the criminal sexual predation is not something that I ever thought ... was going on. Absolutely not." And yet, Damon knew that Weinstein had assaulted Gwyneth Paltrow in the 1990s. "I knew the story about Gwyneth from Ben [Affleck]," Damon said, although he added, "I never talked to Gwyneth about it. Ben told me ... but I knew that ... they had come to whatever, you know, agreement or understanding that they had come to, she had handled it. She was, you know, the first lady of Miramax. And he treated her incredibly respectfully." As to why he never inquired farther, Damon had a startling answer. “When people say ‘everybody knew’ – yeah, I knew he was an a**hole. He was proud of that. That’s how he carried himself. And I knew he was a womanizer. I wouldn’t want to be married to the guy. But that’s not my business." Except now it is.