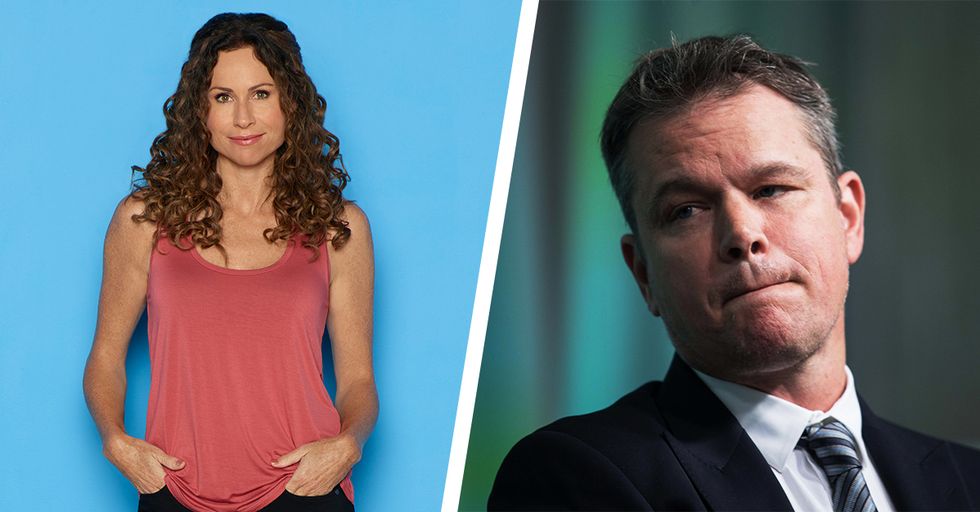 Remember when Matt Damon was charming?

Back in the late 80's and early 90's, Damon had only two substantial films under his belt, Mystic Pizza, and Courage Under Fire (for which he lost 40 pounds). While Damon was critically well received, he wasn't a box office draw yet. Then came Goodwill Hunting, the screenplay that he wrote with BFF Ben Affleck. Goodwill Hunting was both a critical and box office smash, netting Damon and Affleck 10 Academy Awards nominations and two wins (one for best screenplay).

Suddenly, Matt Damon was a bona fide star, but he was still the seemingly humble boy from Cambridge, Massachusetts. Here is he is, in all his bashful glory, telling Oprah about how he still sleeps on an air mattress one year after winning the Oscar.
Charming, right? Underneath all this, however, the telltale signs of undercover douchebaggery were already brewing. In fact, only a year earlier, Damon had already broken up with ex-girlfriend Minnie Driver (his Goodwill Hunting costar) in the most obscene way possible – via Oprah.
On the heels of his award show success, Damon was booked on the media monolith's then talk show, where she asked him who he was dating at the moment. To this, the actor replied he was single – shocking news for then-girlfriend Driver, who'd been watching the interview at home.
The actress later commented:

It’s unfortunate that Matt went on Oprah. It seemed like a good forum for him to announce to the world that we were no longer together, which I found fantastically inappropriate. Of course, he was busy declaring his love for me on David Letterman a month previously.

Why is this troubling, you ask? Damon exemplifies a particularly virulent strain of what we like to call nice guy syndrome. You've probably come into contact with men who engage in this horrifying behavior numerous times before, so you know all the telltale signs. The nice guy is well mannered, has a solid job and proclaims to love women, except he's always the guy who all #NotAllMen, and then gaslights you when you voice a legitimate concern regarding sex, race, orientation, or any other intersectional issue. Not saying Matt Damon exhibits all these "nice guy" tendencies, but he's definitely up there, and this month, nearly two decades after he rudely kicked Minnie Driver to the curb while performing his performative nice guyness, he's back to his old tricks.
The entertainment world (and the world in general) have been rocked by the fallout from the Harvey Weinstein scandal and all the other scandals that have emerged since. Women have attempted to combat the virulent and aggressively embedded tendency with the MeToo hashtag and varying types of advocacy. Prominent men have tried and (with a few notable exceptions) failed at being supportive allies. And who should stride into this murky, bog-ridden morass than Damon himself.
Speaking to ABC, Damon gave his two cents on the Weinstein scandal, which has swept up BFF Ben Affleck along the way.

I think we’re in this watershed moment. I think it’s great. I think it’s wonderful that women are feeling empowered to tell their stories, and it’s totally necessary … I do believe that there’s a spectrum of behavior, right? And we’re going to have to figure — you know, there’s a difference between, you know, patting someone on the butt and rape or child molestation, right? Both of those behaviors need to be confronted and eradicated without question, but they shouldn’t be conflated, right?

You'd think Damon would read the freaking room and know enough to end things there, but nope, he just kept going.

And we live in this culture of outrage and injury, and, you know, that we’re going to have to correct enough to kind of go, “Wait a minute. None of us came here perfect."  … The Louis C.K. thing, I don’t know all the details. I don’t do deep dives on this, but I did see his statement, which kind of, which [was] arresting to me. When he came out and said, “I did this. I did these things. These women are all telling the truth." And I just remember thinking, “Well, that’s the sign of somebody who — well, we can work with that"

There are numerous problems with this statement, all of which are couched in good guy terms of, "let's be reasonable here," and "pooh, pooh, women, you sort of need to back off a little." We could go in and systematically dissect and analyze Damon's words, but thankfully, someone else has done the job. Enter Damon's old inamorata, Minnie Driver.
In a statement to the Guardian, Driver expressed concern with Damon's comments, by which we mean she went in. Gosh it’s so interesting (profoundly unsurprising) how men with all these opinions about women’s differentiation between sexual misconduct, assault and rape reveal themselves to be utterly tone deaf and as a result, systemically part of the problem. Right? But she wasn't done yet.

I have been a victim of each component of the sexual assault spectrum of which you speak. They all hurt. And they a… https://t.co/vp8H7cAjPW
— Alyssa Milano (@Alyssa Milano)1513387354.0

I felt I desperately needed to say something. I’ve realised that most men, good men, the men that I love, there is a cut-off in their ability to understand. They simply cannot understand what abuse is like on a daily level... I honestly think that until we get on the same page, you can’t tell a woman about their abuse. A man cannot do that. No one can. It is so individual and so personal, it’s galling when a powerful man steps up and starts dictating the terms, whether he intends it or not.

There are different stages of cancer. Some more treatable than others. But it’s still cancer.
— Alyssa Milano (@Alyssa Milano)1513387427.0

Driver also explained that men shouldn't be allowed to serve as dominant voices in a conversation they don't truly understand.

I felt that what Matt Damon was saying was an Orwellian idea, we are all equal except that some us are more equal than others. Put abuse in there … that all abuse is equal but some is worse... There is no hierarchy of abuse – that if a woman is raped [it] is much worse than if woman has a penis exposed to her that she didn’t want or ask for … you cannot tell those women that one is supposed to feel worse than the other... And it certainly can’t be prescribed by a man. The idea of tone deafness is the idea there [is] no equivalency.

Driver is not the only female celebrity to speak out against Matt Damon's comments – actress Alyssa Milano also had thoughts, which she shared via Twitter. "There are different stages of cancer," Milano wrote. "Some more treatable than others. But it’s still cancer." Indeed.