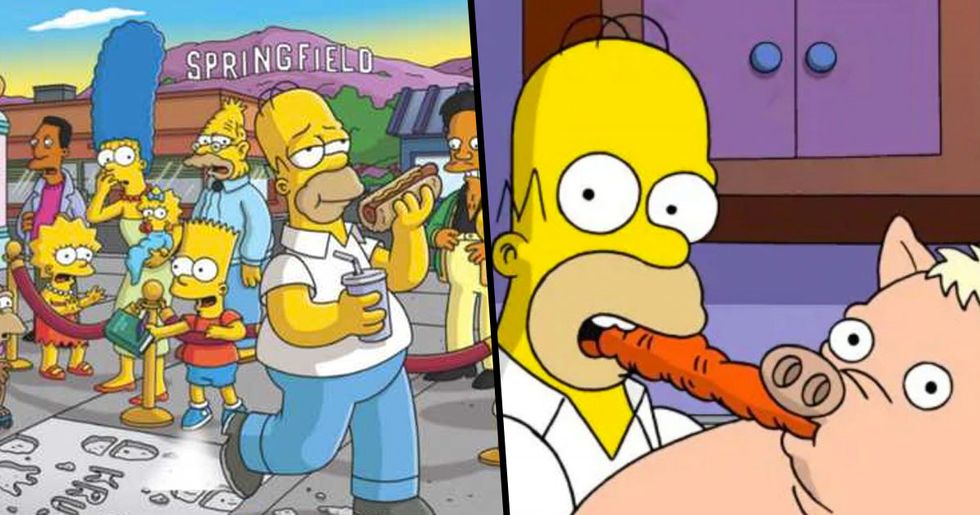 It's been over a decade since The Simpsons Movie hit the box office, introducing us to that spider pig song, giving us a cameo from the one and only Tom Hanks, and, of course, bearing striking similarities to Stephen King's Under the Dome, and it's looking like we're in for a sequel to the animated comedy classic.

The show's creator, Matt Groening, confirmed the project this weekend, but the announcement wasn't all rainbows and sunshine as you'd expect, because it seems, according to Groening, that there's been a pretty big reason why a sequel hasn't been in the pipeline until now.

The recent announcement of a second The Simpsons movie has also conjured up a lot of mixed-reactions online.

So keep reading, because we've got all the details coming up.

The Simpsons TV show has been a cult classic for decades.

We were first introduced to the dysfunctional Simpsons family, consisting of Marge, Homer, Bart, Lisa, and Maggie, in December 1989. Since it first aired, the animated comedy sitcom has cemented itself as one of the greatest comedies of our time (or at least of the nineties anyway, as some people argue).

And, in 2007, fans were elated to see a movie rendition of the show.

There's no better feeling than when your favorite show finally gets its box office debut, although there's always the worry that it won't live up to expectations. The Simpsons Movie is certainly one of those that garnered mixed feelings. Featuring the same writers and cast as the TV show, the movie follows Homer, after he accidentally pollutes Springfield's water supply, causing the entire town to be encased in a gigantic dome by the EPA, leaving the Simpsons gang declared fugitives.

The movie was a box office success, but a select few avid fans didn't see the hype.

Grossing over $500 million should have been a big win, and, for the most part, it was. The movie received a respectable 7 out of 10 rating on IMDb, with many fans saying that they enjoyed the movie. Although some flocked to various social media threads to express their hatred for the movie. One user on Game Spot said: "I thought all the jokes were childish and it recycled too many old gags from the series. It was very safe and didn't break any boundaries." But, you can't please everyone.

And now, to some fans' delight and to others' dismay, it looks like we're getting a second Simpsons movie.

It's looking like our favorite satirical family from Springfield will be hitting the big screen again.

While appearing at this year's Comicon in San Deigo, Groening spoke about the potential for a sequel...

Speaking at the event, Groening said: "No doubt there will be another Simpsons movie one of these days. I think Disney wants something for its money." The franchise was inevitably snapped up by Disney after the Hollywood giant bought 20th Century Fox (which, funnily enough, The Simpsons actually predicted years ago - but that's a story for another day).

And it's looking like Disney will want to make the most of this takeover.

Disney opting to greenlight a second movie is very, well, Disney.  We aren't exactly surprised that the Hollywood studio wants to get the ball rolling with The Simpsons' return to the box office - they clearly want to get the most out of their buck.

But Groening also revealed the real reason that a second movie hadn't been in talks until now.

While speaking at Comicon, Groening was brutally honest about the first Simpsons movie, and what he had to say is pretty shocking...

"This is a true answer. The first Simpsons movie almost killed us. "We didn’t have a B-team waiting to do The Simpsons Movie, so the same people who wrote, animated, voiced and did the music for The Simpsons TV show also did the movie," Groening explained.

And he claims that the show is still feeling the effects now...

"That was in 2007. We're almost recovered, almost," he said. So, Groening doesn't seem overly thrilled by the concept of another movie.

Although no official date has been set, fans have still been quick to share their views on the latest Springfield-themed news.

Once again, there were mixed feelings. Several fans seemed to be pretty excited about the announcement, whereas others, well, not so much.

Some users had very strong opinions about the news.

Like this Twitter user, who wants the show to close its curtains for good, in lighter terms. We still anticipate that the movie will be a big hit - even if people are heading to theatres just out of curiosity, or in the hope that the movie will revive their love for the show. Although many agree that the animated sitcom has had its day, there's no denying that it is a comedy classic, with one of the many long-running gags being the hilarious signage. You know, that blink-and-you-miss-it stuff that's actually comedy gold. So, from the laugh out loud to the shocking, here are thirty-three of The Simpsons' most hilarious signs...