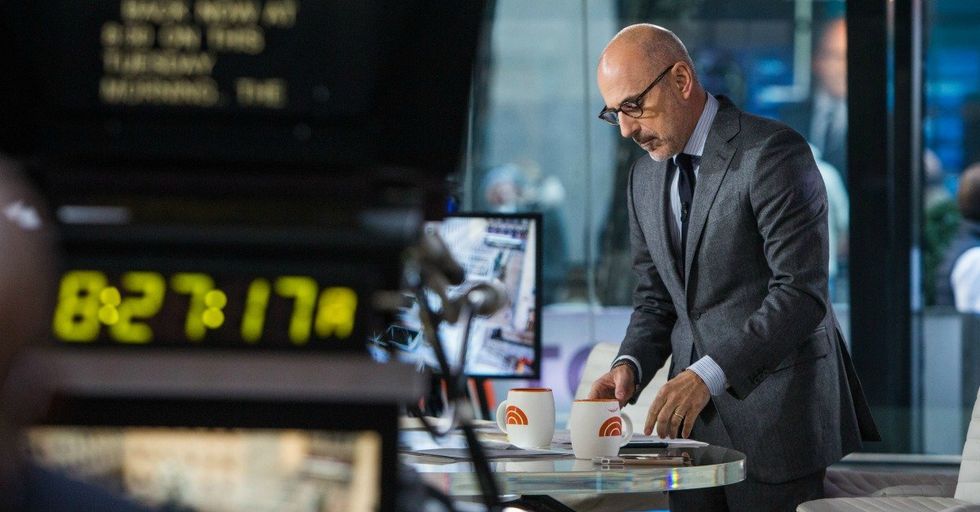 Matt Lauer Breaks His Silence After Being Fired for Sexual Misconduct

One day after his firing from NBC's Today show as a result of allegations of sexual misconduct, co-anchor Matt Lauer has broken his silence. Lauer's Today co-host Savannah Guthrie read his apology on air Thursday morning.

Matt Lauer has been a staple of American morning television for more than 20 years, and news of his behavior and his abrupt firing shocked and shook many people who've watched him in their living rooms day in and day out.

On the morning of Wednesday, November 29, Matt Lauer was fired from NBC for "inappropriate sexual behavior" in the workplace.

Lauer had been a co-host of the Today show since January of 1997, covered the Macy's Thanksgiving Day Parade every year, and was a regular correspondent for NBC during several Olympic Games.

But when an employee filed a complaint against Matt Lauer for "inappropriate sexual behavior," he was promptly dismissed from NBC.

While this news came as a shock to many, CNN reported that fellow NBC colleagues of Lauer's weren't completely surprised — several major news outlets had been investigating claims against Lauer for a while.

In NBC's statement about Matt Lauer's firing, Chairman Andy Lack wrote, "We were also presented with reason to believe that this [complaint] may not have been an isolated incident."

And mere hours after the initial announcement of his firing, this proved to be true. Variety reported accounts of three women who accused Lauer of sexual harassment. He once gave a colleague a sex toy as a present. On another occasion, he summoned a different female employee to his office and dropped his pants. Included in the report was the beyond creepy detail that Lauer "had a button under his desk that allowed him to lock his door from the inside without getting up."

It seemed as if Lauer's habit of sexually harassing female co-workers was another one of those "open secrets" that no one confronted for far too long.

Matt Lauer has been terminated from NBC News. On Monday night, we received a detailed complaint from a colleague ab… https://t.co/pxSqWaDy6q
— TODAY (@TODAY)1511957300.0

It took one brave woman filing a formal complaint about Lauer for the pattern of abuse to finally stop. On Wednesday morning, an emotional Savannah Guthrie read Andy Lack's statement on the firing of her "dear, dear friend" Matt Lauer.

And on Thursday morning, Guthrie was again forced to bear the brunt of responsibility in reporting on her former co-host's disgusting behavior.

On the Today show on Thursday morning, Guthrie read Matt Lauer's full statement of apology in the wake of the allegations against him...

"There are no words to express my sorrow and regret for the pain I have caused others by words and actions," Lauer's statement began.

A statement from Matt Lauer: “There are no words to express my sorrow and regret for the pain I have caused others… https://t.co/deNA8kkzsA
— TODAY (@TODAY)1512043569.0

"To the people I have hurt, I am truly sorry. As I am writing this, I realize the depth of the damage and disappointment I have left behind at home and at NBC."

"Some of what is being said about me is untrue or mischaracterized, but there is enough truth in these stories to make me feel embarrassed and ashamed. I regret that my shame is now shared by the people I cherish dearly."

"Repairing the damage will take a lot of time and soul-searching and I’m committed to beginning that effort. It is now my full-time job. The last two days have forced me to take a very hard look at my own troubling flaws. It’s been humbling. I am blessed to be surrounded by the people I love. I thank them for their patience and grace."

Obviously, many on Twitter had strong reactions to this statement.

While Lauer didn't deny that there was some truth to the allegations, he did deny the extent of these women's claims. It's also pretty rich that he didn't realize the "depth of the damage and disappointment" he was responsible for when he was dropping his trousers in front of female employees and locking them unwillingly in his office. Only now, after being caught, is he "truly sorry."

Others were impressed by his statement.

At least he didn't say, "I apologize if I've offended anyone." But he did dismiss the severity of the claims and that whole last paragraph was pretty self-serving if you ask us.

In his more than 20 years on air, Matt Lauer has demonstrated time and again on air and behind the scenes that he doesn't respect women or treat them as equals. While we all may not have been aware of the extent of his actions, his behavior has been facilitated by those around him who refused to stand up to him. It's beyond time for Matt Lauer's reign to end and for the rise of the women he worked so hard to belittle and hurt.