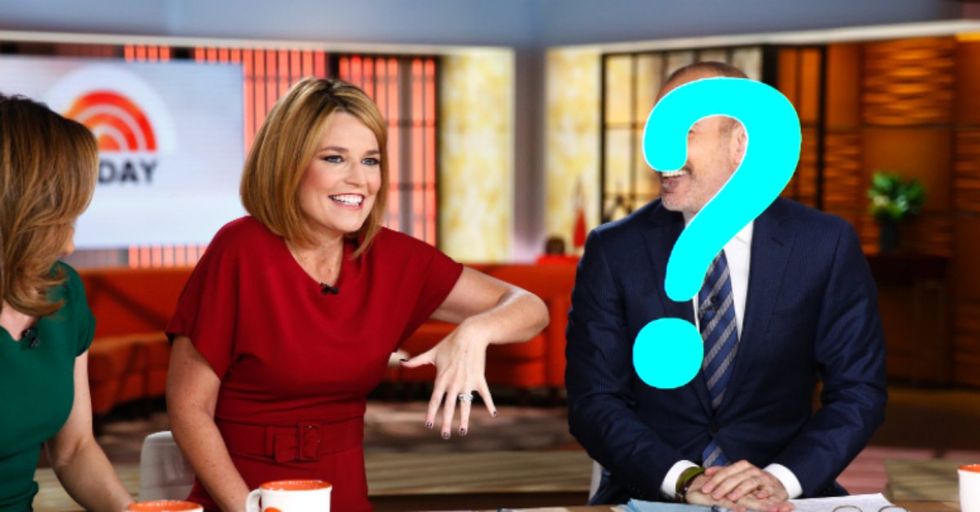 Matt Lauer Has Officially Been Replaced on the 'Today' Show

Back in November of 2017, Today co-host Matt Lauer was fired due to sexual misconduct. It was one of the biggest bombshells dropped in last year's great reckoning of creepy men. (Boy, doesn't it feel great to refer to 2017 as last year?)

After Lauer was fired, fans of the Today show were left wondering who was going to replace him. On January 2, 2018, they finally got their answer as Savannah Guthrie welcomed her new co-host to the show.

As more information came out about Matt Lauer, his firing made more and more sense.

Lauer had a long history of behaving inappropriately — particularly toward women. He once sent one of his female coworkers a sex toy and then told her that he wanted to use it on her. This in addition to regularly making inappropriate remarks about what women on the show were wearing.

He even had a secret button installed under the desk in his office.

Apparently, the button allowed him to close and lock his doors without having to get up from his seat. All in all, pretty creepy stuff. Suffice it to say, we were not sad to see him go.

Lauer had co-hosted the Today show for nearly 20 years. Naturally, there were a lot of reactions to the news that he had spent those decades harassing the women around him.

Many people wondered how Ann Curry — whose 2012 firing Lauer was largely responsible for — was reacting to the news. But aside from the jokes, shock, and tales of comeuppance, people were wondering something else. Something important to those who wake up every morning and turn on the TV to get their news.

Who was going to replace Lauer?

Savannah Guthrie, who had been Lauer's co-host for years — obviously does a great job every morning, but she needed a permanent co-host. Past Today hosts include Katie Couric, Barbara Walters, and Meredith Vieira. People immediately started wondering who would become the new co-host of the show.

Some even pointed out how great it'd be to have two women hosting the show.

It'd be the first time a major morning show was permanently hosted by two women! As of Tuesday, January 2, we now know exactly who will be sitting behind the desk as Guthrie's co-host...

Tuesday's Today show opened with Savannah Guthrie announcing that Hoda Kotb was officially the co-anchor of the show. "This has to be the most popular decision NBC has ever made, and I am so thrilled!" Guthrie said. "Hoda, you are a partner, and a friend, and a sister, and I am so happy to be doing this."

Hooray for Hoda! Hooray for women! Hooray for 2018, which hopefully, maybe, just maybe won't be quite as awful as last year.

After spending the last few months getting toxic men out of positions of power, it is so refreshing to see women reclaim those spaces and totally rock their roles.

Who knows? Maybe 2018 will be a banner year for women everywhere. We'd love to see more women news anchors, CEOs, entrepreneurs — you name it. There's a whole new generation of women who will grow up watching two women discuss the morning headlines on the Today show, and that's pretty dang awesome.

This is the second huge change in Kotb's life over the past year. In March of 2017, she adopted her daughter Haley Joy.

"It’s one of those things where you think you’ve done it all, you think you’ve felt it all," she said about becoming a mother. "But I just didn’t know that this kind of love existed." "I wake up sometimes and go, ‘Oh my God, I have a baby!’ " she says with a laugh. “But it feels totally real. I guess if you’ve been waiting this long for something, and you wish for it, pray for it, hope for it, wonder if it will ever be, and then it happens, nothing’s more real. Nothing."

"You don't have to move mountains. Simply fall in love with life," the quote reads. "Be a tornado of happiness, gratitude, and acceptance. You will change the world just by being a warm, kind-hearted human being." We couldn't be more thrilled for Kotb's new role. We look forward to seeing her and Guthrie shine on television every morning.