Matt Lauer Texted Hoda Kotb 'Congratulations' After She Replaced Him, but Here's Why That's Not the Whole Story | 22 Words 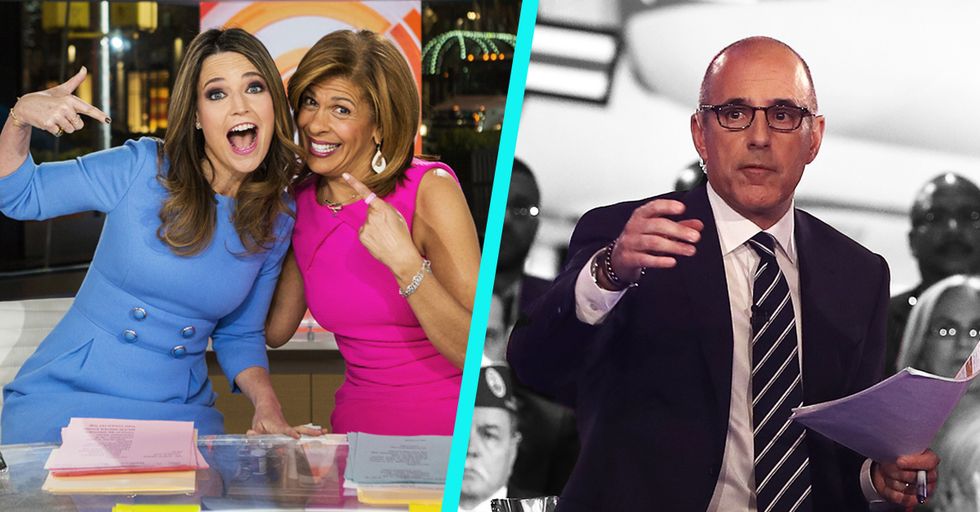 Matt Lauer Texted Hoda Kotb 'Congratulations' After She Replaced Him, but Here's Why That's Not the Whole Story

Ever since his dramatic firing on November 29, when reports emerged that Lauer was a predator of the most despicable sort – the type who preys on those unfortunate enough to be under his power – Lauer has been persona non grata. He's slunk off to wherever it is people like him slink off to when their depredations are uncovered.

At least, that's what we thought.

Imagine our surprise then, when we discovered via E! News, noted purveyor of all fluffy and shallow journalistic endeavors, that Lauer was not only back, he was sending fawning texts to his new replacement, Hoda Kotb.
Before we alarm you any further, and cause visions of slickly dressed newsmen with nefarious office-locking-buttons to dance in your head, let us clarify that Lauer isn't back in the physical sense, merely the hovering at the edge of your periphery nefariously sense. If that makes any sense... No? Ah, well, we tried.
In any event, as E! breathlessly reports, Kotb "revealed Lauer [that] was among those who privately congratulated her on the promotion." Kotb is quoted as saying, "He was sweet this morning. Certain texts popped up, and there was one from Matt: 'Congratulations!' And he said some nice words."
All very good and well, right? Lightness in the air, no ill will as one anchor replaces another. You might even imagine Lauer sending Kotb a basket of flowers, or muffins, or whatever it is that competing news anchors send each other when one gets the one-up over the other.

In fact, Kotb was not the only one Lauer, in all his graciousness, was gracious to. He's also been in touch with co-host Savannah Guthrie, who, as per E!, stated:

We've kept in touch and we've all been reaching out and, you know, I don't think there's anyone who would be more thrilled than Matt to see Hoda in this role. He adores Hoda and he knows how good she is and so I know that to be true.

Again, all sunshine and strawberries, right? Wrong. Here's why this sort of thing is problematic...
This whole article, in fact, this whole stated interaction normalizes a serial predator. As E! itself acknowledges, "Lauer has stayed out of the public eye since he was fired from NBC News in November amid allegations of sexual misconduct."

Matt Lauer has reportedly been sending critiques to 'Today' producers about recent episodes — after being fired for… https://t.co/Au2RQjBjR0
— Business Insider (@Business Insider)1515081572.0

And by allegations of sexual misconduct, we mean he routinely made it a habit to sexually harass, demean, and assault his coworkers. Remember that button? He used it to lock unsuspecting women in his office. Or how about the time he sent a coworker sex toys, or all the times he coerced younger, less powerful women into sexual relationships?

By now, you're probably going, "oh, pooh, pooh, so he had a few relationships with a few coworkers. They wanted it – they wanted to get ahead." Honestly, we can understand why you would feel that way. 2017 was an overwhelming year. Case after case of sexual assault, and all those grey areas.
Let us quote to you, however, from one of the seminal texts of 2017, the article How #MeToo Exposes the Myth of Sleeping Your Way to the Top (an excellent read, if you've got the time). Writer Erin Gloria Ryan opens it with this witticism, "If women sleep their way to the top so frequently, then one would think there’d be more women at the top."
She then goes on to explain:

Recent history shows us that women who try to weaponize their sexuality are, at best, sleeping their way to being the top’s plus-one to the CAA Oscar party. The men who do it are using their sexuality to negate, erase, bully, intimidate, and ultimately chase women out of their industries. Maybe we should stop accusing women of “sleeping their way" to the top. Maybe because men have been the ones sleeping women to the middle and bottom.

Back to Matt Lauer, because you can't talk about him without talking about specifics. So here's a specific you can sink your teeth into. In December, former Today show production assistant Addie Collins Zinone released a heartbreaking first person account of her affair with Lauer and its repercussions.

Addie Collins Zinone speaks out about the backlash she got after revealing her consensual affair with Matt Lauer… https://t.co/jb6nw28OxZ
— Access (@Access)1513651500.0

As Variety explains, Zinone was 24 when she approached the 40-something year old Lauer for career help. Instead, he seduced her. "Intimidated by his stature, she gave in to his flattery, and... entered into a month-long relationship with Lauer, who would arrange to secretly meet her in his dressing room."
By now, you may be thinking this is all just water under the bridge. It was consensual, blah blah blah... But read how Zinone describes the affair affected her:

I changed physically. I changed emotionally. Fear crept into my life. I became unsure of myself. Any confidence I had was gone. For him, it was a conquest. One afternoon, he told me to come see him in his office. I thought he was finally going to talk to me and encourage me professionally. I wanted to hear from him that I could succeed in West Virginia [where she'd just gotten a job as an anchor]. I sat across from him, and he pushes a button from his desk and the door shuts. It was embarrassing, because his secretary was sitting outside.

Finally, after all was said and done, and Zinone was onto the next job, the magnitude of what had happened sunk into her.

My experience on air as an anchor turned out to be so traumatic that I quit. I was in a depression. This man who I’d held on a pedestal had made me feel like my looks and my body were my true assets. He made it clear that he wasn’t interested in my skills or my talent. It just shattered everything.

So here's the thing. Lauer, by weaponizing his power and influence to prey on the women who looked up to him destroyed countless lives and careers, did so with a $25 million paycheck and an army of producers and lawyers at his back. His victims went home wounded. They did not have his resources, they did not have his power. So let's not talk about the nice texts he sends the former co-stars he's known to have undermined, let's not talk about his gracious gestures like he's some fairy queen at a tea party. It is not okay to normalize Matt Lauer or men like him. It is not okay to give them a pass and welcome them back into the fold. Matt Lauer is a self-admitted predator, and he needs to do what all predators need to do – go away and be forgotten, so his victims can finally start the process of healing.