Matt Lauer's Wife Just Kicked Him out of the House, but Their Entire Saga Is Pretty Insane | 22 Words 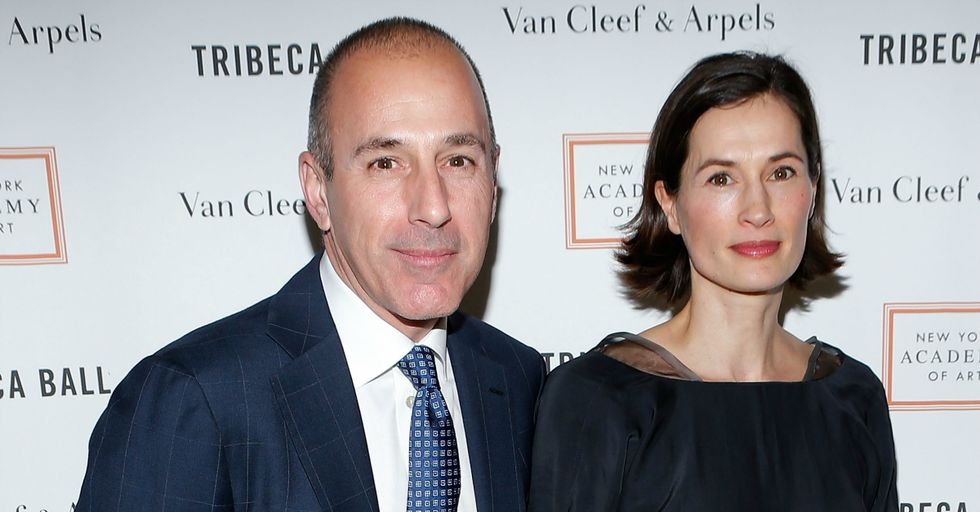 Matt Lauer's Wife Just Kicked Him out of the House, but Their Entire Saga Is Pretty Insane

It seems that Matt Lauer's wife Annette Roque has finally had enough.

The disgraced former Today show host and the former model have been married for nearly 20 years, but the relationship couldn't survive multiple accusations of disgusting sexual misconduct in the workplace. Go figure.

In late November, Lauer was abruptly fired from NBC due to several allegations of "inappropriate sexual behavior" in the workplace.

One of the country's biggest morning TV stars was suddenly no more, and while his many of his colleagues weren't exactly surprised, it was still a mighty blow to those who'd been fans of his and let him into their homes every morning for decades.

As the story developed, more awful details about his behavior emerged.

It was revealed that he once gave a female colleague a sex toy as a gift and then told her how he wanted to use it on her. He also had a button under his desk that would lock the door of his office from the inside without him having to get up. Guess what he used it for? Yeah. So gross.

Months later, Matt Lauer's wife has finally kicked him out of their Hamptons house.

The couple has been together for nearly two decades, and they have three kids — one of whom is away at college. Page Six reports that Lauer is staying at a house nearby so he can remain close to his kids.

Roque hasn't officially filed for divorce, but it seems like that may be coming down the pipeline.

In December, The Cut reported that she had met with a high-powered law firm about "squeezing a bigger settlement out of him if they proceed to a divorce." Get it, girl. There's no doubt that predator put her through a lot.

But here's where it gets crazy...

This isn't the first time Annette Roque has considered divorcing Lauer. According to Page Six, they've been living entirely separate lives for almost 10 years — Roque lived in their house on Long Island and Lauer stayed in their apartment in Manhattan during the week. And way back in 2006, Roque actually filed for divorce...

At the time she cited "mental abuse, extreme mental and emotional distress, humiliation, torment, and anxiety." The guy is a monster.

However, she withdrew the filing after only a few weeks.

According to Page Six, she did this because "he offered her a postnuptial agreement and millions more dollars." A small price to pay for keeping up the illusion that he wasn't a totally gross human being, I guess.

Lucky for Lauer, he was paid an obscene amount of money at NBC, so forking over cash shouldn't be a big deal for him.

He was making $20 million a year at the network, and according to Page Six, "he owns a $36 million compound in North Haven, a house in Sag Harbor, and a 40-acre horse farm in Water Mill."

But Lauer isn't giving in without a fight.

Apparently, the guy is still trying to save his marriage, which it seems has been over for much longer than these revelations about his behavior have been public.

A source close to Lauer told Page Six that he's still fighting to try and save his marriage but Roque "is being very cold."

As she should be! He's been tormenting her and mentally abusing her for 10 years. Turns out the goofy guy on morning television had a much more sinister private life than we could have imagined. This move toward holding sexual predators responsible for their actions is saving a lot more people than we might think.