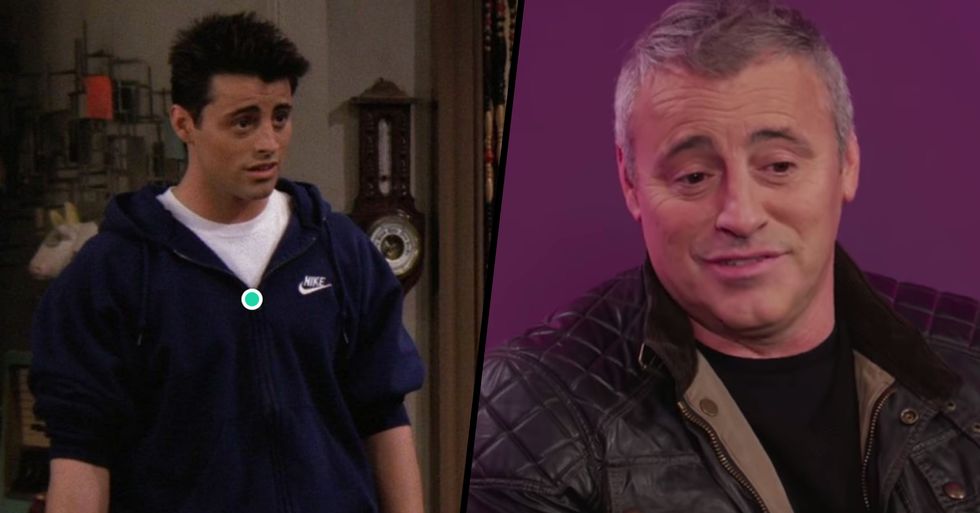 Friends is one of those rare television shows which just never seems to go down in popularity. Whether it's the universality of the storylines, the ongoing genuine humor of the jokes, the amazing '90s fashion or the fact it remains (we're hoping permanently) on Netflix, it's a good, dependable show. Whether you're re-watching it for the nostalgia factor, or discovering it for the very first time, you have a safe bet when it comes to watching Friends.

But now Matt LeBlanc has revealed that starring in the world's most popular sitcom wasn't always a great thing.

This is Matt LeBlanc.

He's an American actor, comedian and TV host, born in 1967. He first rose to fame thanks to a 1987 Heinz Ketchup commercial - but received international recognition thanks to the 1994 sitcom, Friends.

Joey was one of the show's 6 main characters, as was a slightly dumb but kind-hearted failing actor and successful womanizer.

He went on to do a Friends spin-off, called Joey. The show did not follow in the success of its parent show, however, and was canceled in 2006 due to poor ratings.

Almost 25 years after its first broadcast, Friends has retained its popularity.

It seems to air almost constantly on one cable channel or another, and was recently kept on Netflix with a cool $1 million payment.

In spite of his somewhat problematic behavior, Joey remains firmly a fan favorite - likely because of his charmingly relatable ditziness and extreme, heartwarming loyalty.

LeBlanc is now 51, and although he still looks fantastic, he doesn't look exactly like the Joey we all collectively remember.

Joey has a full head of glossy, brunette hair, and a smooth, wrinkle free complexion, while LeBlanc is giving us more of a silver fox vibe.

Which led to this anecdote.

LeBlanc shared a pretty funny story relating to his change in appearance on Live with Kelly and Ryan.

He was asked about the legacy of Friends.

A whole new generation have recently become entranced with the show, thanks to its appearance on Netflix.

It's never nice to hear about the fact of your aging - especially when it's so extreme you're told you look like your own parent!

Although as the show started in 1994, it's kind of feasible.

If the show were being cast now, 25 years on, it's likely Leblanc would be more considered for a "parent" role. Time sure flies - and now we feel old, too!

We hope LeBlanc is feeling okay in the wake of this news!

We guess nothing lasts forever.

At least we have the good times - hours and hours of classic Joey footage, ready to stream at any given moment.

We guess you've got to laugh.

As the Friends theme wisely says, "so no one told you life was gonna be this way."

We can only imagine Joey's reaction.

As a guy who prides himself on being super attractive (particularly to the ladies) we can't think that Joey would be too pleased to be compared to his own father.

His reaction to turning thirty was interesting.

To say the least. In this classic Friends episode, Joey is absolutely distraught when he and his friends hit the big 3-0.

And remember when he showed off his acting range?

Although, we have to say, pretending to be old is quite a big step from being mistaken for your own father!

There was another iconic Friends scene people drew attention to.

In this, now highly ironic, storyline, Joey is cast as a 19-year old. Chandler questions whether the 30-something can pass for so young - but Joey is adamant that he can.

If he thinks he can pass for 19, how would he feel about looking 51?

Although, we have to say, it seems LeBlanc is taking it far better than Joey would. Plus, he looks great! Just... not particularly young.

So don't worry about the haters!

There's nothing wrong with getting older - plus, you're only as old as you feel! As some commenters pointed out, LeBlanc still has a full head of hair and is conventionally handsome - so things could definitely be a lot worse.

Although the "wisdom" found in Joey's eyes may be questionable, there's no denying LeBlanc looks distinguished and still undeniably hot.

Joey has always been known to accept his quirks.

In fact, he was surprisingly body-positive and was always confident in his appearance.

So maybe Joey would be ok after all.

We think it's great that LeBlanc is embracing his age - and his stylish grey hair. When paired with his signature smile, it's a winning combo.

You got this, Joey.

We think you look great - and anyone who doesn't recognize you is simply too young to remember the glory days of Friends.

And now LeBlanc has made another revelation.

He spoke out on The Kelly Clarkson Show about one particular invasion of privacy.

"I remember one time, it was during the week, I had been flipping channels and watching the news and for some reason, they had a split-screen on the TV, six quadrants."

"Each was a live shot of each one of our houses, like a helicopter shot. I was watching it and there was no information or news, it was just showing houses."

There was an upside, though!

"I remember looking closely at my house and thinking ‘F— I need a new roof.' So the helicopter flies away and I get the ladder and I go up there." Trust LeBlanc to find a silver lining... Want more Friends content? Scroll on for the guess-who game that's perfect for staying home.