Matt Weiner, the Creator of 'Mad Men,' Is Under Fire for Sexually Harassing an Emmy Winning Writer and Then Firing Her | 22 Words 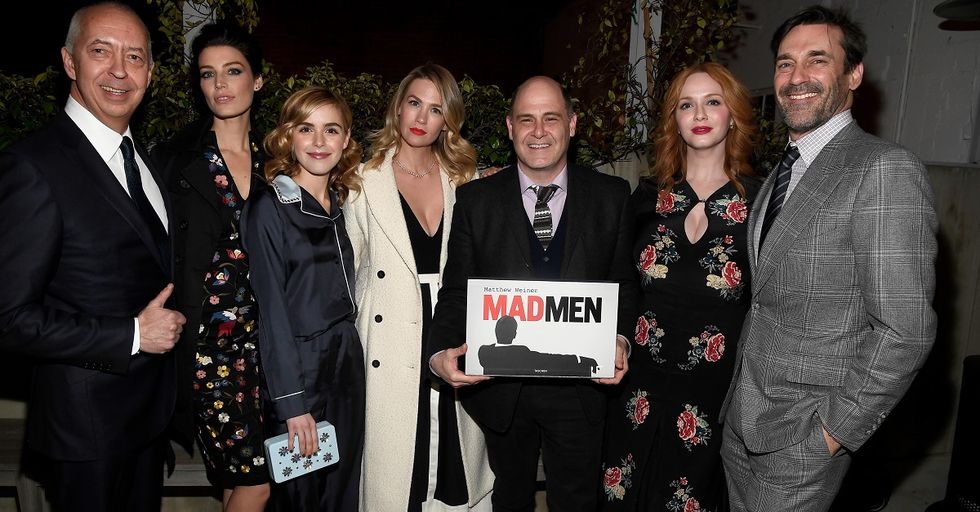 Matt Weiner, the Creator of 'Mad Men,' Is Under Fire for Sexually Harassing an Emmy Winning Writer and Then Firing Her

The tides are turning in Hollywood as more and more men with a history of harassing and abusing their female colleagues are being outed. Recently Matthew Weiner, the creator of Mad Men, was accused of harassing Kater Gordon, who had started on the show as his personal assistant, worked her way up to the show's writing staff, only to be fired mysteriously after winning an Emmy. Oh, and also refusing to let him see her naked.

During the Mad Men era, it was no secret that the women on screen didn't have it great.

The show's world was set on Madison Avenue in the 1960s, a time when a women weren't valuable employees in the same way men were. They were more like typewriters that smiled at you in the morning and could fetch coffee.

Oh, and also they had boobs.

The writers certainly never shied away from depicting the very real and very bad treatment women received working alongside men in the 1960s. But behind the scenes, it turns out, one female writer was getting to experience some of this treatment first hand.

Writer Kater Gordon is spilling the beans about her sudden and mysterious departure from the Mad Men writing staff.

She'd worked her way up the ladder from Weiner's personal assistant, to the show's writer's assistant, to a full time staff writer in her own right. A career path that's certainly a dream for lots of hopeful Hollywood writers.

Gordon performed so well on staff, she even won an Emmy for her work.

Though people are now noticing the uncomfortable nature of their acceptance speech, in which Weiner jokes that "only one of us is allowed to speak." Sure enough, Gordon never gets a word in edgewise on what was easily the biggest night of her career.

Gordon is now coming forward with the fully story: that Weiner had demanded to see her naked. And she refused.

“He told me that I owed it to him to let him see me naked," she told The Information. Gordon dismissed the remark and continued working, but the repercussions of the incident were far from over.

After the incident, she was brought on as a full time staff writer.

However, things had changed for Gordon thanks to Weiner's behavior. Another longtime staff writer, speaking anonymously, told The Information that "I could see her confidence was shaken." And noted that "It was obvious something had changed."

Gordon talks about how the incident made it difficult to see her boss in the same light.

“I did my best to play along but couldn’t divorce him from the comment, and I lost respect," she told the Reporter. It was a few months later that they had their Emmy win and awkward acceptance speech. Gordon says she had a hard time enjoying the night, and even left the after party early.

A few weeks after her Emmy win, she was fired over the phone by Weiner.

“He told me I was terrible at everything, from my work in the writers room to on set." she told the website. Which must be a strange thing to hear from your boss just weeks after accepting the highest award your industry bestows.

Gordon says the experience put her off writing, and the Entertainment industry in general.

Her sudden departure from the show had everyone talking, and instead of answering questions about it, she left Hollywood. She now lives in Palo Alto, where she is working to set up a non-profit for victims of sexual harassment called Modern Alliance. She's been working hard to move past the incident, even at one point reportedly requested the Emmy win be removed from her bio.

The whole story is a great example of the lasting harm women suffer when they're harassed.

Kater Gordon was a talented, young writer who won an Emmy, and instead of using it to go on to make her own projects, she had to deal with the fact that the man who hired her thought she "owed" him sexual favors for her rise. Gordon talked about how her confidence was shaken by the incident, and while Gordon dealt with this, Weiner went on to collaborate with some interesting people.

Craziest part of this story is that, until recently, Weiner was working on his new @amazon show with both Roy Price… https://t.co/cSbay5iL3l
— Matt Wilstein (@Matt Wilstein)1510271288.0

The rep also claims Weiner is a champion of egalitarian environments. Which generates more than a little side-eye from us, considering his most recent project he chose to work with Roy Price and Harvey Weinstein, two men who have since been removed from their positions for sexual harassment. Harassment that many claim was an "open secret" in an industry that until about six weeks ago seemed to quietly tolerate predatory men.

But Weiner is doubling down on his denial.

While promoting a book he wrote about a potential rape, yikes, Weiner used a question from the audience about women losing mentor opportunities to deny the allegation outright. So, I guess his argument here is that Gordon left behind her career, and life's work, because she mis-remembered something. Sure, and Louis C.K. was just adjusting himself.