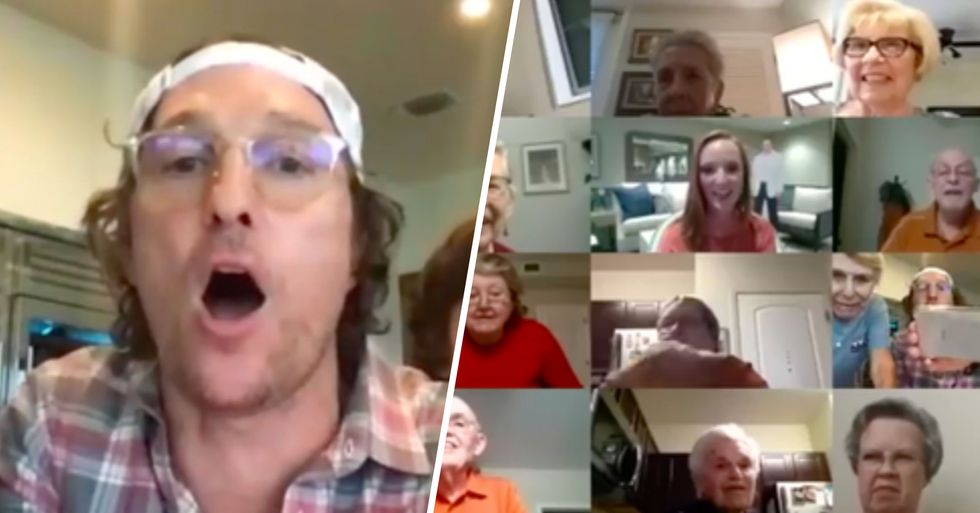 The actor recently tried his hand as a bingo caller in a virtual version of the game for residents at a senior facility in Texas, and it is the most heartwarming thing you'll ever see.

Keep scrolling to watch footage from his incredible game for yourself...

Matthew McConaughey recently brought a lot of happiness to an unsuspecting group of elderly residents.

While millions of us remain in quarantine as a result of the ongoing medical pandemic, the actor decided to help out a group of those considered as some the most vulnerable.

Because it is our elderly residents who are by far at the highest risk from the deadly virus.

The virus, which has brought the world to a complete standstill, is considered most dangerous to the elderly and those who suffer from existing health issues.

But these quarantine sanctions can bring with them a whole array of their own issues.

It is undeniably a difficult time for everyone at the moment, but for the elderly to be isolated away from their families, overwhelming feelings of turmoil and loneliness are bound to be experienced.

And our nursing homes have taken a huge hit during the pandemic...

And this is where McConaughey stepped in.

He devised together a plan to lift the spirits of those residing at The Enclave...

As he clarifies the lucky drawn number, 2 residents suddenly shout out "Bingo!", in which the actor and his family yell in celebration.

He makes for the most passionate bingo caller of all time.

“Richard Black just waving a hammer up high!" McConaughey exclaims, as his family excitedly applaud around him. “We got Charles King in the iPad up high! We got two winners!"

And the look of joy on the residents' faces was simply undeniable.

In March, the actor took to Twitter to offer some very wise words regarding the ongoing pandemic.

So, as a thank you, the residents decided to hold up their own "green lights."

One of the facility's workers said:

"I wanted to say, from all of us, we want to continue to turn a red light into a green light," as all the players held up their own green pieces of paper with inspirational messages written on the front.

As they held up their signs, the actor exclaimed loudly...

You can watch a snippet of McConaughey's bingo game here.

What an amazing gesture. To read more about the kind gestures of the rich and famous, and to hear what other celebrities are doing to spread a bit of kindness, keep scrolling...