Monica and Chandler's love story was one of the major plot points of Friends. | 22 Words 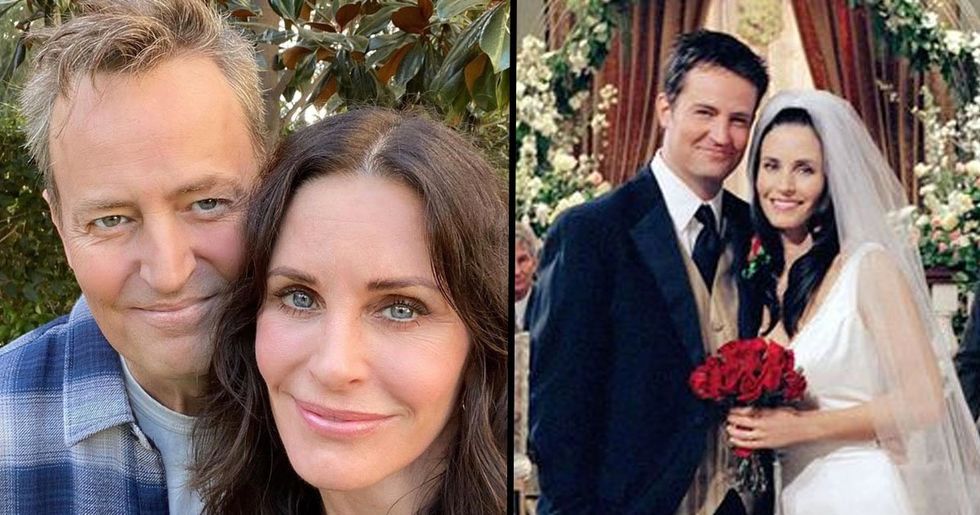 Matthew Perry Has ‘Always Been in Love With’ Courteney Cox

It seems that the last few months have brought us all kinds of Friends related news.

The show celebrated its twenty-fifth anniversary, Jennifer Aniston finally got an Instagram account, the gang posed for a cute reunion selfie, and there has been a lot of talk about the highly-anticipated Friends reunion.

But the most recent news is rather controversial, with sources claiming that Matthew Perry has "always been in love with" Courteney Cox.

Keep scrolling to find out whether Chandler and Monica's love story could actually be happening in real life...

And it has since gone on to become one of the most popular sitcoms of all time.

The world still cannot get enough of the gang...

Maybe because they're all so relatable for anybody in their mid-twenties? Or maybe because of their up and down relationships that we can all relate to.

Ross and Rachel were the most iconic couple.

Ross, played by David Schwimmer, and Rachel, played by Jennifer Aniston, were the on and off couple throughout the entirety of Friends, with them eventually rekindling their love on the very last episode.

They did have a baby together, after all...

But Ross and Rachel weren't the only dreamy couple of the series.

Fans absolutely loved the blossoming relationship between Monica and Chandler.

Monica, played by Courteney Cox, and Chandler, played by Matthew Perry, found love with one another in season 5 of the series, in an unexpected turn of events.

They were an unexpected match...

Monica was known for her squeaky-clean and (sometimes) controlling personality, whilst Chandler was the funny-man of the gang with his constant sarcastic one-liners.

They tied the knot in season 7, and they went on to adopt twin babies in the very last episode.

Monica and Chandler's love story was one of the major plot points of Friends.

Fans found it difficult to comprehend real life where Courteney and Matthew weren't an item.

But it turns out things may have been a little too accurate for some cast members.

A source told US Weekly that Matthew Perry was indeed in love with Courteney Cox throughout the majority of their time filming the sitcom together.

Could we be any more shocked?

The insider told the magazine, "Matthew’s always been in love with her."

Apparently, this love has been felt for years.

"Matthew has never fully been able to get over her," the source also said.

This isn't the first time that Courteney and Matthew have been rumored to be involved with one another...

This statement about Matthew's love for Courteney comes 4 years after it was claimed that the former co-stars were casually dating following Courteney's brief split from Johnny McDaid.

The pair have always been close...

A source told Perez Hilton at the time, "It's no surprise that Matthew was one of the first people Courteney called after Johnny left her. They've leaned on each other before."

She and Johnny reconnected in 2016, even though they haven't got engaged again after they called it off in 2015.

Matthew is believed to still be single...

But he has dated his fair share of fellow A-listers over the years.

He dated Baywatch star Yasmine Bleeth and actress Julia Roberts during the 1990s, and he was in a relationship Mean Girls star Lizzy Caplan for 6 years until their split in 2012.

But he and Courteney still remain very good friends...

Courteney recently took to Instagram to post a selfie with Matthew, captioning the post, "Guess who I had lunch with today... I KNOW!! Could I BE any happier? #realfriends."

Matthew's love declaration comes a day after a Friends reunion was strongly hinted...

The Hollywood Reporter revealed that talks are underway for a Friends reunion special that would bring back all 6 main cast members.

This is a pretty big deal...

Sources stress that no deals are in place at this time, but the fact that all of the cast members and creators are willing to come together again is a big step forward.

All us Friends fans can do is keep our fingers crossed!

Hopefully, an update on the gang and their antics will be coming to us very soon. To keep reading about the gang, keep scrolling to hear what Gunther had to say about Jennifer Aniston...