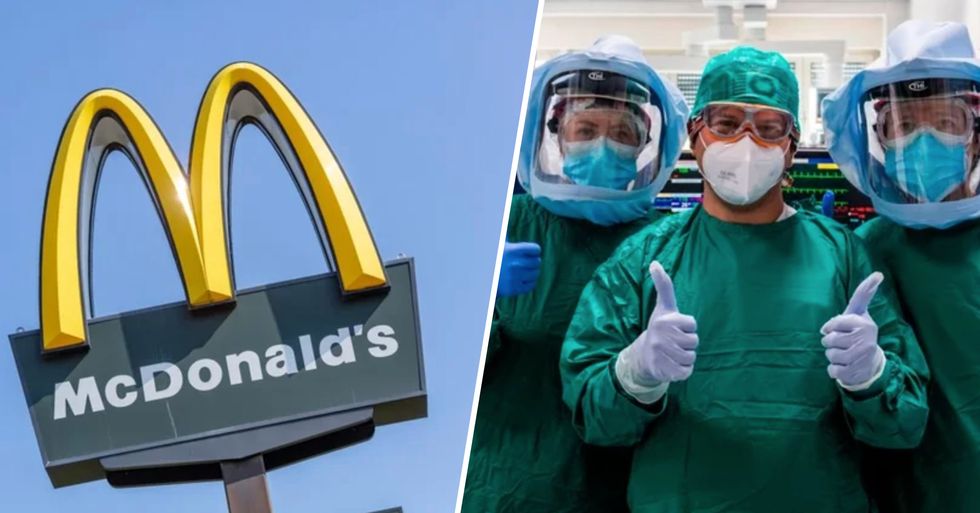 In an attempt to spread a little bit of fast-food love during these dark and difficult times, McDonald's has revealed that they will be doing something remarkable for all of our emergency workers. They will receive thank you meals!

More than ever before, our emergency workers need our help.

Amid the ongoing medical pandemic, our hospitals and police stations have been stretched to their limits.

First responders have all been working inhumane hours to keep up with the influx of patients and virus cases...

And, in doing so, have been putting their own lives at risk.

These people are literally putting themselves on the front line in the battle against the virus...

But the conditions in which they have been working have been appalling.

On top of the difficult hours...

And, more often than not...

They don’t even have sufficient protective gear, or at least, not enough of it to go around, such as effective hygiene masks.

So, as a result of these unjust conditions...

These emergency workers need our help and cooperation more than ever before.

Thankfully, people have been helping these workers the best they can.

The kindness of strangers really hasn't been going unnoticed during these difficult times, and various nurses and doctors have been taking to social media to share their gratitude.

There have been various symbols of gratitude from all over the world...

Including weekly rounds of applause across the United Kingdom.

And many businesses have been offering a helping hand in the best way...

Through food! This Denver bakery sent their local hospital a box of freshly-baked cupcakes, just to spread a little bit of cheer across the hard-working medical team.

And now, an even bigger company have decided to give a word of thanks...

Through the good, old fashioned cheeseburger.

McDonald's is the latest restaurant to extend a helping hand during the crisis...

By offering free food to all emergency workers and first responders across the country. It doesn't get much better than that, does it?

The fast-food restaurant has faced thousands of closures thanks to the ongoing pandemic.

Though it's restaurants haven't been closed here in the States, the fast-food chain has been forced to close franchises across several parts of the world, including the United Kingdom.

But this hasn't stopped them from giving a little back.

The company have today announced that they will be offering free "Thank You Meals" to healthcare workers, police officers, firefighters, and paramedics who are on the frontlines of the pandemic battle.

As a token of their appreciation...

The meals will be offered between the dates of April 22nd, and May 5th - All workers need to do is collect them through the Drive-Thru with evidence of occupation and a valid ID.

Thank You Meals will cover all meals throughout the day...

There will be a choice of an Egg McMuffin, Chicken McGriddles, or a Bacon, Egg, and Cheese Biscuit. All options come with any size soft drink, tea or coffee, and, of course, a Hash Brown.

As for lunch and dinner?

Workers will be offered choice of a Double Cheeseburger, 6-Piece Chicken McNuggets, or a Filet-O-Fish. All options come with any size soft drink, tea or coffee, and a side of small fries.

The meals will served in the iconic Happy Meal boxes... All in the hopes of bringing that extra bit of happiness to the lives of our emergency workers.

The President of the restaurant chain says the idea came from the valiant efforts of their own workers.

“We have been inspired by the way our franchises have been going above and beyond to support their local communities throughout this trying time," Joe Erlinger, President, McDonald’s USA said.

"That is truly our McDonald’s system at its best."

“I couldn’t be more proud of how our company, franchisees, and supplier partners have come together to give back to those who are working tirelessly for our country." For more information on the Thank You Meals, click here. But if you're hungry for McDonald's right now, keep scrolling to learn how you can make one of their iconic breakfast items at home...