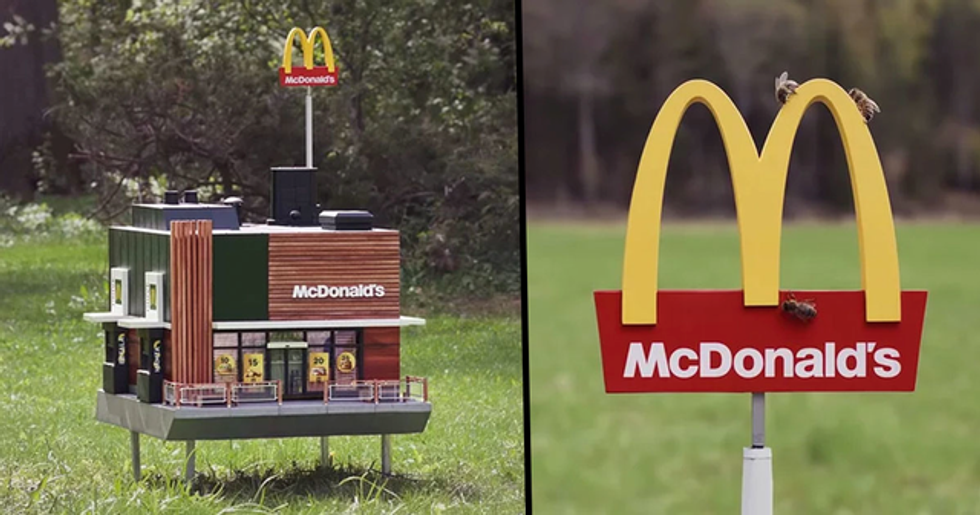 McDonald's is the tenth most recognizable brand in the world. Its golden arches can be seen at over 37,000 locations across 115 countries globally. In the lower forty-eight states in the USA, apart from one spot (in the plains of South Dakota), you are always less than one hundred miles away from your nearest McDonald's. Its golden arches are unmistakable, and wherever you are in the world, you know what to expect when you walk through the doors.

That size means that the company is in a position to cause great harm or do great good, and McDonald's has recently started to take an interest in the welfare of bees. Wait until you see what it has done.

There are over 20,000 species of bees. They range from 2mm to 4cm in length and can do incredible things.

For starters, their wings beat 11,400 times a minute. That's what makes the buzzing sound.

Honey bees are the most common kind and are incredibly interesting. These are the social, black and yellow striped bees that we hear about most often.

Their brains are the size of sesame seeds, but they are very smart.

Bees promote women in the workplace.

The honey bees have one Queen bee, who produces all the eggs.

The female bees do the work while the male "drone" bees do no work; their sole job is to mate.

Honey bees do a dance to attract each other, which is quite common in the animal kingdom. What is less common is their "waggle dance."

The waggle dance is performed by foraging honey bees. They use deliberate movements across the honeycomb which tells the other bees the direction and distance from the honeycomb to rich sources of pollen. How cool is that?

A honey bee tends to visit fifty to one hundred different flowers during one pollen-collection trip.

They don't just pollenate flowers, they are also vital for our agriculture.

Almonds and avocados depend entirely on bees for pollination and blueberries and cherries are 90% dependent. It is for this reason that there are claims that vegans shouldn't eat them.

Bees are exploited for their work.

There are about 2.7 million bee colonies in the USA and two-thirds of them are used to pollinate crops and to produce honey and beeswax. Bees' contribution to US agriculture actually accounts for a value of nearly $20 million.

Bees spend a lot of time travelling for work.

In order to pollinate the crops, bee colonies are transported to farms. This takes them away from their natural habitats and can severely impact their survival rates. But that's not the only thing affecting them.

Climate change is ruining everything.

The ice caps are melting.

As temperatures rise, the ice caps are melting, which is making sea levels rise. At the same time, other areas are becoming drier than they should be.

Extreme weather should be rare, not commonplace.

It is also causing extreme weather events, like hurricanes and floods. This is happening all over the world and can be seen in things like the heat waves in summer and the extremely cold winters.

Climate change is particularly dangerous for the vulnerable.

On a global scale, this means that it disproportionately affects less developed countries, despite the fact that it was the most developed countries that caused the majority of the damage. It also affects animals and various other living creatures, through no fault of their own. A report showed by the World Wildlife Foundation shows that from 1970 to 2014, humans caused a wipeout of 60% of mammals, birds, fish and reptiles.

Scientists are 95% sure that humans are the dominant cause of climate change. This means that, without humans on the planet, the Earth's atmosphere would be several degrees cooler and would continue to be a safe eco-climate for all living things. But humans have wrecked that.

Agriculture is a key cause of climate change.

Livestock such as cattle and sheep emit huge quantities of methane gas. It's like carbon dioxide, but the negative effect on the climate is twenty-three times worse. This means that the average amount of methane that a cow emits in one year is the same as driving 12,500 km a year. This distance is similar to driving from Seattle to Miami 3 times.

There's something worse than the methane emissions.

In the USA alone, cows create 500 million tons of manure, which, in turn, releases nitrous oxide. As it turns out, nitrous oxide is 300 times worse for the environment than carbon dioxide. So as you can see, the atmosphere doesn't stand a chance.

Deforestation is a big problem.

The other huge impact of farming is on the land itself. Rearing livestock requires huge amounts of land. Deforestation is taking place at a rapid rate in order to feed us meat and, at the same time, the livestock needs to be fed, which takes up further land. In order to have land for the livestock and its food, habitats of hundreds of other species are being destroyed. Plus, they pollute local waterways and reduce soil fertility.

Who is the biggest farmer of all?

McDonald's sell seventy-five hamburgers every second. In Canada alone, this equates to 190,000 lbs of beef every day. In America, people consume one billion pounds of beef in a year. Can you imagine how much methane and nitrous oxide is released as a result of this? Plus how much land is required to produce so much food...

McDonald's is the biggest fast food chain in the world.

The amount of food that McDonald's produces is not in line with the amount of people it feeds. Although they serve sixty-two million people daily, they waste huge amounts of food so that they can serve people quickly. On top of that, there is the health issue...

Fast food is not a sustainable meal plan.

McDonald's meals are not nutritious. They do not provide full meals that keep people full. As a result, people often have McDonald's as a snack. But that's not the only problem with McDonald's food.

McDonald's spend around $2 billion every year on advertising.

Aside from the fact that this is a colossal amount of money that could be put towards good causes, it's also terrible that they're spending that much money on trying to encourage people to buy junk food. Burgers and fries are not the way to obtain a healthy lifestyle. People need to be taught how cheap and easy it can be too cook healthily. The golden arches don't house everything we need food-wise.

That's not the only harm that McDonald's causes.

McDonald's used 1.8 million plastic straws a year before their recent switch to cardboard straws. They also have plastic toys, plastic cutlery, plastic ketchup sachets, plastic drinks lids... the list goes on. The amount of harm that McDonald's is causing to the environment is staggering. But now they are trying to mask the amount of harm they are causing.

McDonald's have now opened for bees.

McDonald's have created tiny restaurants for bees. They have drive-thru windows, outdoor seating, the signature "golden-arches," and, of course, more advertising in the windows. So now McDonald's can apparently meet all of the bees needs too.

What's the deal with these tiny restaurants?

Some McDonald's in Sweden have decided to try to host beehives on the roofs of their restaurants. Rather than just putting beehives up there, they have turned them into mini restaurants known as McHives.

The idea doesn't stop at beehives.

In order to try to encourage the bees to come to the McHives, McDonald's are trying to replant flowers and plants in the land surrounding McDonald's restaurants, rather than just having grass. Maybe they could do that with the asphalt too…

It could have a really cool impact.

If this Swedish initiative takes off, it could start to have a great impact on the world's bees. There are 37,000 McDonald's stores around the world; that's a lot of beehives that they would be introducing into the world.

Should bees be used as a marketing campaign?

Bees are an essential part of the natural world. As we saw earlier, they help to pollinate a lot of important food groups and it appears that they are now being turned into part of a marketing technique of the world's biggest fast-food chain. But McDonald's are a direct cause of a lot of the problems that bees face and by turning beehives into McDonald's restaurants, it seems like they are trying to minimize the amount of damage that they are doing regardless of their intention.

It's great that McDonald's is finally trying to do something positive for the world.

Everyone should try to make a positive impact on the world. We should all do everything that we can. So from that point of view, it's great that McDonald's are doing something positive, finally. And this could increase the number of homes for bees by quite a lot. However, we shouldn't let this tiny action by a massive corporate company hide the fact that they are causing immense amounts of damage to the Earth, as well as to the human body.

McHives may be the height of hypocrisy...

What they are doing is a drop in the ocean compared to what they could achieve, but they're doing their bit and we have to support that.