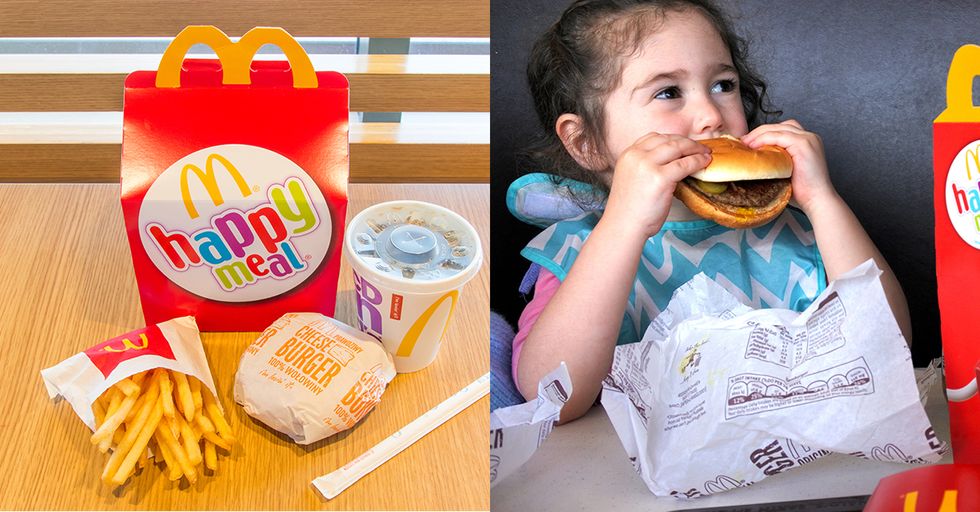 Many fast food chains have fooled their customers once or twice in order to profit for the sake of their business.

From lawsuits to money-pinching tricks, it's not hard to find immoral fast food practices; you have to look out for them. And with the more information you have, the easier it'll be to spot them!

Read on, as we explore the new McDonald's Happy Meal blunder and many other fast food incidents from over the years.

McDonald's has parents double-checking their receipts.

If your bill looks a little heftier, it's not your imagination. It's not the first time a fast-food chain has pulled something sneaky, over the eyes of their beloved customers. But, McDonald's isn't the only one to play tricks on their customers.

Value Happy Meals are a thing of the past.

Have you noticed your regular McDonald’s order is more expensive than usual?

That’s because—with no notice or fanfare—McDonald’s removed Happy Meals from its $1, $2, and $3 value menu.

How much more does it cost?

On average, a Happy Meal costs about 25 percent more than it used to!

You might be able to find a Happy Meal in the value section.

After all, McDonald’s employs a policy stating that individual locations can set their own standards. So, it’s possible there might be a location with the kids’ meal on its value menu.

The value menu is still pretty new for McDonald’s.

Parents may be upset about the change in price.

Although, comparatively, it’s surprising the Happy Meal dropped in price in the first place.

Their inclusion on the value menu was the first time that Happy Meals were ever part of a nationwide deal menu at all? They’ve never been universally discounted like that before.

In fact, Happy Meals have been changing a lot lately.

In February, McDonald’s announced that it was removing cheeseburgers from Happy Meals altogether.

The change was made for the better.

Cheeseburgers were axed from Happy Meals to reduce overall calories, saturated fat, and sodium in the meals.

Of course, you can still get a hamburger.

None of those options are $3.

Bummer! Nevertheless, many fast food chains have come up with sneaky ways to make money from customers.

While we’re on the subject of McDonald's, there was a bit of McRib controversy.

The controversy revolved around the fact that the McRibs were not made from rib meat. One Redditor with a friend on the inside posted the above picture of a McRib patty, before being cooked.

McDonald's finally released an ingredient list for the McRib in 2014—and it’s actually ground pork. Turns out, a ‘McRib’ is all in the shaping.

One Burger King employee spilled the beans on its decaf coffee.

The decaf at Burger King isn't actually decaf. It's just the regular coffee, but watered down. -ComicBookFanatic97

And a Subway employee dished on the company’s Mayo policy.

If you’re ordering full-fat Mayo, you may not want to bother. Former Subway employee. We put light Mayonnaise in both bottles because it's cheaper than normal mayonnaise. -Caps4lifeov8

The company was served a lawsuit, alleging that their seasoned meat was only 35% beef. That percentage was not entirely true, but it also wasn’t 100% beef.

So Taco Bell released the details.

As it turns out, Taco Bell's seasoned meat is only 88% beef. The other 12% is fillers, seasonings, emulsifiers, and thickeners.

So, it’s up to you if that difference stops you from getting tacos there anymore! 88% beef is sticking around.

What you see isn’t what you get.

Have you ever noticed your fast food orders don’t look like the pictures on the menus, or in advertisements? In ads, the food is crafted perfectly, with the ripest, freshest ingredients, and specially arranged to look good. But they don’t do that with everyday orders.

And that’s not about to change.

You might call it false advertising, but the FTC hasn’t touched any cases stating that food ads are deceptive. So, if you’re a fast-food consumer, make sure your expectations are adjusted accordingly.

This former Subway employee told a cringe-worthy story on Reddit:

I used to work at Subway. My manager at the time was really conscious of food costs...to a fault. Most commonly was changing the expiration dates of food so it wouldn't have to be thrown out. This may not be a huge deal for a couple days, but food would last a couple WEEKS. He would also take lettuce in a pan and put it back into the bag. Finally, he kept frozen (unbaked) bread for over a year. It was so old that the yeast had died, causing the bread to not rise. He was fired after I got fed up and blew the whistle to the franchise owner. -swifteh

McDonald’s faced a lawsuit over the Quarter Pounder with cheese.

A while back, there were Quarter Pounder options on the menu: one with cheese and one without. The option with cheese cost more. And after a while, McDonald’s removed with a sans-cheese option. So now, the only way to get a Quarter Pounder without cheese is to order it—and still pay the extra 30 cents for cheese you don't want to eat.

So someone sued the fast food chain.

The lawsuit claimed that "customers have been forced, and continue to be overcharged for these products, by being forced to pay for two slices of cheese, which they do not want, order, or receive, to be able to purchase their desired product."

McDonald’s stated that the overcharge was to keep customers happy.

"The advertised Quarter Pounder burger comes with cheese. We try to accommodate our customers' requests by allowing them to customize their orders, such as a Quarter Pounder with no cheese," the company told USA Today.

Why would a powerful chain like that need the money?

You’d think McDonald's would accept losing that 30 cents, instead of forcing its customers to pay.

Those fast food ads claiming the food is fresh may not be accurate.

I worked at a Tim Horton's all through high school and a bit of University. The "Always Fresh" stuff is kind of BS. Everything is frozen and reheated when they need to be served. The doughnuts, the eggs in the breakfast sandwich, and any baked good was all frozen, put in the oven and then served. My location, however, was strict about the "20-minute" rule on our pots of coffee. -NutmegInTheLibrary

Same goes for Panera, though it’s not all negative.

Worked at Panera for four years. Lastly, not a dirty secret but something positive, any leftover bread and pastries were donated at the end of the night to local food banks, soup kitchens or churches. -Wolleyball

Some fast food places use smells to make you think you’re hungry.

It’s no coincidence that the smell of cinnamon and sugar gets heavy when you walk past a Cinnabon in the mall.

In 2016, diners noticed they felt a little too full after eating a chorizo burrito at Chipotle that was advertised to have 300 calories.

As it turns out, the 300 calories referred to the chorizo alone.

A former McDonald’s employee claimed that the chain purposely skimps on fries.

I worked at McDonald's and they taught me how to pinch the fry carton just right while putting the fries into them so that it looked full, but actually wasn't. I only had 1 customer call me out on it. He shook the fries out into his bag and poured them back into the fry carton himself and it only filled up half way, so I had to give him more fries. I was impressed and embarrassed. It's been 7 years and I can still see his face. -Anonymous McDonald’s has since reached out to the Huffington Post and denied that this was a practice at any location, so we may never know whether this was an isolated incident or a cover-up!