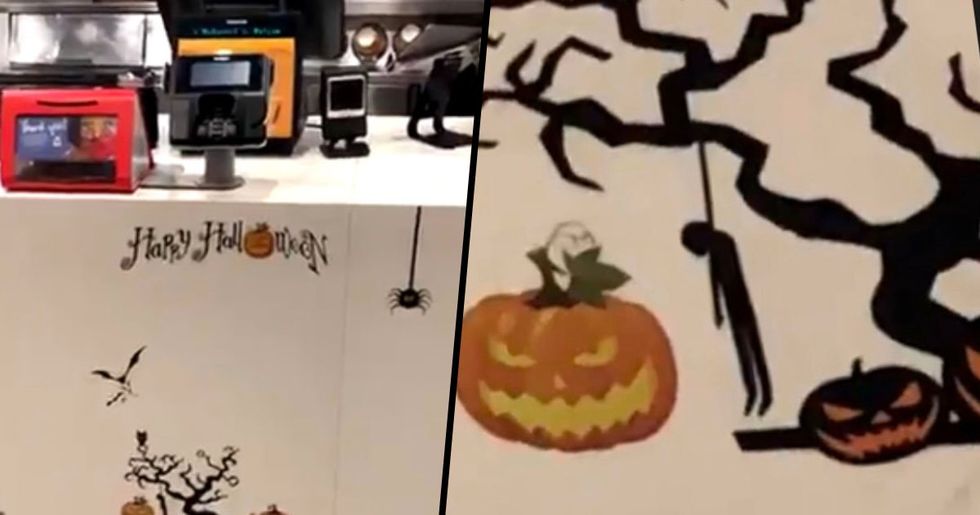 Halloween is a mere twenty-four hours away, and it's safe to say that the entire world has truly gotten into the spooky spirit.

There are some pretty incredible Halloween costumes and decorations to be seen, but every year without fail, there's always someone who takes it a bit too far, and it seems that McDonald's is this year's culprit.

The fast-food chain has been slammed for one of their restaurants in Massachusetts displaying a Halloween decoration that displayed a person being hung, or "being lynched."

Halloween has been a tradition for centuries now...

It is believed that the tradition originated with the ancient Celtic festival of Samhain when people would light bonfires and wear costumes to ward off ghosts.

Halloween has evolved drastically over the years.

It is now associated with a day of dressing up in fancy-dress, eating candy, trick or treating, and cladding our homes and places of work with spooky decorations.

It has become one of the most fun and loved holidays of the year...

But a lot of people take Halloween as an opportunity to dress up in costumes, and sadly, not all of these creative outfits relate to the spooky season.

Many like to dress up purely for the shock factor.

Particularly here in America, dressing up at Halloween doesn't have to be scary and a lot of people take pleasure from finding the most outrageous outfits out there.

President Trump is a popular choice...

People around the world enjoy mocking the president by dressing up as him for Halloween.

But many outfits have been deemed extremely offensive in the past...

Examples include individuals dressing up as figures such as Adolf Hitler, ISIS soldiers, refugees - even Kim Kardashian being tied up and held at gunpoint after her mugging in Paris became a fancy dress costume.

Halloween is about celebrating an ancient tradition...

And not about trying to be the most offensive.

But because of Halloween's spooky and sinister nature...

There will always be something about Halloween that will offend people, and cause upset.

McDonald's has been called out this year for their choice of Halloween decor...

Erik Pocock was at the fast-food chain in North Andover, Massachusetts on Tuesday ordering food when he looked down and noticed something was “not right" about the Halloween decorations.

The drawing featured a haunted tree, pumpkins, spiders, and what appears to be a human body hanging from the branch.

At first, the customer thought the artwork was "cool." “It looked like a typical Halloween decoration. It said ‘Happy Halloween.’ It had some spider webs and some spiders and, like, a haunted tree and I was like: ‘Oh, that’s cute’," he told WCVB.

There was something very sinister about the artwork...

“Then, you look closer and that’s not cute. That’s not right." Pocock realized that the image showed the outline of a person hanging in a scene that looked “more like a lynching."

Lynching is associated with racism...

From 1882-1968, 4,743 lynchings occurred in the United States.  Of these people that were lynched 3,446 were black. Our country has come in leaps and bounds since, so anything that may appear to outline this terrible part of history is not accepted.

The customer felt that the choice of artwork was unacceptable.

“Any hatred towards any race or any person is just extremely unacceptable, especially for a large establishment like McDonald’s," Pocock went on to say to  7 News Boston.

The artwork was posted online and quickly went viral.

Others expressed their shock over the placement of the decal, which is at the eye level of most children.

With the majority slamming the news channels as well as the fast-food chain for not declaring the artwork as racist and offensive.

But not everyone was offended by the decoration...

“There are much bigger issues than this Halloween decoration representing death. SMH," one Twitter user wrote.

Many are struggling to see the insensitivity of the artwork...

"Omg the stupidity continues. I swear there is no cure for this madness. These type of people who get offended are the poison of society. I've seen similar images all my life with these types of Halloween decorations and it has nothing insensitive about it," another wrote.

McDonald's has decided to address the issue.

The McDonald’s restaurant owner and operator Chuck Lietz has since apologized and removed the image, saying they “deeply regret that these decorations were on display."

The display has since been removed...

"As soon as we identified the inappropriate content, we immediately removed the decorations display," he told 7 News Boston in a statement.

The creators of the artwork clearly didn't think their work was offensive...

“Creating an environment that is welcoming and inclusive to all our guests and employees is critically important to us, and we apologize for any unintended offense they may have had on our community," he went on to say.