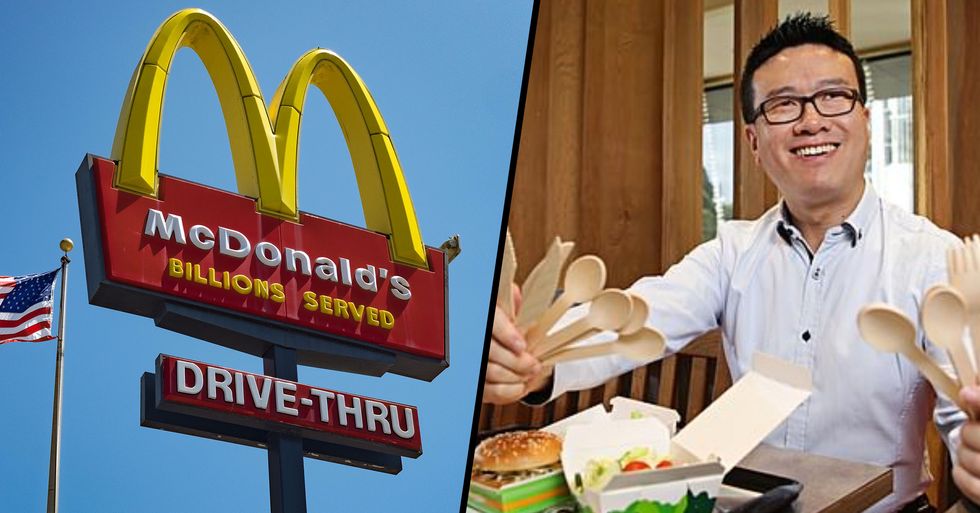 McDonald's Will Axe Plastic Cutlery and Replace It With Wooden Alternatives

It's no secret that plastic is truly damaging our planet.

We humans use plastic on a day-to-day basis and it is this excessive use that is the problem.

But now, McDonald's - the biggest fast-food chain in the world - has announced they will be axing plastic cutlery and replacing it with wooden alternatives.

We should all, by now, be aware of the devastating effects plastic has on our planet.

The material, which is not biodegradable or recyclable, has been clogging up our oceans, littering our environments, and suffocating our animals for decades.

Our use of plastic has spiralled out of control...

About one trillion single-use plastic bags are used annually across the globe, and more than half a billion plastic straws are used every day.

But the biggest culprit?

More than sixty million plastic bottles end up in landfills every year...

And the ones that avoid this fate end up on our beaches and in our oceans.

But efforts to clear up our planet of this plastic waste are higher than ever before.

In recent years, more and more people have been taking to beaches and other damaged areas to rid the ground and the oceans of single-use plastic waste.

And the use of reusable alternatives to plastic are on the rise...

More people are cutting down on their plastic use by investing in environmentally-friendly alternatives, such as reusable water bottles and coffee cups.

But despite all the good these volunteers do, there are still people out there who seemingly don't care about saving our planet.

And many simply discard this plastic into general waste bins instead of recycling.

Fast-food restaurants are big culprits of this...

As well as using plastic bottles and straws, many fast-food chains provide plastic cutlery for customers.

The environmental impact of plastic cutlery is shocking...

It contributes to the pollution of waterways, heightens the carbon footprint, endangers wildlife, damages air pollution, and it can even be harmful to our health.

But it is much easier said than done to cut down on the plastic cutlery...

Millions of companies and businesses in the hospitality industries around the world save a tonne of money by using plastic cutlery... but at what price will it cost to save our planet?

It seems that finally, change is happening...

And that's all thanks to the one and only McDonald's.

Mcdonald's Australia have announced today that they plan on banning plastic cutlery...

The Australian branches plan to phase out plastic completely by the end of 2020...

This is in a bid to reduce landfill waste, which is what many countries around the world are tackling at the moment.

McDonald's wants to use its global popularity to make a difference...

Kylie Freeland, McDonald’s Australia supply chain and sustainability director, released a statement about the move, saying, "We’re committed to being an industry leader in sustainable practices, ultimately using our scale for good to positively impact challenges facing the communities we operate in."

Removing the plastic from the restaurants will make a huge difference...

"By removing plastic straws and cutlery from McDonald’s restaurants, we are continuing to reduce our environmental footprint and will be removing more than 860 tonnes of plastic from our system," she went on to say.

This announcement comes after McDonald’s conducted a 3-month trial with wooden cutlery in 9 outlets across New Zealand last year.

This is a step in the right direction for Australia...

As per the New Zealand Herald, the Boomerang Alliance and the World Wide Fund Australia said plastic enters Australian oceans at a rate of 130,000 tonnes a year, and with plastic recycling rates only reaching nine percent, they stated federal and state governments must intervene where the market has failed.

It is now only a waiting game for the same ban to be implemented here in the States...

And we can only cross our fingers for this much-needed change to happen very soon. Keep scrolling to learn the amazing method that Italian bars have been using to prevent wasting plastic...