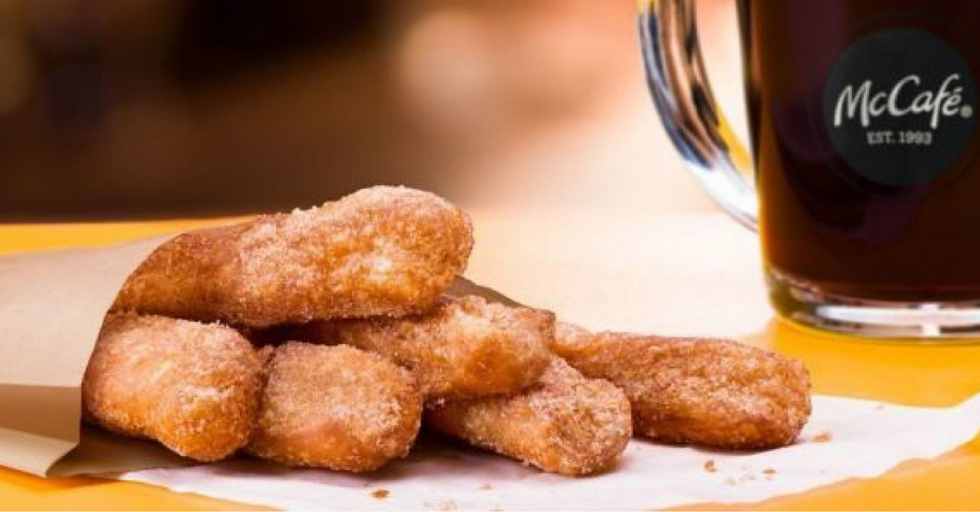 It's time to come clean about your fast food obsession – we all know McDonald's is your favorite. It's okay to admit it! Even if you don't eat it often, you can't pretend that their french fries are not little potato slices of heaven. Don't even get me started on their McFlurries. It's basically joy served with a spoon.

Breakfast time at McDonald's has always been a classic, with those delicious McGriddles and Hot Cakes covered in their golden syrup. But recently, people have been sleeping on their hash browns and other famous breakfast options. So McDonald's has found a solution and it involves two of my favorite things: a deep fryer and lots of sugar.

Donut sticks are the newest addition to their breakfast menu, and it's causing some buzz online. McDonald's is hoping to draw attention back to the breakfast menu and remind everyone that in fact, they are more than their Big Macs and french fries.

McDonald's is the original fast food love for so many people. The options are endless and since they are basically on every street corner in every city, it's hard to avoid their presence.

I would do just about anything for their fries.

I know I'm not the only one who thinks their fries are the absolute best. That's what always keeps me coming back to the golden arch.

McDonald's cravings can hit you at any moment.

It's not like we eat it all the time, but sometimes, it just sounds like heaven. The best part is you never have to go too far to get your cravings satisfied.

McDonald's is not afraid to take some risks.

Of course, there are the menu classics that will never leave, like the McNuggets and the Big Mac, but every now and then, they love to mix it up.

Every spring, McDonald's rolls out their mint shakes to celebrate St. Patrick's Day and the people go crazy for it. Who would have thought that a bright green milkshake would have people drooling?

Which is back by the way!

If you dig the green shake, McDonald's is happy to share that it's back and can be found at participating restaurants. You can even download an app to find one near you!

How could we forget the infamous McRib?

People go wild for the McRib because it's appearance is always sporadic and long awaited. Not every McDonald's serves this specialty so people will travel far and wide to get their hands on a McRib.

Did you know they have cheesy bacon fries?

It was a pretty big deal and the internet was going crazy for them. The announcement definitely brought some more hungry visitors back to the golden arch to try something new.

So what's next for the menu?

McDonald's has noticed that their breakfast attendance has been slacking lately and they decided they needed to shake it up a bit.

Breakfast was getting ghosted.

Considering almost every new item they've rolled out has been lunch or dessert treats, they knew that the breakfast menu needed some sprucing up.

McDonald's changed their breakfast menu availability so that customers could order breakfast all day, but that still wasn't enough for sales to stay up.

All they needed was a little bit of sugar.

The golden arch teams put their heads together to come up with a genius idea to give the breakfast menu the sweetness it had been missing.

You heard me! Donut sticks! McDonald's just stepped their game up and I am all for it.

We couldn't believe it either.

Shook is an understatement. We never saw this coming.

Get ready for a sweet breakfast.

These deep-fried donut sticks are sprinkled with cinnamon and sugar and could possibly be your new favorite breakfast item.

If this allows me to eat churros for breakfast, I am very okay with that. Donuts are basically dessert anyways but I don't make the rules for breakfast foods!

But I can't ignore the fact that they don't even look like donuts.

Maybe churros or french toast sticks, but calling them donuts seems kind of random. I guess fried dough is basically all a donut is, so therefore, it is a donut?

There were some questions.

You never know how long these promotions will last and McDonald's has made it clear that these donut sticks really are for a limited time and will only be served at breakfast.

Some people seemed excited at the idea of trying the Donut Sticks.

I mean, it's deep fried dough covered in cinnamon and sugar, how could you go wrong?

Is this too good to be true? I mean, this is a lot of sugar for breakfast, but what else can you expect from a new McDonald's menu item?

Some were furiously excited.

@wxyzdetroit WHY! WHY! WHY! I just want to be left alone, NOT constantly reminded of just how delicious you and you… https://t.co/Te29HGwHqG
— iammarcjones (@iammarcjones)1549943719.0

This guy is really worked up about the news. He just can't seem to escape McDonald's and all their tasty treats. We get it! It's hard to ignore their influence.

It got one chef excited!

A simple yesssss from a chef says a lot.

Others weren't looking forward to the imminent weight gain.

Donut sticks to beef up their breakfast menu?? The only thing they will beef up is belly fat. #DonutSticks… https://t.co/duu9x4Fxh5
— Eugene Gluecough (@Eugene Gluecough)1550070557.0

I feel like I gained weight just looking at this picture. Will that stop me from trying them? Absolutely not.

You can get six donut sticks for $1.29 or double your amount for $2.39. Basically, for the change in your wallet, you can be filled with sugary goodness.

It pairs great with a cup of joe.

Since the donut sticks are only served at breakfast time, McDonald's is doing a deal where you can get six donut sticks and a cup of coffee for $1.99. That's not a bad way to start the day!

The hope is to bring back breakfast loyalty.

Their CFO, Kevin Ozan, made an announcement in January that they want to draw more customers in for breakfast because they've recently seen a drop in morning sales.

In November of 2018, they added their first new breakfast item in over 15 years. The Triple Breakfast Stack was basically a whole lot more meat added to their original breakfast sandwiches. Some people loved it, but it ultimately didn't bring back enough people to boost their sales the way they wanted to.

Keep an eye on their McBakery menu!

In the same announcement about the Donut Sticks, McDonald's mentioned that they are also going to be adding Muffin Toppers and Coffee Cakes in certain locations. This is the good news we all needed.

Who else is seriously craving these donuts right now?

All they had to say was donut and I was already convinced. They know the way to my heart.

Once again, McDonald's is sweeping me off my feet and it's okay if you feel the same way. Go get yourself some Donut Sticks and share the good news with your fellow foodie friends!