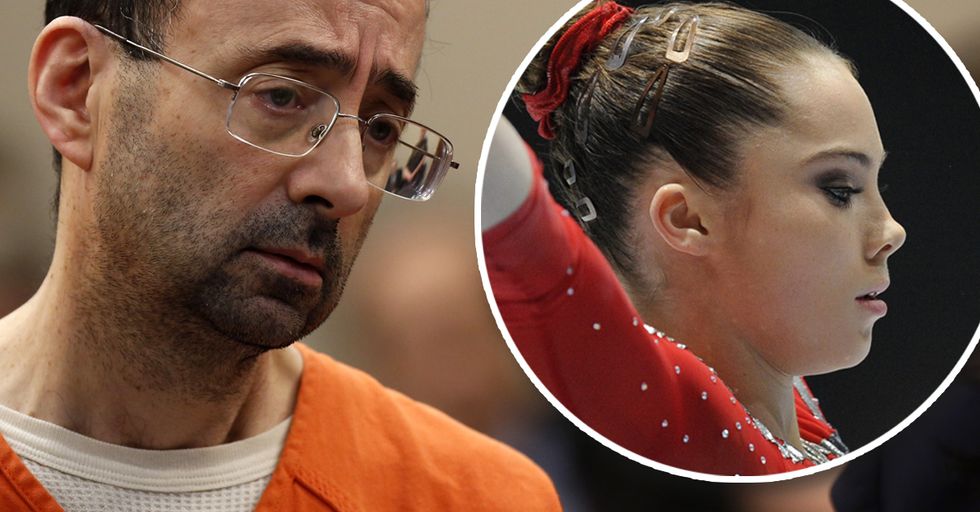 In 1994, Jane JD Doe was a gymnast competing with the U.S. national team when she got injured. She was sent to Larry Nasser, a doctor famous for his work with gymnasts. In fact, Nasser was widely considered one of the top in his field, which was why Jane JD Doe was surprised when he made inappropriate sexual comments and moved to "intravaginal adjustments."

If you've never heard of intravaginal adjustments, the first thing you should know is that it is a legitimate and common medical treatment for a variety of "musculoskeletal complaints." This is according to Casie Danenhauer, a former gymnast and current Doctor of Physical Therapy.

Via her blog Enlighten Phsyical Therapy, Danenhauer explains that such treatments require very stringent consent processes before they are administered – particularly if they are being administered to a minor (which, in most cases they shouldn't be). She states–

An internal exam would never be indicated as first line treatment for a minor with hip or back pain, much less performed on someone who has never seen a gynecologist or been sexually active, and much much less done so without the consent of the patient and the patient’s parent. Informed consent includes a full explanation of the treatment, the risks and benefits, and all parties (including parents for minors) agreeing to said treatment. [The] therapist [should] explain what she or he was doing at every moment of the physical exam which would be performed on an exam table, she or he would have a chaperone in the room, and she or he would be wearing gloves for the duration of the treatment.

Jane JD Doe, by the way, was a bronze medalist in the 2000 Olympics. But then, so are many of the women Nasser abused. In recent weeks and months, many elite athletes including Simone Biles, Aly Raisman, and Gabby Douglas have accused Nasser of sexual abuse.

Former USA Gymnastics doctor Larry Nassar is now accused of abusing more than 140 women including members of the Fi… https://t.co/dxrN8Hu2ER
— Athletes In Action (@Athletes In Action)1516208403.0

The doctor, who has already been convicted of child pornography, now has to face his accusers in court, and one of the most unexpected, but poignant testimonies came from Olympic medalist McKayla Maroney.

Maroney, who'd signed an NDA as part of a settlement agreement with USA Gymnastics, which had employed Nasser for years, was barred from speaking out about what Nassar did to her unless she was subpoenaed, or she would face a $100,000 fine.

After actresses Chrissy Teigen and Kristen Bell offered to pay Maroney's fine, USA Gymnastics revoked the fine via a statement which said.

USA Gymnastics encourages McKayla and anyone who has been abused to speak out. USA Gymnastics remains focused on our highest priority -– the safety, health and well-being of our athletes and creating a culture that empowers and supports them

The entire principle of this should be fought - an NDA to stay quiet about this serial monster with over 140 accuse… https://t.co/xRX90fndA5
— chrissy teigen (@chrissy teigen)1516119355.0

In a victim impact statement read aloud on Thursday, Maroney, who Nassar raped repeatedly from she was 15 until her retirement from gymnastics – a period during which her unimpressed frown at the 2012 London Olympics went viral – had this to say.

Larry Nassar deserves to spend the rest of his life in prison. Not only because of what he did to me, my teammates and so many other little girls – He needs to be behind bars so he will never prey upon another child. I urge you to impose the maximum sentence upon him.

I had a dream to go to the Olympics, and the things that I had to endure to get there, were unnecessary, and disgusting. I was deeply saddened by the stories of my fellow Olympic teammates that suffered as I did at the hands of Larry Nassar. More than 140 women and girls had to say, “#MeToo" to Nassar’s sexual assaults and hundreds more were victimized to create the pornographic images that fueled his evil desires.

"He abused my trust, he abused my body and he left scars on my psyche that may never go away," Maroney further wrote. But he wasn't the only one she blamed. She also laid the blame at the feet of three major institutions - Michigan State University, USA Gymnastics and the United States Olympic Committee.

A simple fact is this. If Michigan State University, USA Gymnastics and the US Olympic Committee had paid attention to any of the red flags in Larry Nassar’s behavior I never would have met him, I never would have been “treated" by him, and I never would have been abused by him... It is time to hold the leadership of Michigan State University, USA Gymnastics and the United States Olympic Committee accountable for allowing, and in some cases enabling, his crimes. Our silence has given the wrong people power for too long, and it’s time to take our power back.