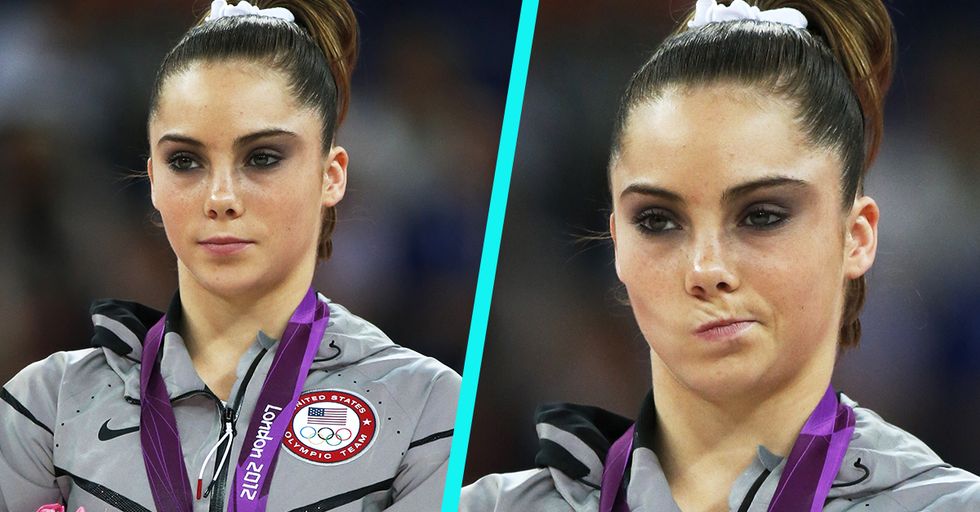 Twenty-two year old McKayla Maroney is known for a lot of things. She's an Olympic gold-medal-winning gymnast. She also rocks a patented smirk that became an Internet sensation during the 2012 summer Olympics, when she was part of the women's team known as the "Fierce Five." Seriously, there's entire Tumblrs dedicated to the "McKayla is not impressed" movement. She's an all around badass.

Maroney recently revealed that she was paid by the USA Gymnastics to keep quiet about her sexual assault.

Yes, it's as horrifying as it sounds.

Maroney alleges that the organization paid her to keep her mouth shut about the fact that she was sexually abused by the team's doctor, Larry Nassar. "Absolutely disgusting" doesn't quite capture it.

Just in case anybody is unclear, Nassar admitted to sexually abusing underage girls.

According to CNN, USA Gymnastics apparently became aware of the lawsuit from the media. They insist that "the concept of confidentiality was initiated by McKayla's attorney, not USA Gymnastics."

The organization claims that Maroney's lawyer at the time discussed the possibility of a confidential legal process.

USA Gymnastics released a statement saying: "Although USA Gymnastics is disappointed by today's filing, we applaud McKayla and others who speak up against abusive behavior -- including the despicable acts of Larry Nassar." Maroney's attorney had no comment on the statement.

Here's where things get shady.

Maroney isn't the only one that filed accusations against Nassar. CNN reports that none of the other athletes were asked to sign confidential settlement agreements, according to Maroney's team.

"In December of 2016, after suffering for years from psychological trauma of her sexual abuse at the hands of Nassar, and in need of funds to pay for psychological treatment," Maroney had no choice but to enter into a confidential agreement with USA Gymnastics, the lawsuit explained. Maroney's attorney described the confidentiality agreement as an "an immoral and illegal attempt to silence a victim of child sexual abuse." In two words: absolutely horrible...

It's 100% illegal to force someone to sign any sort of document that will force them to be quiet in regards to child abuse.

"The US Olympic Committee and USA Gymnastics were well aware that the victim of child sexual abuse in California cannot be forced to sign a nondisclosure agreement as a condition of a settlement," Maroney's attorney explained. "Such agreements are illegal for very good reasons -- they silence victims and allow perpetrators to continue committing their crimes. That is exactly what happened in this case."

Like we previously stated, Maroney isn't the first person to accuse Nassar of sexual abuse.

Literally dozens of women have come forward regarding the 54-year-old. The lawsuit says that Maroney "was forced to agree to a non-disparagement clause and confidentiality provision". It's part of the settlement that held "a six-figure liquidated damages clause over the head of McKayla Maroney and her parents." Ummm, what?

It keeps getting worse.

Maroney has come forward with allegations that Nassar has been molesting her since she was just thirteen years old. Inspired by the #metoo hashtag, Maroney wrote on her Twitter about the abuse. She explained that he would call it "medically necessary treatment."

"It seemed whenever and wherever this man could find the chance, I was 'treated.' It happened in London before my team and I won the gold medal, and it happened before I won my silver," she tweeted. At the time, USA Gymnastics released a statement that is quite contradictory to the lawsuit filed by Maroney. The statement explained that it "admires the courage of those, like McKayla Maroney, who have come forward to share their personal experiences with sexual abuse."

But Maroney and her team remain firm in her lawsuit.

The lawsuit says that the USAG forced the confidentiality provision onto Maroney so that they could "further conceal and shield from public scrutiny, outside investigation, and law enforcement, the true nature of Nassar's horrific sexual abuse of minors." Nassar was sentenced to 60 years in federal prison for child pornography and he also pled guilty to seven counts of first-degree criminal sexual conduct. Maroney filed the suit to obtain funds so she could pay for "life-saving psychological treatment and care." Let's hope she gets them. McKayla, we are impressed with you.