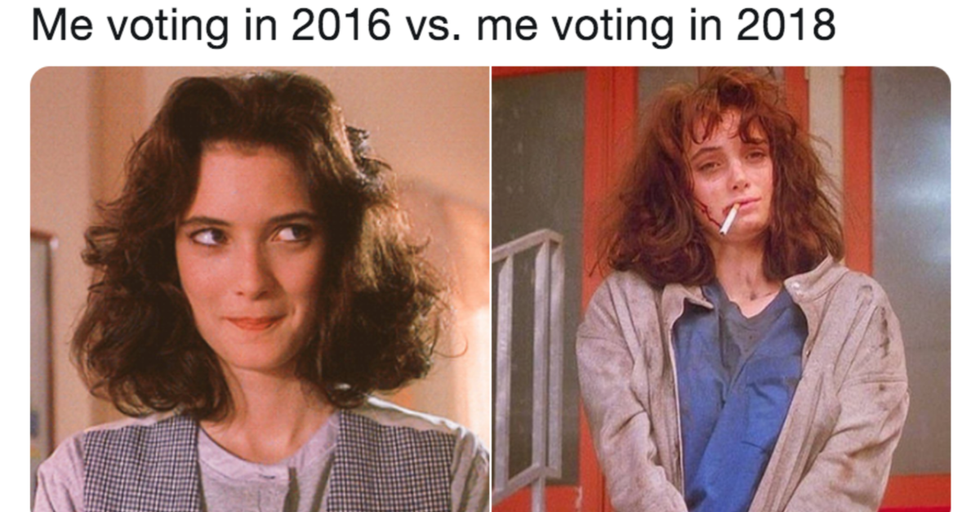 Do you have a plan to vote today? If you are eligible, please vote! It is an amazing privilege, and we are also fighting to save our democracy. That's some big stuff right there.

As you may have noticed, the political climate is a bit different today than it was two years ago. In November of 2016, we were bright-eyed and bushy-tailed as we headed to the polls to vote for our bright future. But things did not go quite according to plan, and since that day, divisiveness, hate, and violence have been increasing exponentially every single day.

Needless to say, we are exhausted, and we are angry. But now, in 2018, we have a chance to use our right to vote to make a positive change. All hope is not lost, as so many people are heading to the polls today, determined to save our democracy. We might look less like the bright-eyed baby deer in 2016 and more like Bambi after his mother died, but we'll be there.

And with that, our hilarious memes will be there too.

Game of Thrones' character, Sansa Stark might be the most badass character on the show. She has faced untold trauma (just like we have since 2016), but she's still going. We are all Sansa Stark today.

You know, I hadn't seen the resemblance before, but now it's clear: Gritty is Prince Harry after going through an ordeal.

Sabrina used to be a fun-loving, happy-go-lucky teenage witch! But the new Sabrina show is so dark, I can't see what's happening on the screen.

If there are any memes that I love and relate to, it's memes involving dogs. This one makes a lot of sense to me.

To be honest, some of us were as burdened and worried in 2016 as we are today. It's okay, Ben Affleck will make it through, and so will we.

If you don't look like Gollum right now, clutching your ballot and hissing, "My precious," then congratulations. You are in the minority.

The transformation of Winona Ryder's character in Heathers is the perfect representation of how I feel in 2018.

Usually, Charlize Theron is one of the most glamorous, poised, and put-together person in the world. But then there was Mad Max: Fury Road, and we all realized that Charlize Theron is amazing, and we're already living in the apocalypse.

That cherry photo of Leo walking down the street is already a meme, and now it's seeing a second life because it's so true!

Uh, yeah. This is perfect because in 2016 we were about to break the glass ceiling, just like Peggy in Mad Men, but now we are pretty much living in The Handmaid's Tale. Share this with someone to get them to vote!