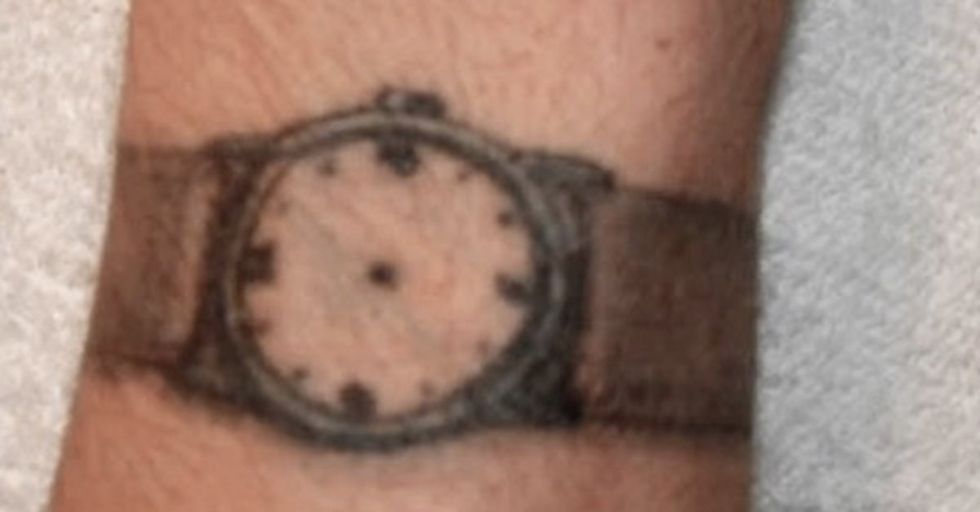 Copy of The Insane (and Frightening) Meanings Behind Prison Tattoos

Mandy Kennedy
Take a look at these freaky meanings behind tattoos and keep an eye out for them when sizing up strangers.

These days, tattoos aren't just the hallmark of an outlaw or a criminal. In fact, they're more likely to denote a barista or frat boy than they are a scourge of society.

Take a look at these freaky meanings behind tattoos and keep an eye out for them when sizing up strangers.

Teardrops, watches with no hands, and the meanings behind many more prison style tattoos that will make you grateful you're on the outside.

This inmate is covered in prison-style face tattoos. Each one holds a secret. What is the meaning behind each one? Where is this man now?

Find out the meaning behind these prison face teardrop tattoos and scroll further.

This is perhaps the best-known of all the prison tattoos. This means that you've killed someone. Not to be trifled with.

Among prison-style tattoos, the meaning behind this face tattoo is the most sinister of all. You've done the deed - and you're not afraid who knows it.

An incomplete teardrop means that the job isn't complete yet. It means they're still seeking revenge, and if they're successful, it will get filled in.

Keep an eye out for this prison style face tattoo. Not the tears of joy you're looking for!

Watch with No Hands

This means that the wearer is serving a life or very long prison sentence, and time is essentially standing still.

Chances are you won't see this prison style tattoo on the outside, but if you do, apparently they got lucky with parole!

Now you know the meaning behind this prison style tattoo.

Avoid this tattoo at your local ink shop! Hold off on the prison style teardrop tattoo for now, too.

Eyes on a Stomach

Strangely, this conveys that the person in question is a homosexual. If you could imagine the person without pants, you can probably guess what the nose of this makeshift face is.

It would be funny under different circumstances. But the meaning behind this prison style tattoo is crystal clear.

This collection of five dots means that the wearer has done prison time.

Five dots is nothing to be too worried about. Let's hope the perp has served their time and is ready to start a new life and leave the meaning behind these prison tattoos behind them.

Unfortunately for those looking to celebrate their Irish heritage, the shamrock has been co-opted by white supremacists to denote membership in one of their gangs.

Fighting Irish shamrock tattoos are still donned by Irish-American hoodlums who find themselves pinched, but all in all the modern-day meaning behind this prison tattoo is enough to steer clear away of for now.

via: The Riders Digest

This stands for "All Cops Are Bastards," and probably won't get you preferential treatment upon arrest.

It stems from the British penal system.

ACAB had a renaissance of sorts in 2020 in the wake of the BLM protests. Among the more popular prison tattoos, you might have already known the meaning behind this one!

Like the five dots, this means that the wearer has spent time locked up. The bigger the web, the longer the sentence.

This prison-style tattoo can mean 5 years or 10. For big webs, maybe 30. Don't get caught in this web!

This is predominately a Russian symbol, and signifies that the wearer isn't afraid to take a life, and is available for hire.

Not. The meaning behind this prison tattoo is no good. Stay away from the knife on neck prison style tattoos.

There are lots of barb wire tattoos that carry no significance, beyond a drunken night at a tattoo parlor, but in the joint, each barb represents a year served.

Note the Christian imagery the crown of thorn connotes. Let's hope these prisoners see a path to redemption on the horizon, or else there will be more prison style tattoos with sinister meanings in their future.

Three Dots by the Eye

Those three dots signify "Mi Vida Loca" and means that the person with the tattoo has a gang affiliation, likely of Latin American descent.

This face tattoo is among the most popular and worn by gang affiliates of all stripes. Know who you're dealing with when you come across a prison style face teardrop tattoo.

You know the teardrop tattoo meaning, so beware!

In case you had any questions about the person's demeanor prior to seeing the ink.

This is a prevalent tattoo among Asian or Russian gang members. It means the wearer spent their 18th anniversary in jail.

Commit these prison style tattoos and teardrop tattoos to memory, because you know the meaning behind them now!

Share your newfound knowledge with your friends and surprise them with these hidden and sinister meanings behind the most inked prison style tattoos!