Check out the shocking footage below... | 22 Words 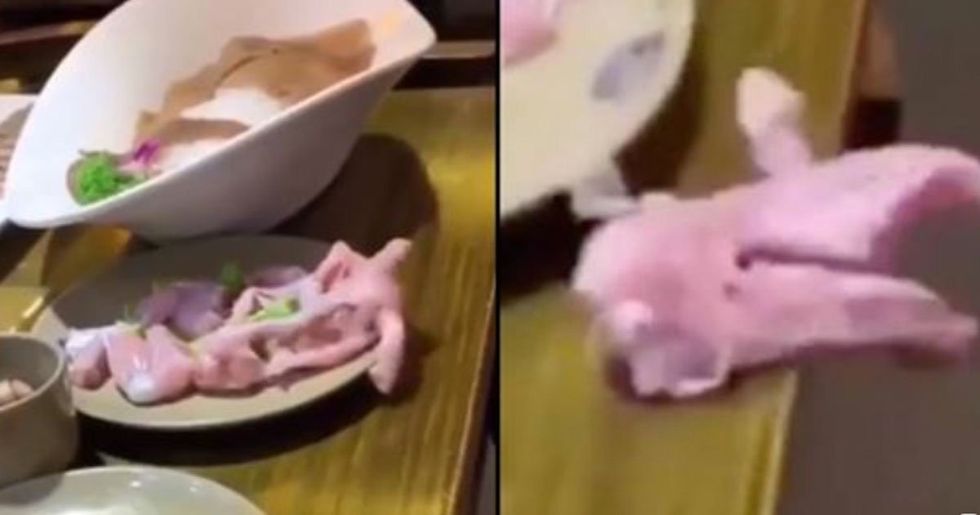 Meat Appears to 'Crawl' Off Plate and Leaves Diners Screaming

Okay, so this is quite a weird one...

When you book into a restaurant for a nice meal, whether it's for a romantic date, a quick bite to eat at lunch, or a spontaneous outing, you expect the food to be, well, not alive, right? And you certainly don't expect the meat to start moving around on the plate.

Well, a bizarre video has surfaced online of a slab of raw meat appearing to come back to life and "crawl" off the plate, leaving diners understandably horrified.

And, of course, the internet is full of theories and explanations as to what may have caused the strange outburst, and people just can't seem to agree.

Keep scrolling to watch the video in question and to perhaps draw your own conclusion on the so-called "zombie" meat...

Can you imagine going to a restaurant, ordering your food and then it starts coming to life on your plate?

You wouldn't think that that it happens, but creepily, and grossly, it does. It looks like the bizarre video of raw meat coming to life is proof of that in itself.

Although seafood is the usual culprit.

There is something slightly unsettling about your food wriggling around on your plate.

In fact, eating seafood alive, or that, at least, appears to be alive, seems to actually be quite common.

People often just say that it's "fresher." Well, it's certainly as fresh as you can get. This guy is one of many who posted a video of his plate of "live" seafood. We say "live" because some food experts say that putting salt on the creatures can cause them to move about, apparently.

But, earlier this year, a vlogger was literally attacked by the octopus that she was about to dig into.

Yes, that really did happen, and the whole thing was live-streamed on the popular video platform, Kuaishou. It might be just as creepy as the strange, new video of the raw meat going walkabouts, but we'll get to that later...

Chinese vlogger, who goes by the name "seaside girl Little Seven" attempted to eat the octopus alive, but it went horrifyingly wrong...

God knows why she was trying to eat the poor octopus alive in the first place. Come on.

The creature put up quite the fight...

It began suctioning itself to her face while the woman can be seen screaming in pain trying to pry its tentacles off her.

And it left her with a nasty cut on her face.

Kind of serves her right though, doesn't it?

Well, it seems that, now, there's an even creepier food-related video around.

Funnily enough, this time, the meat in question isn't actually, well, supposed to be alive.

The clip, which has since gone viral, shows a slab of raw meat that appears to gain a mind of its own.

In the strange clip, which took place at an unidentified restaurant, the skinned animal can be seen piled up on a plate with other similar-looking pieces of meat.

However, it then seems to hoists itself up and moves towards the edge of the plate, eventually falling off.

Onlookers watch in horror as the unidentified meat quite literally tries to make a break for it, with the woman who was about to prepare the meat, understandably screaming in terror. Stay tuned, because the disturbing video is coming up very soon.

The sight is bizarre enough as it is, but people can't even agree on what the meat actually is.

Suggestions have ranged from chicken to frog.

The internet has come up with several theories surrounding the mystery too.

One of them being that the meat is reacting to being salted, similar to that of a lot of seafood.

Other have suggested the meat was merely "fresh."

Apparently, this can mean that the muscles were experiencing spasms.

And, of course, many spectators were skeptical.

Several people dismissed the clip as being fake. After all, it's amazing what people will do for a slice of instant internet fame.

So, take a look for yourself...

But be warned, it's probably going to make you squirm.

Check out the shocking footage below...

Whatever you think, fake or not, you've got to admit that it's hugely gross.

So much so that some viewers said that they were going veggie after watching the clip.

Like this Twitter user, who was so horrified that they're vowing to ditch meat altogether. We don't blame you.

Others noted that the unidentified meat drew resemblance to a creature in Stranger Things...

Who knows, perhaps the skinned animal has actually escaped from the Upside-Down, or maybe even, dare we mention it, Area 51.

Generally, people were flat out disgusted by the footage.

Imagine how the people in the restaurant were feeling.

In light of the footage turning everyone veggie, some "Pro Meat" protestors have landed themselves in trouble recently...

While non-meat eaters, or, if we're being specific, vegans, are constantly slammed for being too passionate about their lifestyle, it seems a pair of avid meat-eaters have taken their lifestyle way beyond the extreme. And it involves eating raw squirrel. Yes, you read that right. Keep scrolling to learn about the recent gross act and what punishment the men will be getting...