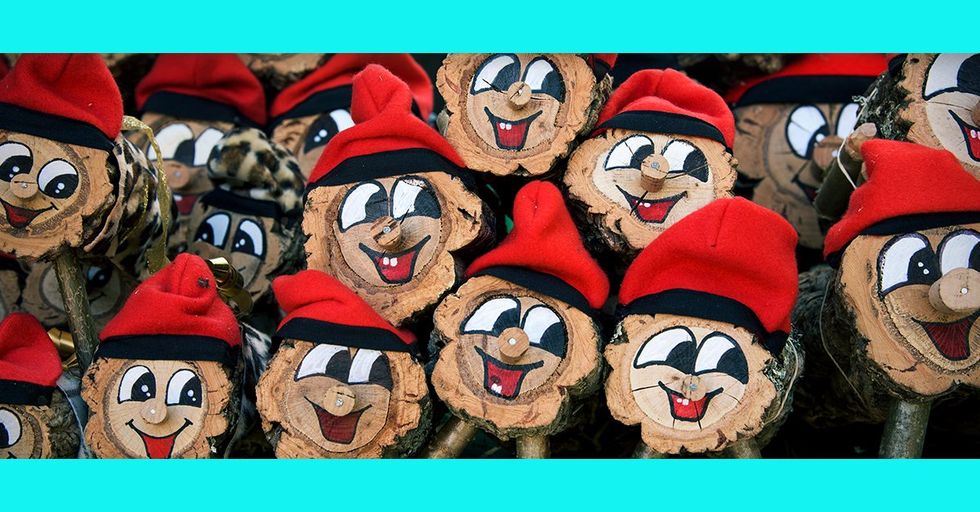 We are mere days away from Christmas and excitement is at an all-time high. We love pretty much everything about the holiday — the hot cocoa, the twinkling lights, the popcorn garlands, and the pooping logs.

Yes, you read that right. We're talking about logs that poop!

There are so many holiday traditions that — while most of us are familiar with them — are a little weird when you actually start to think about them. Take stockings for instance.

People hang socks on their mantle and then eat candy out of them on Christmas morning. You probably don't think that's weird. But it kinda is.

Then there's the tradition of decorating a Christmas tree.

It's a dead plant that you cover with lights and baubles and keep in your living room. Why? Because it's tradition!

Speaking of dead plants, don't forget this one:

Mistletoe! Another dead plant you keep in your house. This one is specifically for kissing purposes.

So, yeah. There are plenty of Christmas traditions that seem a little odd when you really think about them. But none of these others have to do with pooping.

However, we recently learned about a Catalan Christmas tradition that does have to do with pooping. And we kind of love it.

It all starts with the Tió de Nadal or "Christmas Log."

The Tió de Nadal goes by another name, though. And that name is Caga Tió — literally, "sh*tting log." Here's how it works.

You'll find a Caga Tió in many houses in Spain primarily in Catalonia and in some regions of Aragon.

Caga Tió is an adorable little fella with a happy face and a jaunty red hat. He's almost adorable enough to distract you from the fact that he's there for one reason and one reason only — to poop.

On December 8 (the day of the Feast of the Immaculate Conception), Catalan children are encouraged to start feeding the Caga Tió.

What does a pooping log eat, you ask? Well, he's not too picky. He'll take your orange peels, dry bread, or whatever leftovers you've got for him. Just don't forget to feed him. If you do, he might not poop! It's traditional to cover the log with a blanket. You know, to keep him cozy.

On Christmas morning, children beat Caga Tió with sticks while singing a song. Here's a cute video of one family's Caga Tió celebration:

There are several different songs about Caga Tió. These are the lyrics to one of them: Caga tió! caga torró avellanes i mató, si no cagues bé et daré un cop de bastó. Caga tió!" In English, that translates to: Sh*t, log! Sh*t nougats hazelnuts and mató cheese if you don't sh*t well, I'll hit you with a stick. Sh*t, log!

Here's another video where you can hear the song a little better (warning: it will get stuck in your head):

Caga Tió/brave pooping log that he is/doesn't even let the smile fade from his face/His job is not yet done/He must now poop. (The songs are very clear about the expectations everyone has for Caga Tió.)

After the singing and the beating, Caga Tió's blanket is removed to reveal the presents he pooped out!

And no matter what's in those boxes, you always get exactly what you want for Christmas — as long as what you wanted was to see a log poop presents. Interestingly enough, Caga Tió isn't the only poop-related Christmas decoration in Catalan. (Fair warning: these next images may be slightly NSFW.)

Traditionally, el Caganer is depicted as a peasant with his pants down and a little poop on the ground beneath him.
El Caganer is another traditional Catalan Christmas decoration. He's actually been part of nativity scenes across Catalonia since the late 17th or early 18th century. People usually hide one in their own nativity scenes and invite friends to find it.

While the Caganer traditionally takes the form of a peasant, there is a wide variety of designs.

Caganers can be found in the shape of politicians, athletes, and celebrities. Not even fictional characters are excluded.

You know, we had never actually wondered what R2-D2's poop looked like. But now we know! We'll never look at a bolt quite the same way again.

So there you have it. Two more Christmas traditions that you probably didn't know about until now. It may be tempting to make fun of these poop-related decorations, but just keep this in mind:

The big guy in red is always watching, and you don't want to end up on his Naughty list. By the way, have you ever considered how weird it is for an old guy to sneak into your house through your chimney to leave presents? Yep. Pretty much all holiday traditions are a little wacky.