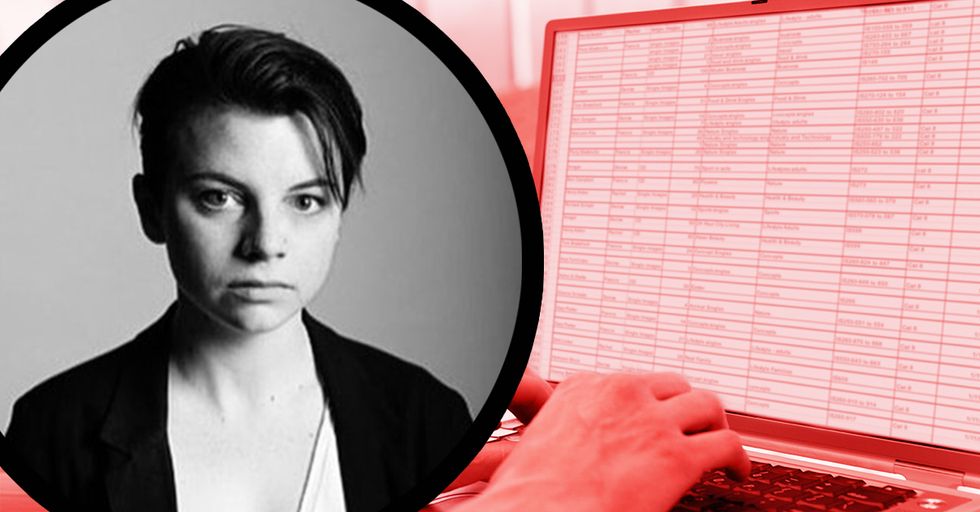 It has been called, among many things, a "Burn Book" about predatory men (à la Mean Girls), the height of internet vigilantism, and just plain shortsighted. By it, we're referring to the "Sh*tty Media Men," a crowdsourced document that came to the internet's attention last year for listing predatory men in the media.

The sh*tty men list came in the wake of the Harvey Weinstein scandal, which saw the former Hollywood producer battle accusations of sexual assault and harassment from over 80 women. The Weinstein scandal was a wakeup call that no amount of money or privilege could protect a woman from sexual harassment.
The list, which was meant to be a digital replacement for whisper networks – that is, the clandestine warnings women gave each other about the predatory men in their jobs and communities – quickly went viral as 70 men were named for issues from sexual harassment to outright rape.

Many of the men were accused by multiple (anonymous) women, and soon after were either fired or resigned from their jobs. Importantly, they were fired or resigned only AFTER being investigated by their varied workplaces. The list only named names, but for these men, their actual actions did the rest.
The list was up less than 24 hours before it was outed in a BuzzFeed article by Doree Shafrir. Although its creator took it down, the entire document itself was posted on Reddit.
The list, it seemed, had hit a nerve, and while many castigated it for creating a witch hunt, many more defended it: though its methods had been crude, the list had served a valuable purpose and its anonymous creator was a feminist hero.
Early this week, Dayna Tortorici, editor of n+1 magazine, tweeted that she'd become aware of a Harpers article in the works by Katie Roiphe, a writer reviled for pooh-poohing date rape among other things. Fearing the author of the "Sh*tty Media Men" was about to be doxxed, or outed, Tortorici tweeted a desperate plea.

It’s come to my attention that a legacy print magazine is planning to publish a piece “outing" the woman who started the Shitty Media Men list. All I can say is: don’t. The risk of doxxing is high. It’s not the right thing to do.

Soon, other women joined the movement, alternately asking that the author not be doxxed, or claiming authorship themselves.

I'm interrupting my break for one tweet only, so take a screenshot: I created the shitty men in media list. You don't need to doxx me, just head to my Instagram account, it's easy to find out where I hang out if you want to say hi.

Hold up. Mandy @harpers should know that I am the real author of the #shittymediamen list. If they publish #KatieRoiphe piece asserting another woman is behind it, not only will they ruin an innocent woman's life, but their credibility is shot forever. Best rethink this @gmelucci

Mandy, how could you? You know damn well I’m the author of that @Harpers piece. If they credit you, or anyone else, for crafting the #Shittymediamen list Joan of Snarc will see them in court!

One woman, Nicole Cliffe, a co-founder of The Toast blog, offered to pay freelancers to pull articles from Harper’s magazine.

If you have a piece in the hopper over at @Harpers, ask your editor if the Roiphe piece is happening. If it is, I will pay you cash for what you’d lose by yanking it. My email is nicole dot cliffe at gmail.

Unsurprisingly I now have a nice little stable of great ex-Harper’s pieces (some reported, some not) that could use new homes, from writers who would prefer not to go public. I can match-make if editors email me.

On Wednesday, however, something unexpected happened. The author of the List doxxed herself

28-year-old Moira Donegan, a former staffer at The New Republic claimed authorship of the List in an explosive essay at The Cut.  Writes Moira,

In October, I created a Google spreadsheet called “Shitty Media Men" that collected a range of rumors and allegations of sexual misconduct, much of it violent, by men in magazines and publishing. The anonymous, crowdsourced document was a first attempt at solving what has seemed like an intractable problem: how women can protect ourselves from sexual harassment and assault.

Because of the list, Moira lost her job, many friends, and lived in fear of being found out. She'd intended the list to be something she shared with friends. It became something much more.

1/ Rumor is, a traditional print magazine is about to out the woman that created the “Shitty Media Men" list, which would be beyond unethical.

If they do this, I want to tell you everything that will happen to her. I’m certain because it all happened to me. — Brianna Wu (@Spacekatgal) January 9, 2018

2/ ✅ She will get death threats to the point she will have to leave her home ✅ Same with rape threats ✅ Everything she’s ever done in her career will be poured over in attempt to get her fired ✅ Her family will be threatened. If she has kids, they’ll be threatened too

3/ Worst of all, this will NEVER END for her. Gamergate was almost four years ago, and I’m still dealing with it.

It is journalistically indefensible to put her in danger. There is no public interest. You will end up a cautionary tale in a journalism textbook if you publish. — Brianna Wu (@Spacekatgal) January 9, 2018

Donegan says she created the list as an avenue for women to safely share information about harmful men because there weren't many women could take.

Too often, for someone looking to report an incident or to make habitual behavior stop, all the available options are bad ones. The police are notoriously inept at handling sexual-assault cases. Human-resources departments, in offices that have them, are tasked not with protecting employees but with shielding the company from liability — meaning that in the frequent occasion that the offender is a member of management and the victim is not, HR’s priorities lie with the accused.

Donegan acknowledges the list wasn't perfect. For one, while it was shared extensively in the media landscape, minority women never saw it. They were simply not part of the conversation. Furthermore:

There were pitfalls. The document was indeed vulnerable to false accusations, a concern I took seriously. I added a disclaimer to the top of the spreadsheet: “This document is only a collection of misconduct allegations and rumors. Take everything with a grain of salt." I sympathize with the desire to be careful, even as all available information suggests that false allegations are rare. The spreadsheet only had the power to inform women of allegations that were being made and to trust them to judge the quality of that information for themselves and to make their own choices accordingly. This, too, is still seen as radical: the idea that women are skeptical, that we can think and judge and choose for ourselves what to believe and what not to.

One thing that struck her, Donegan says, was the chimerical nature of men:

In some of these conversations, we spent hours teasing out how these men, many of whom we knew to be intelligent and capable of real kindness, could behave so crudely and cruelly toward us. And this is another toll that sexual harassment can take on women: It can make you spend hours dissecting the psychology of the kind of men who do not think about your interiority much at all.

Donegan says she decided to come forward after Roiphe's fact checker contacted her:

[My fear] escalated when I learned Katie Roiphe would be publishing my name in a forthcoming piece in Harper’smagazine. In early December, Roiphe had emailed me to ask if I wanted to comment for a Harper’s story she was writing on the “feminist moment." She did not say that she knew I had created the spreadsheet. I declined and heard nothing more from Roiphe or Harper’s until I received an email from a fact checker with questions about Roiphe’s piece. “Katie identifies you as a woman widely believed to be one of the creators of the Shitty Men in Media List," the fact checker wrote. “Were you involved in creating the list? If not, how would you respond to this allegation?"

In the end, Donegan says,