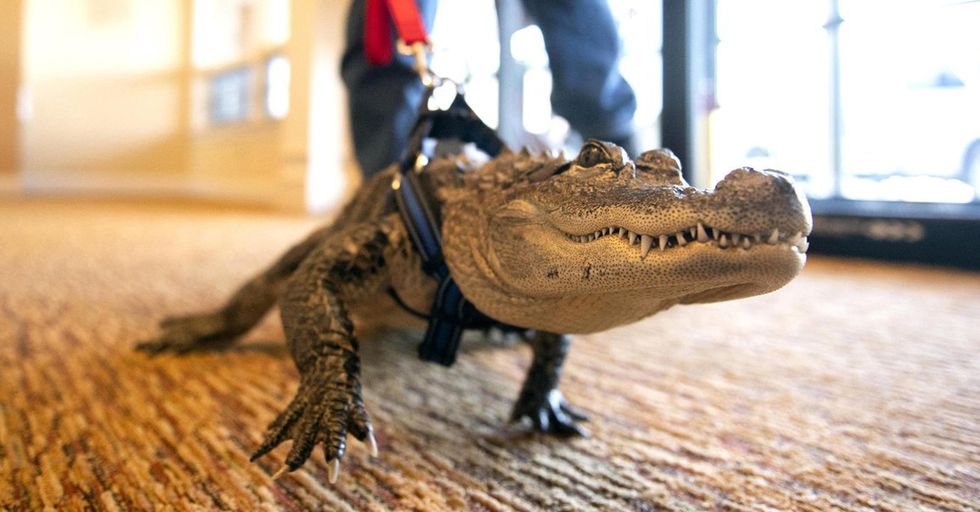 Emotional support animals are furry, sometimes fluffy, angels that assist people who have emotional disorders or mental health conditions. These animals have incredibly positive influences on people who suffer from anxiety, panic attacks or depression. Normally, these animals can travel with their owners wherever they'd like if they have their proper work vests on and are trained to be in public places.

It's pretty common to see an emotional support dog in your local grocery store or on college campuses, but there's one animal that is crawling around, supporting his owner emotionally and getting some major headline attention.

Wally, the emotional support alligator, has left the swamp and swam his way into the heart of people all over the country. Whether people are afraid to love him or love him because they're afraid, Wally is still making waves all across the world.

People have come to find that emotional support animals have provided a great service to those who own them.

Although a certified service animal is defined by a dog that has met training standards (and occasionally miniature horses), there is a wider range of animals that are considered emotional support animals.

Emotional support animals provide just as much of a service!

For people who deal with anxiety, panic disorders or depression, emotional support animals provide a companion to bring relaxation in public places or social settings.

Ever heard of an emotional support peacock?

There was a time when someone had an emotional support peacock and it made the news because an airline wouldn't allow the bird on the plane. It would be an interesting story if you sat next to a peacock.

Dogs, cats, even peacocks can be used as an ESA.

Maybe you don't have a very strong connection with peacocks, but someone out there does and it makes all the difference in the world to them.

These animals have very important jobs.

Service animals can sense panic attacks, heart attacks, seizures, and other emergency situations before they happen if they are trained properly. Support animals can be a calming presence for people with anxiety and can ultimately bring a better sense of stability and structure.

Although it's incredibly hard to resist the temptation to pet a service or support animal, it's very important to respect that they do have an important job and need to remain focused because they are working.

Do you need some scaly support?

You might have less of a temptation to reach out and pet this support animal, but his story is sure to warm your heart.

Wally is a domesticated (well, as domesticated as a reptile can be) alligator who has found his calling in life as an emotional support animal.

Joie Henney adopted Wally in September of 2015 when he was just a 14-month old baby gator. Henney's friend found Wally in Florida and ever since then, it's been a beautiful, and strange, friendship.

Henney is an animal man.

Henney is a 65-year-old man who lives in Strinestown, Pennsylvania. His love for animals started when he was only 10 after he rode a bull for the first time. He realized he loved wild animals. And adrenaline, which makes for an interesting combination.

He's also kind of a celebrity.

He's anything but basic.

“I’m not a dog person," Henney said in an interview. "I had venomous snakes. I rode bulls...I like calm things in life." Basically, he's more interesting than you and is not afraid of venomous snakes.

But even fearless men have emotions!

Brave and bold Henney still was looking for a companion in his life, one that was as exotic and gentle as he was. This is where Wally comes in. It really was fate.

It started with baby steps.

Initially, Henney had to use tongs to feed the gator, you know, just as a precaution, so he didn't get a finger bitten off by Wally's huge teeth. You can never be too careful when you've got a gator inside your house.

In an interview with the York Daily Record, Henney said he felt comfortable to pick up the animal and hold it, almost immediately. Sometimes, when you know, you know. It's just true chemistry.

It took Wally sometime to warm up.

Henney said it took just about a month before Wally started acting like a little puppy, following him around the house because "he wants to be loved and petted," said Henney.

Henney, clearly very comfortable with reptiles, began bringing Wally to schools and senior homes for educational purposes but began to notice that Wally was doing more than just teaching them about reptiles.

Wally was a social butterfly.

People really seemed to grow fond of Wally, and Henney noticed that children with developmental issues seemed particularly interested in Wally. They actually felt quite comfortable around the reptile.

The teeth aren't as bad as you think.

Although the 4-foot-6-inch gator can seem quite intimidating, Henney says there's really nothing to be afraid of in regards to how safe Wally is. "Wally's never bitten me, and he's never tried to bite anyone," Henney said in an interview. "He's pretty laid back."

Senior citizens are also a big fan of Wally.

These seniors love a little danger. Wally is a big deal at assisted living homes, where residents get a chance to pet and interact with Wally. He sure does love all this loving.

With all this love and attention, Henney had an idea.

With how comfortable people were acting around Wally, Henney thought it would be a good idea to register him as a service animal, allowing Wally to get into more places to meet more people.

But he had some haters.

Apparently, only dogs and small horses can qualify as service dogs. But that wouldn't stop Wally and Henney from finding a way to acknowledge Wally's helpful presence in social settings.

But Henney didn't give up!

In December 2018, Henney applied to have Wally as a registered emotional support animal and Wally victoriously passed. He has the papers to prove it!

Now, Wally can go wherever he wants.

Henney said now when he takes Wally for a walk, they are usually gone for about five hours because he has so many fans and interested folks who want to pet him. We've got a full-blown celebrity alligator!

Now Wally is living the life.

Wally gets to go wherever he wants and is pretty spoiled at home, too. Henney built him a 300-gallon pond in his living room for Wally to swim all day if he'd like. Henney also lets Wally roam anywhere around the house.

He has some hobbies.

He loves roaming around the kitchen, knocking over trash cans, lying on the couch and making nests out of blankets on the bed. His favorite place in the house? An empty kitchen cupboard that he has made into his own private home.

He also has his favorite TV shows.

Henney says he loves to watch Gator Guys and Swamp Boys on TV when he's not hanging out with his favorite senior citizens at the local nursing home.

Wally's also got a brother.

Henney later adopted Scrappy, a two-year-old gator, who lives with Henney and Wally. They both share their indoor pond and live a pretty lavish life.

Henney does send a warning.

He is very aware that owning an alligator as a pet, as cool as it may seem, is not very smart. He mentions in his talks with Wally that they are dangerous animals and should always be treated as such. "They aren't for everyone," Henney said.

Just to reiterate: Alligators are not pets.

I know Wally looks so friendly and lovable, but please, for the love of all good things, do not go and pet an alligator in the wild. You are not an alligator tamer.

Not everyone was a fan.

Some people were not on board with Wally, thinking Henney was downright crazy for having an alligator as a pet.

Others were huge fans!

There were quite a few Wally groupies who were rooting for his success and the equality of all emotional support animals, no matter how many teeth they have.

It's okay to be confused.

If you're somewhere in the middle, that's okay too. You can support Wally without having to pet him. There is a middle ground.

Whether you love it or hate it, Wally is still thriving.

Although slightly terrifying, Wally is still Henney's BFF and is stealing the hearts of those who meet him. You can't deny the fact that he is one of the most interesting pets you've ever seen. Share this with your animal loving friends!