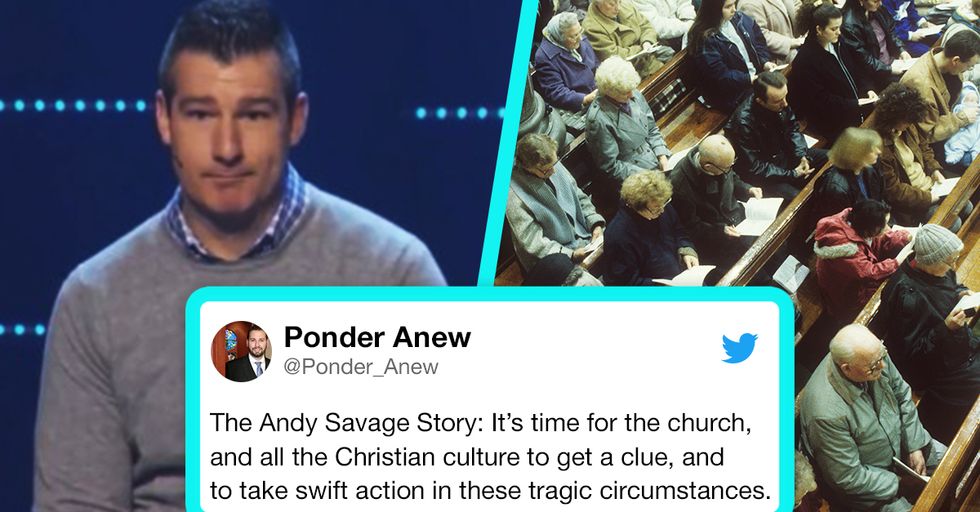 The #MeToo Movement has been everywhere. Between the numerous examinations of the feminist bonafides of this year's Golden Globes and the continued discussions over sexual harassment and abuse, the hashtag against sexual harassment and abuse has been brought up with such regularity, it's easy to forget that there's a parallel discussion going on in churches called #ChurchToo.

The church's instinct to harbor and shield abusers at the expense of their victims is baffling. If there was any pl… https://t.co/arqKYqotka
— JenHatmaker (@JenHatmaker)1515595128.0

Modeled after the Me Too hashtag, #ChurchToo seeks to shine a light on sexual harassment and abuse in churches. The hashtag was created by artists Emily Joy and Hannah Paasch, who explained why sexual abuse is even more problematic in the church.

From Andy Savage to my own abuser, these grown men in positions of spiritual authority who prey on teenage girls an… https://t.co/gmJ96K2KXE
— Emily Joy (@Emily Joy)1515353252.0

While harassment and abuse is horrifying on its own, church victims can easily be re-victimized due to conservative purity culture and entrenched patriarchy. Victims can be shamed for "inviting" assaults because purity culture and the doctrine of many churches cast a woman's body as inherently sinful and impure. This is, of course, not to mention the thousands of other homophobic issues pinned onto men's bodies if they are victimized by other men.

@andysavage Also, never again pontificate about how being gay is wrong. It’s appalling that you have used your plat… https://t.co/0F6WoX20EX
— Matthew Vines (@Matthew Vines)1515253607.0

There is also the way forgiveness is weaponized against victims. A huge part of Christian doctrine is forgiveness and victims are often asked to forgive their assailants for their crimes. In this way, the often higher-ranked assailants go on perpetuating their crimes while victims fade from memory.

It is under this lens that reports emerged this week of Highpoint Church preacher Andy Savage's admission that he had "sinned" with a woman named Jules Woodson 20 years ago. Savage made this admission to his congregation, who rewarded him with a standing ovation.

There was only one problem – Woodson was 17 when he "sinned" with her, and it wasn't so much a sin with as it was a sin against. In plainer language, Savage assaulted the innocent teenager in his car. In even plainer language, he orally raped her.

It was dark outside. As he was driving me towards my home, he passed the turn he should have made to go to my house. I asked him where he was going. I don’t remember his exact response, but it was something along the lines of ‘you’ll see’ or ‘it’s a surprise.’ I know for sure he did not tell me where he was taking me. I remember feeling special and excited, as in my mind, he obviously wanted to spend more time with me before taking me home. I assumed we were going to get ice cream.

Woodson says she was inspired to come forward by a USA Today article about Matt Lauer, the Today anchor who was fired after former colleagues accused him of inappropriate sexual behavior. She sent an email to Savage that day saying, "Do you remember that night that you were supposed to drive me home from church and instead drove me to a deserted back road and sexually assaulted me?" When he did not reply to apologize, she wrote about her horrifying experience, and the even more angering details that came afterwards in a post.
Woodson says that she tried to tell others, including her associate pastor, Larry Cotten, but he made her feel that it was her fault.

Just as I had finished telling my story, Larry immediately spoke up and asked me to clarify. He said something to the effect of, ‘So you’re telling me you participated?’ I remember feeling like my heart had just sunk to the floor.  What was he asking? More importantly, what was he trying to imply? This wave of shame came over me, greater than I had ever felt before. I had just gotten done telling him everything that Andy, my youth pastor, asked me to do. I didn't say that I screamed no, jumped out of the car and ran into the dark forest because I hadn't. I told him that Andy had asked me to perform oral sex and unbutton my shirt and I did. Every ounce of courage I had gathered, to walk in there and tell Larry the truth about what had happened to me, left in an instant. Not only did I suddenly feel this immense guilt for doing what Andy had asked me to do but I also started to feel that this was my fault somehow because I didn't stop him.

When Savage was finally sent away after rumors began to circulate, other people in the church blamed Woodson:

No one could imagine Andy doing anything bad or immoral, much less illegal, and so, it somehow became my fault that Andy was leaving. I couldn’t have been more grateful that it was the spring of my senior year as all I wanted to do was to leave town and get away from everything and everyone. I had basically shut down.  I felt so alone. It wasn’t until much later that I would realize that no matter how far away I moved nor how much I tried to move on with my life, that I could never truly escape what had happened to me. For example, when I found out that the church had contacted my parents, years later, and asked their permission to bring Andy back on staff, it brought back a whirlwind of emotions.

The most disgusting thing about this @andysavage situation is that #hpmemphis is acting like the problem here is th… https://t.co/IPjL2GtjGW
— Jacob Denhollander (@Jacob Denhollander)1515362322.0

The sad thing about Woodson's story isn't that it's extraordinary – it's depressingly ordinary. In church after church this same story unfolds, reiterating one message – the men and the image of the church are valued and the women are not. When will the church stop punishing women for the actions of men? More to the point, when will other congregants and church family stop covering for and forgiving the men in power? It's time for good churchgoing folk to prove themselves good churchgoing folk and actually protect the victims, rather than the sinners.