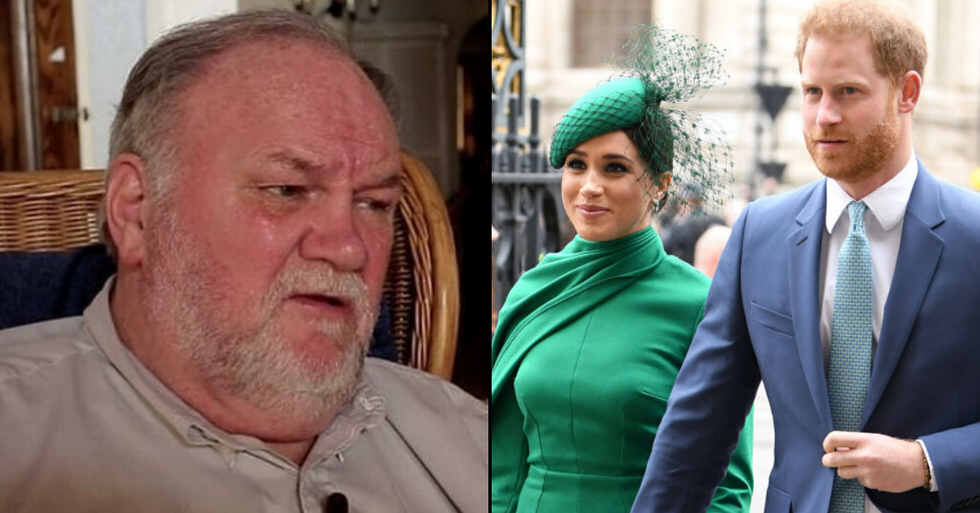 Meghan Markle has had a publically turbulent relationship with her father, Thomas Markle.

And now it seems that shocking private texts between Meghan, Harry, and Thomas have been revealed. Keep scrolling to see what they say...

Meghan and Harry have finally made the big move back to the States.

The pair are currently residing in LA after a turbulent few years in the United Kingdom, and now, private texts between the couple and Meghan's dad have been revealed. But first, let's start from the beginning...

Many argue that Meghan Markle has revolutionized the royal family.

Since their highly-publicized wedding, Meghan has taken part in many royal tours and visits all around the world.

Making it across the border mere hours before it closed, Meghan and Harry are reportedly riding out the pandemic in a secluded compound in Malibu.

And it is doing them the world of good.

Because it turns out that Meghan struggled a lot more than we realized.

Meghan is reportedly happy to be away from the vicious reporters back in the U.K.

And, on top of this, they have been doing good in their local community.

The couple have recently been spotted out on the streets of LA helping those less fortunate than them.

During this crisis, Meghan and Harry have decided to dedicate their spare time to feeding sick and vulnerable people.

TMZ captured footage of the couple who, wearing caps, gloves, and face masks, were quietly and discreetly dishing out the ready meals.

They had reportedly teamed up with Project Angel Food, an L.A. nonprofit that prepares and delivers medically tailored food to people suffering from chronic illnesses.

And TMZ reports that the couple made a large delivery to a low-income housing unit for disabled and special needs residents, and the made a few stops inside the building.

This week, however, old drama has been unearthed.

We all know that Meghan's father, Thomas Markle, is quite a controversial character. We all remember his publicity stunt just before the royal wedding... When he collaborated with paparazzi by posing for photos of him getting fitted for a suit just before his daughter’s big day?

Well, ever since that, Meghan seemingly cut all ties.

And Thomas has appeared in a handful of interviews to discuss his dismay over his banishment from Meghan’s life.

But this week, private texts have reportedly surfaced between the couple and Thomas.

New legal documents relating to the couple suing British tabloid papers have revealed text messages exchanged, highlighting how much the couple reached out to Thomas prior to their 2018 wedding.

The conversation began with this, according to reports:

“I’ve called and texted but haven’t heard back from you so hoping you’re okay," Meghan messaged. On May 6, the couple learned that Thomas posed for those infamous paparazzi photos.

Then on May 14, Thomas said he would not be able to attend the wedding.

At his point, Harry steps in.

After calling him for around a half-hour, Harry then texted...

According to the court papers, the documents include these texts from Harry: “Tom, it’s Harry and I’m going to call you right now. Please pick up, thank you" / “Tom, Harry again! Really need to speak to u. U do not need to apologize, we understand the circumstances but 'going public' will only make the situation worse. If u love Meg and want to make it right please call me as there are two other options which don’t involve u having to speak to the media, who incidentally created this whole situation. So please call me so I can explain. Meg and I are not angry, we just need to speak to u. Thanks."

“Oh any speaking to the press WILL backfire, trust me Tom. Only we can help u, as we have been trying from day 1," read a text from Harry.

After reportedly finding out about his heart attack via TMZ, Meghan then reached out to her father.

When her father texted, Meghan texted back on May 15. “I’ve been reaching out to you all weekend but you’re not taking any of our calls or replying to any texts…," Meghan wrote, according to the texts in the court papers. “Very concerned about your health and safety and have taken every measure to protect you but not sure what more we can do if you don’t respond…Do you need help? Can we send the security team down again? I’m very sorry to hear you’re in the hospital but need you to please get in touch with us… What hospital are you at?"

“Harry and I made a decision earlier today and are dispatching the same security guys you turned away this weekend to be a presence on the ground to make sure you’re safe… they will be there at your disposal as soon as you need them. Please please call as soon as you can… all of this is incredibly concerning but your health is most important."