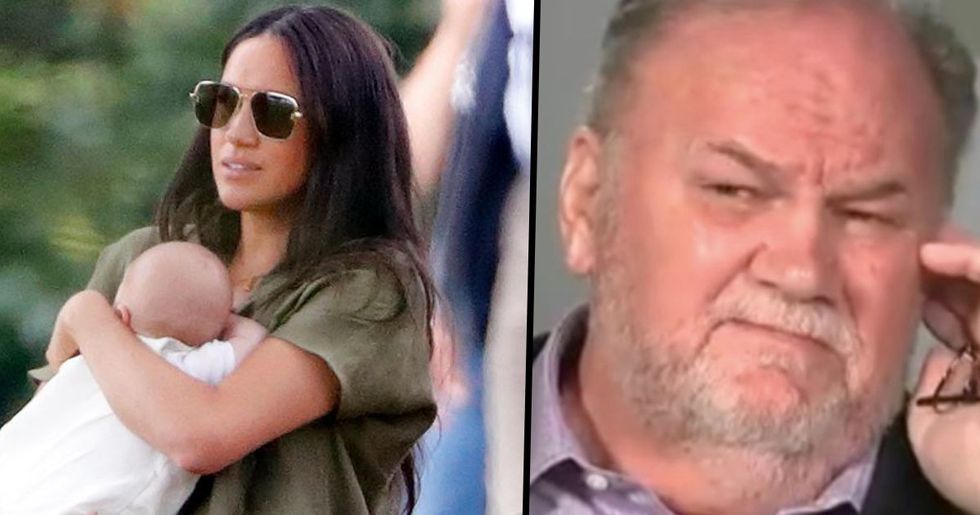 For the old romantics among us, Meghan Markle and Prince Harry are the dream couple. From their wonderful meet-cute right through to their breathtaking wedding ceremony, the span of their whole relationship is nothing short of goals. And their relationship culminated in a truly beautiful way - through the birth of the couple's first baby.

Baby Archie was eventually introduced to the world after much secrecy during Meghan's pregnancy. The entire world was gushing over the royal baby, but there is just one person who hasn't shared this enthusiasm - Meghan's dad.

Keep scrolling to learn about why the new grandad hasn't met his grandson yet, and why it's looking pretty likely that he won't be meeting him any time soon...

The pair hit it off pretty quickly...

Whenever they were spotted together, they looked the living image of love's young dream, unable to stop catching each other's eyes and grinning. They subsequently announced their engagement in November 2017

And, as you'd expect, it was filled with adorable moments.

The couple together have always held a natural instinct with children.

So, people were naturally very excited at the announcement of the couple's pregnancy.

And people were quick to speculate who the baby will look like the most.

The formal post-birth photocall at St Mary's hospital has been a tradition for forty years.

The New York Times noted that British tabloid, The Sun, wrote, “Keeping the nation in the dark over details, even after the birth, is a bad look for the royal couple [...] The public has a right to know about the lives of those largely funded by their taxes. You can accept that, or be private citizens. Not both." Yikes.

Though we think we can understand their decision...

On May 6th, Harry and Meghan's first child was born.

Buckingham Palace announced the Duchess of Sussex has given birth to a baby son weighing 7lbs 3oz.

Though we didn't get a glimpse of the royal baby straight away...

Instead, a visibly ecstatic Prince Harry greeted the press and announced the safe delivery of his new son. Harry gushed, "How any woman does what they do is beyond comprehension, but we're both absolutely thrilled and so grateful for all the love and support from everybody out there." Our hearts.

The couple didn't publicly show their baby for another 2 days.

On May 8th, a whole 2 days after the birth, Harry and Meghan walked into a room of selected media in Windsor Castle, cradling "Baby Sussex."

And his name was revealed later that day...

On Instagram, of all places. Archie Harrison Mountbatten-Windsor was officially introduced to the world with an adorable candid shot of the full family.

But there's an obvious figure missing...

It's no secret that there's been drama between the pair...

His absence since Meghan became a part of the Royal Family instantly spurred suspicions that there has been a family feud, and when he failed to attend her wedding to Harry due to "health problems," well, it only seemed to pour fuel on the fire.

Thomas claims to have heard less and less from his daughter since her marriage...

Speaking on British breakfast show, Good Morning Britain, back in 2018, Thomas insisted that he had apologized to Meghan in regards to the stunted paparazzi pictures that he agreed to pose for in exchange for payment - but she simply continued to "ghost" him.

But Thomas has made some recent and sour remarks about Harry...

The former Hollywood lighting director made a very recent dig at Meghan and Harry's consistent use of private jets. "I’ve still never met my son-in-law. Why couldn’t Prince Harry have got on a plane and flown to see me to ask for her hand?" he said to The Sun. "He obviously has no problem getting on private jets."

It has since been reported that Meghan has cut all ties with her dad...

A source told The Sun that "it’s a terribly sad situation but Meghan has made the very difficult decision that she doesn’t have an active relationship with her father anymore."

It seems that he has completely been cut off from Meghan and the Royal Family...

"This was actually a decision she made some time ago and it is something she’s now coming to terms with," the source went on to say.

The Royal couple have made their intentions perfectly clear and it seems pretty obvious that they don't want Thomas having anything to do with baby Archie. "It’s obviously heartbreaking for her but she has to protect herself, her husband and her son," the source said.

Thomas seems to be desperate to meet his new family...

In his interview with The Sun, Thomas went on to say: "I would like them to send me a picture of Archie so I can frame it and put it on my wall beside the one of Meghan." "Of course I’m disappointed not to see Archie. I had hoped becoming a mother would mellow Meghan and she would reach out."

This refusal has clearly made the estranged dad bitter...

He went on to say, "Everyone raves about how gracious and wonderful they are but they are not wonderful to their own family."

We don't know whether Thomas' claims are true...

And we have no idea about what is said or what goes on behind closed doors. It is clear that Meghan no longer wants her dad in her new, and much more polished life, and Thomas is going to have to simply accept the fact that his daughter has chosen her new family over her old.