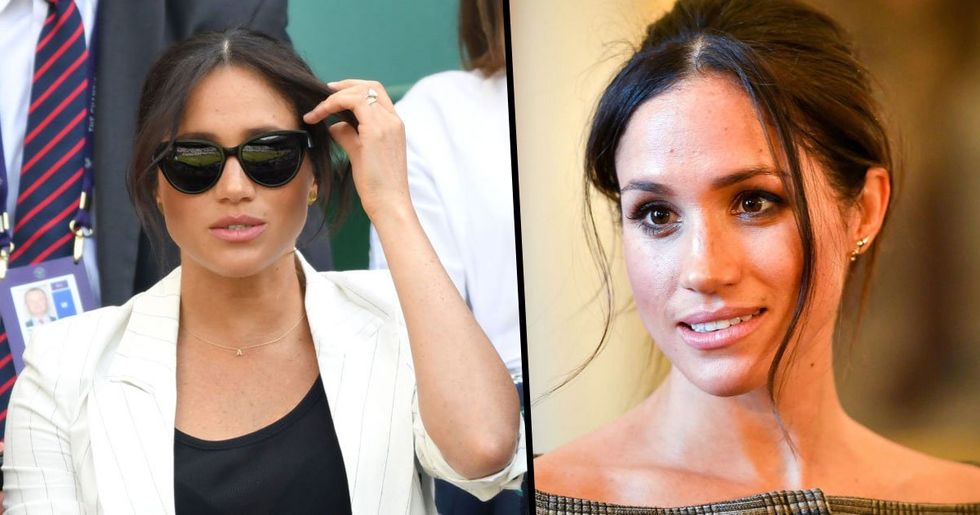 There's always been something about the Royal Family that we Americans simply can't get enough of. Whether it's their constant grace and glamor or simply the fact that we don't have our own clan of Royals, there's something about them that has always had us hooked.

And ever since one of our own moved into Buckingham Palace, we've felt more connected to the Royals than ever before. American actress, Meghan Markle, has been making waves ever since she swam across the pond, and the world has become obsessed with her relationship with Prince Harry and, more recently, the birth of their first child, Prince Archie.

Meghan's journey to royalty hasn't been a smooth one, as the Duchess has found herself being constantly criticized by the press and the public. It seems like the girl can do no right!

And her latest move while visiting her friend and tennis star, Selena Williams, at Wimbledon may have revealed a huge royal secret... Let's just say that Prince Harry won't be too happy.

Meghan reportedly met Prince Harry when a mutual friend set the pair up on a blind date while she was visiting London back in 2016.

Though Harry had apparently never heard of the actress when he first met her.

At the time, Meghan was best known for her role in the legal drama, Suits. Though in their first and only televised interview together, Prince Harry sheepishly admitted that he had "never, never even heard of" his now-wife. Awkward...

But the pair hit it off immediately.

Though they initially kept their relationship under wraps for the first 6 months, the couple began appearing in public together, and the world was struck by their natural chemistry.

It wasn't all smooth sailing for the actress, though.

The Brits really weren't impressed with the presence of an American in their Royal Family, were they? Though the majority of people welcomed Meghan with open arms, she was still subject to torrents of horrendous abuse, from both the public and the press.

Kensington Palace was forced to release a statement...

Being a royal isn't all glitz and glamor. In November 2016, Kensington Palace released a statement on behalf of Prince Harry, calling for the sexist and racist harassment of Meghan by the public and media to be brought to an end.

Despite the abuse, Meghan stuck by Prince Harry.

And they announced their engagement the following year. Speaking in an interview with Vanity Fair before their engagement, Meghan had gushed about their relationship. “We’re a couple," she explained. “We’re in love. I’m sure there will be a time when we will have to come forward and present ourselves and have stories to tell, but I hope what people will understand is that this is our time. This is for us. It’s part of what makes it so special, that it’s just ours. But we’re happy."

The couple got married the following year.

In May 2018, the world watched in awe as Prince Harry and Meghan tied the knot in a lavish ceremony fit for a queen... Literally. As is of royal tradition, the pair wed in St George's Chapel at Windsor Castle in London.

And the highly-anticipated pregnancy announcement came shortly after...

It's what everyone was waiting for. In October 2018, 5 months after their wedding, Kensington Palace released an official statement which announced the pregnancy of the newly appointed Duchess of Sussex.

Speculation over what the new royal addition will look like was rife. Because, let's face it, the baby photos of both Harry and Meghan are nothing short of adorable.

Because of course they did. Though this one is kind of feasible... We know your game, Britain!

On May 6th this year, Harry and Meghan welcomed their first child, Archie Harrison Mountbatten-Windsor.

Though the couple have taken a less royal approach with the arrival of Archie.

Rather than giving birth in St. Mary's Hosptial in London, where generations of royal women have delivered their children, Meghan and Harry opted for a private home birth at Frogmore Cottage instead.

And they didn't reveal their new addition immediately.

So people were outraged, obviously. Instead, Meghan and Harry chose to wait 2 days before they introduced Archie to the world, which is quite reasonable if you ask me...

They have remained notoriously private.

The Duke and Duchess have kept their home life extremely private, and haven't shared any pictures showing baby Archie’s face. Though they did tease an adorable picture of his tiny feet on their shared Instagram account, @sussexroyal.

Apart from the identity of baby Archie, there has been one other question bubbling on everyone's lips...

Who is going to be the godparent?!

Sadly, the identity of Archie's godparents is remaining a firm secret.

A statement from Buckingham Palace read: “Archie Harrison Mountbatten-Windsor will be christened in a small private ceremony by the Archbishop of Canterbury in the Private Chapel at Windsor Castle on Saturday, July 6." “The godparents, in keeping with their wishes, will remain private."

The world has been left guessing who the new godparent could be...

Meghan has a star-studded group of friends, and her baby shower line-up prior to Archie's birth said it all. An array of her celebrity friends attended the glamorous New York baby shower. Amongst the select few invited were former Suits star, Abigail Spencer, and tennis champion, Serena Williams.

Meghan and Serena have been close friends for years now.

They met at the 2010 Superbowl in Miami, and reportedly hit it off from the get-go. Speaking in a Q&A for DIRECTV's Celebrity Beach Bowl, Meghan discussed how they met, "We hit it off immediately, taking pictures, laughing through the flag football game we were both playing in, and chatting not about tennis or acting, but about all the good old fashioned girly stuff. So began our friendship."

Though details of the baby shower have been kept tightly under wraps, Serena spoke briefly about the event to Business of Fashion: "Planning something like that takes a lot of effort. I’m a perfectionist, so I’m like, 'Let’s make it perfect,'" she told the outlet. "It’s been a lot the last few days."

The shower took place at the Grand Penthouse of the Mark Hot; it included a flower arranging lesson by floral designer, Lewis Miller, and featured food from Michelin-star chef, Jean-Georges Vongerichten.

That's what friends are for, right?

Meghan has seemingly returned the favor by surprising her friend at Wimbledon to watch her match against Kaja Juvan on Court One.

This is where things get suspicious...

The Duchess' presence at Wimbledon has stirred a bit of excitement amongst eager Royal fans, with some people saying she may have accidentally revealed the identity of Archie's godparents.

And they don't think that it's Serena...

Nope. Though the Duchess was there to cheer on Williams, people don't think that she's made the cut to be the godparent for Archie. Poor Serena...

Meghan attended the event with 2 of her oldest friends.

Meghan was pictured sat in between 2 of her old university friends, Lindsay Roth and Genevieve Hillis.

Royal fans have been quick to jump to conclusions after the trio's appearance, with many excitedly assuming that these women could be Archie's godparents. The duo will be attending Archie’s private Christening this Saturday, with Lindsay Roth thought to be one of Meghan’s closest friends.

People believe that she has accidentally showcased the godparents.

If indeed the two ladies sitting either side of Meghan - Genevieve Hillis and Lindsay Jill Roth - are two of Archie… https://t.co/jZLRv4xrvh
— Russell Myers (@Russell Myers)1562258298.0

The Mirror's Royal Editor, Russell Myers, hinted that Meghan may have shot herself in the foot with her Wimbledon company.

Other people agreed with him...

The presence of Meghan's 2 closest friends together is apparently confirmation that they are indeed Archie's godparents. Because, apparently, you and your friends can't hang out without giving them custody of your child...

And others thought that it was a load of nonsense.

To be fair, it does all sound pretty ridiculous...

People think that Meghan is simply trolling the media...

And, if she is, fair play to the girl!

We may never find out the identity of Archie's godparents...

And so what if we don't? The Royals share so much of their lives with us anyway, they have every right to keep some things tightly under wraps. Let's leave Megs and Harry to it, okay? There are plenty of other celebs to stalk, anyway.