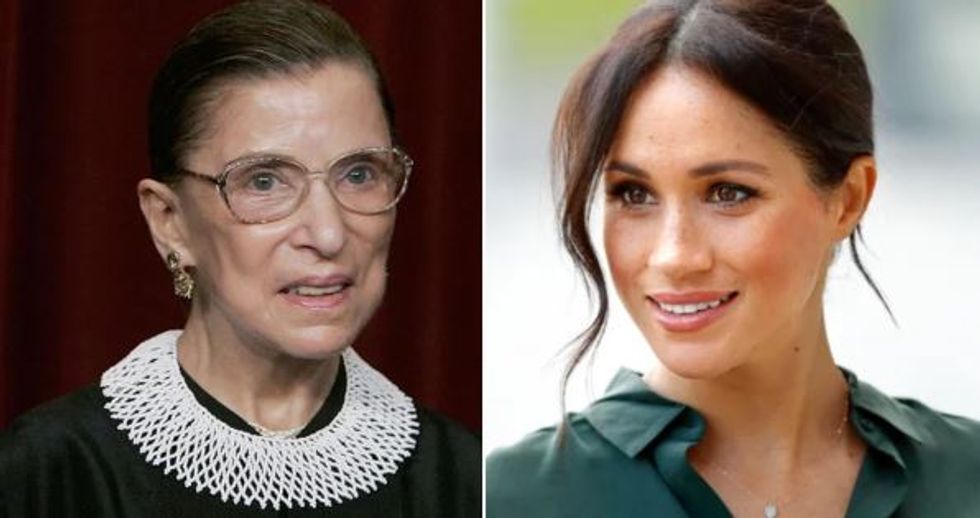 The tragic news that Ruth Bader Ginsburg has died at the age of eighty-seven arrived just a matter of hours ago.

Thousands upon thousands of tributes have been paid to Ginsburg, but Meghan Markle's is particularly poignant.

Keep on reading to check it out.

Ruth Bader Ginsburg has passed away...

Ginsberg was brought up in a life filled with tragedy.

Her big sister died when she was just a baby...

And her mom, who was her biggest source of encouragement when she was growing up, died when she was in high school.

But regardless of these heartaches...

Ginsberg went on to earn her bachelor's degree at Cornell University and she became a wife and mother before enrolling at Harvard Law School.

And after her graduation, she turned to academia. Ginsburg was a professor at Rutgers Law School and Columbia Law School, teaching civil procedure as one of the few women in her field.

But this doesn't mean life was smooth sailing for the young woman...

She faced a lot of rejection in law due to her gender and the fact that not many women worked in the field at the time.

And this was the first law journal in the US to focus exclusively on women's rights.

She was the project's general counsel in 1973. The Women's Rights Project and related ACLU projects participated in over 300 gender discrimination cases by 1974.

As the director of the ACLU's Women's Rights Project, she argued 6 gender discrimination cases before the Supreme Court between 1973 and 1976...

She won 5 of these cases, and rather than asking the court to end all gender discrimination at once, Ginsburg charted a strategic course - taking aim at specific discriminatory statutes and building on each successive victory.

Legal scholars and advocates credit Ginsburg's body of work with making significant legal advances for women under the Equal Protection Clause of the Constitution...

And taken together, Ginsburg's legal victories discouraged legislatures from treating women and men differently under the law.

In 1980, Ginsburg was nominated by President Jimmy Carter to a seat on the United States Court of Appeals for the District of Columbia Circuit.

President Bill Clinton then nominated her as an Associate Justice of the Supreme Court in 1993...

She worked tirelessly for the rights of women during her career...

And she famously spoke out about the subject of abortion in 2009, saying that "the government has no business making that choice for a woman."

Over the following years, she earned herself the nickname "The Notorious R.B.G"...

This was in reference to the rapper, The Notorious B.I.G, and this was also due to her firey liberal dissents and her refusals to step down.

Her first book, My Own Words, was published in 2016 and it quickly debuted on the New York Times Best Seller List for hardcover nonfiction at No. 12.

Ginsburg was also an avid supporter of the #MeTooMovement...

And reflected on her own experiences with gender discrimination and sexual harassment, including a time when a chemistry professor at Cornell unsuccessfully attempted to trade her exam answers for sex.

But earlier this month, Ginsburg was admitted to hospital after contracting an infection...

And her admirable life today tragically came to an end.

According to the Washington Post, the Supreme Court announced that the Associate Justice passed today of metastatic pancreatic cancer at age 87.

Tributes have been pouring in for Ruth.

But one of the most poignant tributes comes from none other than Meghan Markle. The Duchess of Sussex wrote:

With an incomparable and indelible legacy, Ruth Bader Ginsburg will forever be known as a woman of brilliance, a Justice of courage, and a human of deep conviction.

“She has been a true inspiration to me since I was a girl."

Honor her, remember her, act for her.