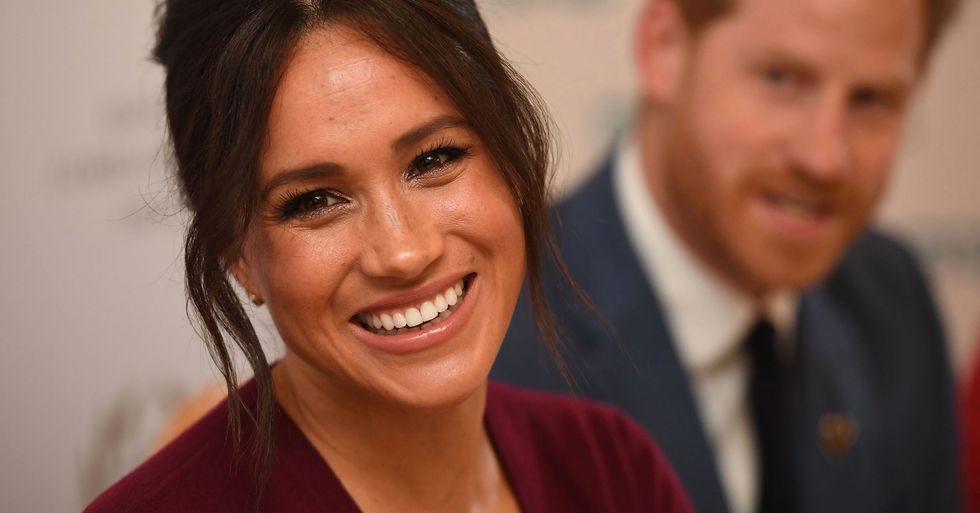 Meghan Markle, the Duchess of Sussex, is known for her dazzling good looks and youthful appearance... But what if we told you that the woman simply doesn't age?

Okay, that sounds a little ridiculous, we know. But it's certainly a possibility!

This week, old school photos of Meghan at her prom and a Christmas dance have recently resurfaced, and it is simply creepy to see how little Meghan has changed or aged throughout the decades.

Keep scrolling for the full story, and to see the photos for yourselves...

Meghan Markle has risen to unprecedented levels of fame in the last couple of years.

You know? The American actress who married a British prince?

The world has become obsessed with the newest addition to the royal family.

An American infiltrating the British monarchy caused quite the fuss, to say the least.

But even before her transition into a royal...

Ms. Markle was quite well known in the world of Hollywood.

Meghan has spent her life pursuing a career as a screen actress...

And went on to appear in a variety of different TV shows and series.

Meghan landed the role of the brilliant paralegal, Rachel Zane, on the USA Network show, Suits.

Suits put Meghan on the map.

But it was soon to become evident that Meghan was going to be a little more than just an actress.

She'd caught the eye of one royal in particular...

Dating rumors between Meghan and Prince Harry began circulating in 2016 after the pair met through mutual friends.

In 2017, the couple made their relationship official...

And it didn't take them long to reveal that they had secretly got engaged, and were due to be wed in a lavish royal ceremony in Windsor Castle the following year.

And their natural chemistry was undeniable, as the pair sat holding hands, unable to contain their delight.

And Meghan stunned the world in a stunning, yet elegant Givenchy gown.

It became one of the most-watched televised events of all time...

And their guest list was the most star-studded thing you ever saw - it combined British royalty with a whole host of American celebrities. At what other event would you find Oprah, Tom Hardy, the Beckhams, and Princess Eugenie?

Meghan has become a solid member of the Royal Family.

She makes the most idyllic princess.

And, despite the high volume of negative press Meghan has received, most people love the Duchess of Sussex for her refreshing and modern twist on the usually rather traditional monarchy.

And people also marvel at how young the thirty-eight-year-old looks.

Even after the birth of her son, Archie...

Meghan was simply glowing, and many women were left baffled as to how put together she looked after the grueling task of childbirth.

Motherhood hasn't aged the duchess in the slightest...

Is it good makeup? A good hairstylist? Or does she simply not age?

It could very well be the latter...

Because a photograph of a sixteen-year-old Meghan has emerged, and it's eerie how little she has changed throughout the last few decades.

The caption reads, "16-year-old Meghan Markle posing with her first boyfriend Luis Segura at a high school Christmas dance in 1997", and shows a teenage Meghan wearing a black sparkly dress and a silver choker, smiling as she leans into her date.

Another photo from the same era also began circulating online...

And people were dumbfounded at how little the actress had changed. "She hasn’t changed In her appearance AT ALL" one social media user commented, while another added, "She still looks like this, literal goddess."

And while some people were marveling at Meghan's graceful aging...

Many weren't convinced and blamed "lots of money" and "lots of plastic surgery" for her youthful appearance. Who knows? But, despite her youthful and glowing appearance, it has been recently revealed that The Royal Family have some major concerns for her welfare... Keep scrolling for the full story.