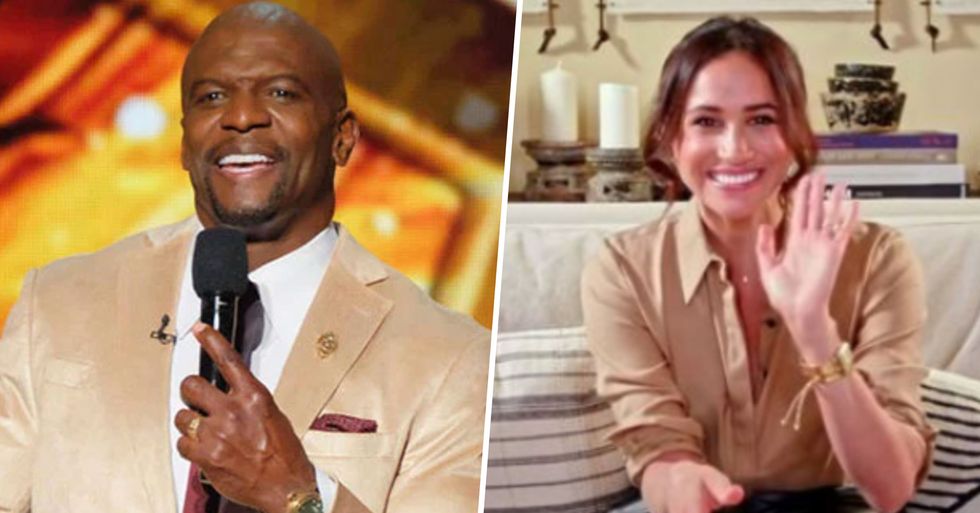 People were thrilled to see the star supporting one contestant for a really adorable reason...

Who doesn't love America's Got Talent?

The show brings us the weirdest and most wonderful in terms of entertainment.

There are many reasons to watch.

But there was one rather unexpected reason this weekend.

Because one guest inspired an exciting guest appearance.

From none other than Meghan Markle herself!

Meg is never far from the headlines.

But even so, people were super excited to see the star.

And the reason she was appearing was surprisingly adorable.

Which is quite shocking, given the list of appearance demands that have recently surfaced...

It looks like Meghan and Harry are thinking about public appearances once again, after stepping out of the spotlight earlier this year...

But, after a document detailing the entire thing was obtained by the Telegraph, it seems they have quite a few demands to make first.

It comes after the news of their new Netflix deal...

Which is sure to have riled some people up.

And even though she didn't fit the criteria for a traditional royal partner, the pair hit it off instantly.

Meghan was an American divorced woman...

And even though these factors are usually forbidden in the Royal Family, Harry went ahead with his heart and made things very serious with his new love.

It didn't take long for the couple to announce their engagement...

And they looked happier than ever.

And not ones to waste any time, the couple announced their pregnancy shortly after the wedding.

Archie Harrison Mountbatten-Windsor was born in May of 2019.

This lead to Meghan and Harry making the bold decision to step down from royal duties earlier this year.

It seems that Meghan literally can't do anything right...

And so many have now realized that this hate is a matter of racism.

And no other royal has ever received the volume of hate in which Meghan has - not even Prince Andrew, who was accused of being involved in the Jeffrey Epstein scandal recently.

It has also been reported that since the pair's big move to L.A, Harry's relationship has been strained.

The future King of England reportedly didn't take it well when Harry and Meghan announced their departure from the Royal family and their relationship continues to be on the rocks.

Things have since been ramped up a notch following the announcement of the pair's new Netflix deal.

The couple has founded a yet-to-be-named production company that will make documentaries, feature films, scripted shows, and children’s programming - and it was Netflix that took the bait, according to the New York Times.

“As new parents, making inspirational family programming is also important to us."

Money aside, the issues the pair are hoping to bring up in their documentaries are something Meghan has spoken up about in the past. Just last month she spoke at the Girl Up Global Leadership Summit, for instance.

In fact, people regularly slam her online for it. For instance, Meghan found herself in the firing line for speaking at an online summit organized by “When We All Vote," in which she told voters “If you are complacent, you are complicit."

So, we can't imagine the Netflix project is going to go down well with everyone.

Nevertheless, the couple have signed the major deal.

And now, on top of all this, the couple have allegedly listed demands involving their speaking appearances.

According to Page Six, the couple recently signed on with the New York-based powerhouse Harry Walker Agency to represent them for speaking engagements.

According to a 4-page “Virtual Event Request Form" devised by HWA for the royal duo have a list of demands that must be adhered to.

The pair will have the say on every detail of their online appearances, as per London’s Telegraph, which obtained a copy of the conditions.

Firstly, the form states this:

"The choice of Introducer and Moderator will be at the final discretion of the Speaker."

The couple is believed to be able to ask for up to $1 million per speech and "the fee will need to be paid directly from the contracting organization’s account."

Before they agree to any appearance, the couple reportedly wants an estimate on the number of attendees along with a description of “who they are.’’

Harry and Meghan also want to know everyone helping to fund the event — “corporations, individuals, members of the organization and government entities or organizations’’ and “what they are receiving in return for their sponsorship.’’

The duo said they want to be told whether “any live or pre-recorded program elements will run concurrently with the Speaker’s presentation" and who else might be speaking.

“What will the audience see on screen? Will you incorporate any branding? What will the Speaker see on-screen immediately prior to and during their presentation?" the form asks.

Harry and Meghan want to know what “connection format" the event will be broadcast through, in case of any technical issues.

But, in spite of these rules, Meg did make a surprise appearance this week.

She appeared on America's Got Talent in support of one particular contestant.

Archie Williams has been a standout star of the season.

He also has an incredible backstory, having served  36 years in prison after being wrongly convicted of rape and attempted murder at the age of 22.

And after performing, Terry Crews introduced a very special message.

"Hi Archie, Just wanted to let you know that we've been so moved by your story and we've been cheering you on every week and it's not just because we're partial to the name."

"So, a very special message to you that I'll probably be saying all of my life, but on this night it's specifically for you."

"Archie, we are proud of you and are rooting for you, we can't wait to see what you do. We're in your corner, have a good night."

Want a slightly less heartwarming royal story? Scroll on for the horrifying discovery in Kate and William's lake...