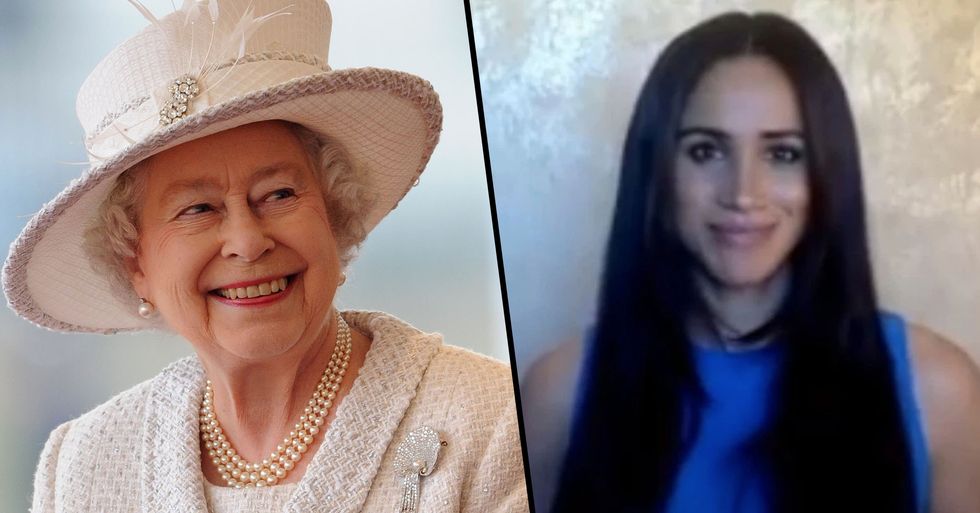 Meghan Markle Takes a Swipe at the Queen in Shock Speech

This week, in one of her first major events since stepping down from senior royal duties, Meghan Markle made a shock speech in which many think she took a swipe at the Queen. Keep scrolling for the clip...

And this week is no exception...

On Tuesday, Meghan spoke at the Girl Up Global Leadership Summit, and it seems many think she made a dig at the Queen during the shocking speech.

Meghan and Harry may have stepped away from senior royal duties...

But Meghan has been keeping up momentum when it comes to charity work and speaking out for causes she believes in.

As mentioned before, on Tuesday, the former Suits actress spoke at the Girl Up Global Leadership Summit.

Meghan made the ten- minute pre-recorded video for the event, made at the Beverly Hills mansion they family are currently residing in.

During the clip, Meghan urges viewers to put pressure on those in power...

Stating that leaders “don’t listen until they have to," adding: “Keep challenging, keep pushing, make them a little uncomfortable. Don’t be afraid to do what you know is right even when it’s not popular."

She continued by urging people to "feel uneasy" and challenge the “status quo" until it “snaps."

But it's what she said next that really divided people, for one huge reason.

Meghan goes on to seemingly address her stepping down from royal duties to live in LA.

"Your gut will tell you what’s right and what’s wrong; what’s fair and unfair."

After watching the clip, several viewers read further into these comments.

And many believe the former Duchess was attempting to make a dig at the Queen. According to The Sun, Palace sources said the Royal Family was not made aware of Meghan’s speech as it was a private event.

People completely hit out at Meghan.

No matter what she does, she can't seem to do anything right in some people's eyes.

@Murky__Meg Everything she says is her trying to tell her delusional side of her story. What was said in that speec… https://t.co/LQ2OKyfUc5
— Debbie Stewart (@Debbie Stewart)1594805719.0

Some even called for the Queen to completely strip them of royal status.

Many, however, praised her speech, even comparing her to the late Princess Diana.

I must say out from Royal Protocol #MeghanMarkle comes into her own power ! #PrincessDiana also began to shine on h… https://t.co/X6RUrYMyA4
— wunderingspirit (@wunderingspirit)1594753360.0

And many thought she was the perfect woman to speak at the summit. "Are y'all read for our Meghan? For more than 20 years, since she was 11 years old, Meghan Markle has been advocating for women and girls. She's not new to this. I can't think of anyone more qualified and prepared and committed that can address our girls right now. #MeghanXGirlUp."

You can watch the clip in question for yourself below:

Our guess is that she's simply trying to empower girls to make a change. Either way,  they'll always be critics out there. For more on Meghan, scroll on to hear about her political plans...