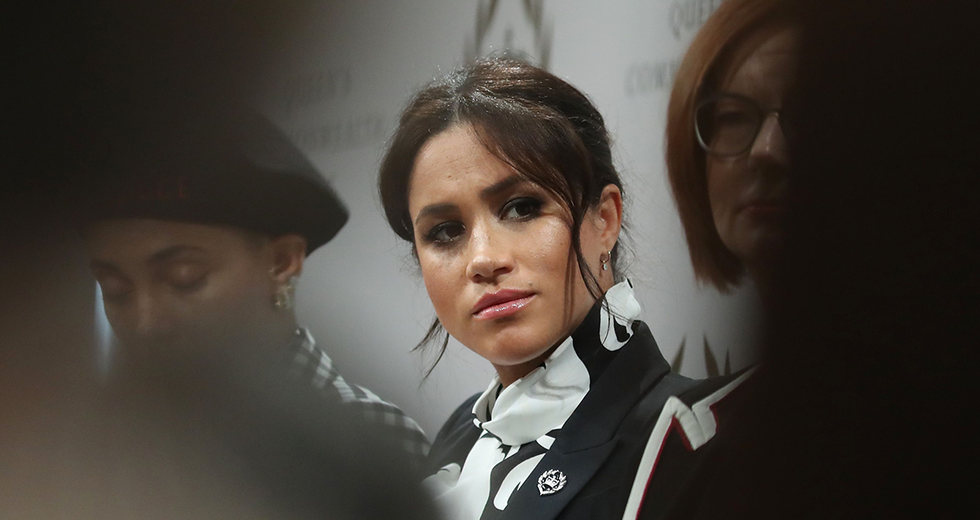 President Trump is scheduled to visit the UK from June 3 through June 5. The Royal Family has prepared an agenda, but Meghan Markle will not attend any of the events.

Meghan recently gave birth to her first child with Prince Harry, which could be the reason she's choosing to stay home. However, in the past, Meghan criticized President Trump for his divisiveness and misogyny. The Palace has not made a statement about her intentions.

As much as Meghan might not approve of Trump as president, they have both assumed roles with set expectations, and both have gone their own way.

Meghan Markle will not attend any of the events scheduled during President Trump's visit to the UK.

ET reports that Meghan Markle is abstaining from meeting with the President. This breaks with precedent, but neither Meghan nor Trump is stranger to breaking tradition.

Trump will visit June 3-5, and the rest of the Royal Family plans to host a series of events for Trump and his wife, Melania.

Trump notoriously hates traveling but plans to stop in London next week. The Royal Family has released the agenda for the trip.

Meghan Markle has not resumed royal business since the birth of her child.

Meghan gave birth to baby Archie on May 6, 2019. Apart from the presentation of the baby two days later, she has not attended royal events since the birth of her child.

However, the British government worries that Trump's visit will cause civil unrest.

When Trump visited in 2018, he was met with thousands of protesters, some of whom donned particularly funny costumes and signs.

Trump's last UK visit in 2018 made the news for more than just the protests.

He kept the Queen waiting for him, he didn't bow to her, and he turned his back to her. All of those things go against protocol when dealing with the Queen.

The Palace has not made a statement about why Meghan is declining to attend the engagements.

The Royal family is careful about what they do and do not comment upon. Although it's clear Meghan will not participate, there is no official statement as to why.

Meghan Markle has previously criticized Trump for his politics and behavior.

On a late night show in the US, before her wedding to Prince Harry, she called Trump "misogynistic" and "divisive," citing his comments and actions.

Meghan claimed that if Trump were elected, she would stay in Canada.

Meghan's TV show Suits shot in Canada. She insisted that if Trump won, she would stay there. Of course, then her whole life changed with the engagement to Prince Harry.

During the election, Meghan supported Hillary.

Once becoming a Royal, Meghan had to delete all of her social media accounts, but she was a vocal supporter of Hillary Clinton in the 2016 election.

Meghan Markle has marched to the beat of her own drummer as the Princess.

She's come under criticism for defying certain royal customs. There have been stories in the UK press about dust-ups between herself and Kate Middleton over such things.

For example, she and Harry had "glamourous" engagement photos.

Meghan was criticized for wearing couture in her engagement photos, as opposed to the more traditional and humble photos William and Kate shared with the world.

As Princess, Meghan wears clothes in which she feels comfortable.

She wears her hair in a slightly undone bun, and she wears pants, unlike the Queen and Princess Kate who always look polished in skirts and dresses.

At her wedding, she walked herself down the aisle.

Meghan has a dysfunctional relationship with her father and chose to walk down the aisle unescorted. That's a bold decision at any wedding, but especially an event as formalized as a Royal Wedding.

Meghan and Harry picked their own minister who gave an impassioned speech.

Instead of the traditional bishop to attend the ceremony, Meghan and Harry had a minister from Chicago deliver the sermon and perform the service.

They had a mostly black choir for the ceremony.

Meghan has never shied away from her heritage or where she has come from. Part of her allure is her authenticity, on display at her wedding in many, many ways.

Meghan and Harry present as genuinely in love.

Kate and William rarely kiss or cuddle in public. Meghan and Harry hold hands in public frequently. Their relationship feels closer to a "regular" celebrity couple, as opposed to a royal one.

Upon arriving at the Royal Academy of Arts, Meghan closed her car door, causing a scandal. The Palace has since come out saying that their concern was security, not royal protocol.

She's managed the birth of her first child in the way she wanted.

Instead of taking a press photo when leaving the hospital, Meghan took pictures for the press when she was ready a few days later. Their child is the first biracial royal, with both American and British citizenship.

So far, she's made it clear that she makes her own decisions.

Like Princess Diana made news by just being her, Meghan is doing much the same. By bucking tradition, she shines a light on how ridiculous some of these traditions are.

Kate Middleton has behaved much more per royal standards.

There are rumors that they've had tension over this. But, it feels more like the media pitting women against each other than anything real.

He ran on a platform of draining the swamp and changing business as usual. His argument was that he would change Washington.

But, his disruption has mostly erred toward the negative.

He's bucked traditions too, but mostly those pertaining to justice, diplomacy, and decency. He's not a popular man abroad.

Trump has used words of praise for Kim Jung-Un and Putin, among others, going against decades of precedent in American foreign policy.

He's the first president to be laughed at while speaking at the UN.

While making a speech at the UN, there were audible laughs after he bragged about the state of the US.

He referred to Haiti and African nations as "shithole" countries.

He made racist statements about other countries after senators proposed protections for certain immigrants.

After Hurricane Maria devastated Puerto Rico, Trump visited and threw rolls of paper towels at a group of Puerto Ricans in some kind of failed photo op.

He refused to shake Merkel's hand.

During his first face-to-face meeting with Angela Merkel, Chancellor of Germany, Trump appeared to reject Merkel's request for a handshake.

At a G7 meeting, Trump pushed his way to the front of the photo, shoving the Prime Minister of Montenegro.

In an era of "disruption," Meghan Markle leads her own charge.

In many ways, it feels as though old systems are falling apart at the moment. Some of that change is positive and some of it feels negative.

She shows no signs of "falling into line."

Although this particular abstinence can be easily, and fairly, attributed to the fact that she just gave birth, maybe if it was a different leader who didn't make racist and misogynistic statements, Meghan would attend.