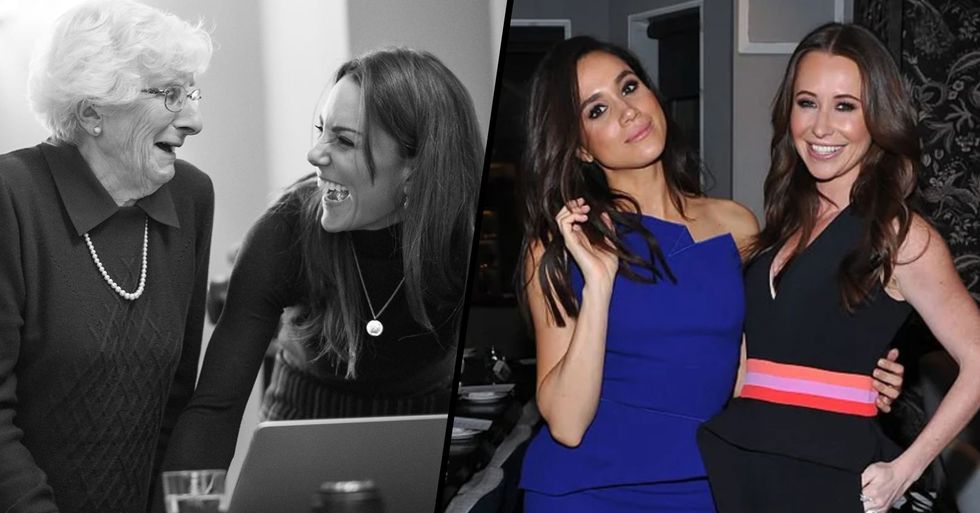 Since Meghan Markle and Prince Harry made things official back in 2016, it was only a matter of time before all eyes were on Meghan and Kate - scrutinizing how well they got along. Fast forward 4 years, and it's safe to say that there's been a lot of speculation over so-called tensions between the Duchesses.

Now, it seems that Meghan Markle's close friend has been accused of slamming recent photos of Kate Middleton. Keep scrolling to find out more...

There's been a lot of speculation when it comes to Meghan Markle and Kate Middleton's friendship.

Ever since Meghan wed into the royal family in 2018, all eyes have been on the sisters' in law.

And it didn't take long for rumors of a behind-the-scenes feud to start swirling.

Some of which began before Meghan and Harry had even tied the knot.

At the time, William and Kate had made it clear, publically, that they were happy for Meghan and Harry.

But of course, behind closed doors, the media painted a very different picture.

One of the first things people picked up on was Kate's absence from Meghan's bridal shower, back in March 2018.

At the time, Kate, who was pregnant with Prince Louis, skipped out on the celebratory weekend that took place at Soho Farmhouse. Of course, her absence didn't go unnoticed in the British press.

Amidst the media firestorm, at the time, Vanity Fair's royal correspondent Katie Nichol, spoke to InStyle about the pair:

While the fact that the Duchesses are very different people doesn't exactly make them enemies...

It certainly added fuel to the fire when it came to the headlines.

But the real bombshell was dropped in late 2018.

Amid the shocking report in the Sunday Times, revealing that William and Harry are going to split professionally in the future and have separate offices, many were quick to suggest that Meghan was the driving force behind it.

And just a month later...

Meghan and Harry announced that they were moving to Frogmore Cottage and would no longer be William and Kate's neighbors. A decision that allegedly came following tension between the 2 couples. In fact, at the time, Richard Palmer, the Daily Express's royal correspondent, wrote on Twitter that the reason for the move was "Harry and Meghan spreading their wings. No big fallout but Kate and Meghan not close."

"Kate was left in tears following a bridesmaids dress fitting for Princess Charlotte," a source revealed to The Daily Telegraph. “Kate had only just given birth to Prince Louis and was feeling quite emotional," although no other details were revealed apart from that. The incident happened around the time Meghan was reported to have also “upset" the Queen by asking to wear an emerald tiara instead of the one offered to her, The Telegraph reports.

At one point, it was said that Prince Charles had to step in.

A mutual friend of William and Harry's told Vanity Fair that in December 2017: “Harry felt William wasn’t rolling out the red carpet for Meghan and told him so." "They had a bit of a fallout, which was only resolved when Charles stepped in and asked William to make an effort. That’s when the Cambridges invited the Sussexes to spend Christmas with them."

There's seems to be no end to the reports of friction between the pair.

Some went as far as to say that the so-called "sisterhood" of the royal family was at breaking-point.

A royal feud or meaningless gossip?

Well, we'll never know for sure but there's no doubt that there's an overwhelming number of people who suspect that there has been tension between the pair.

And once again it seems that flame has been reignited.

But this time, for a more unlikely reason.

This week, fans of Kate and Meghan have been in the midst of a social media war.

The snap was posted for Holocaust memorial day on Monday. Part of the caption read: "Earlier this month, The Duchess of Cambridge met two Holocaust survivors, Steven Frank and Yvonne Bernstein, as she took photographs for a project by @holocaustmemorialdaytrust, Jewish News and @royalphotographicsociety to mark 75 years since the end of the Holocaust." "The Duchess’s photographs will be included in an exhibition of 75 images of survivors and their family members, which will open later this year."

While fans praised Kate for the snaps...

It seems that Meghan Markle's close friend, Jessica Mulroney, doesn't agree - according to Kate Middleton superfans, that is.

The forty-year-old Canadian fashion stylist appeared to launch a dig at Kate.

She took to her Instagram story, writing: "Pretty pictures are pretty pictures. Strive to use your platform for good and spread stories of incredible people striving to make this world a better place."

Of course, this could have been a generic comment and may not have been aimed at Kate...

But Kate's fans rushed to accuse Jessica of criticizing the Duchess, with some fans going as far as to brand her a "bully." "This was Jessica Mulroney's IG post today after the Duchess of Cambridge's Holocaust photos were released. Jessica you should be ashamed. You constantly whine about being bullied, yet it turns out you are the bully," wrote one superfan.

In fact, things got so bad that Jessica's husband, Ben Mulroney, has been forced to intervene.

The forty-three-year-old insisted that Jessica's Instagram story post was about the efforts to raise money for Canadian families bereaved by Flight 752, and not about the Duchess of Cambridge.

Although some fans remain unconvinced.

Either-way, while it may not have had anything to do with Meghan per se, there's no doubt that this helped unearth the Kate and Meghan drama that had supposedly been put to bed. Meghan and Harry recently got accused of photoshopping their Christmas card. Keep scrolling to see why...