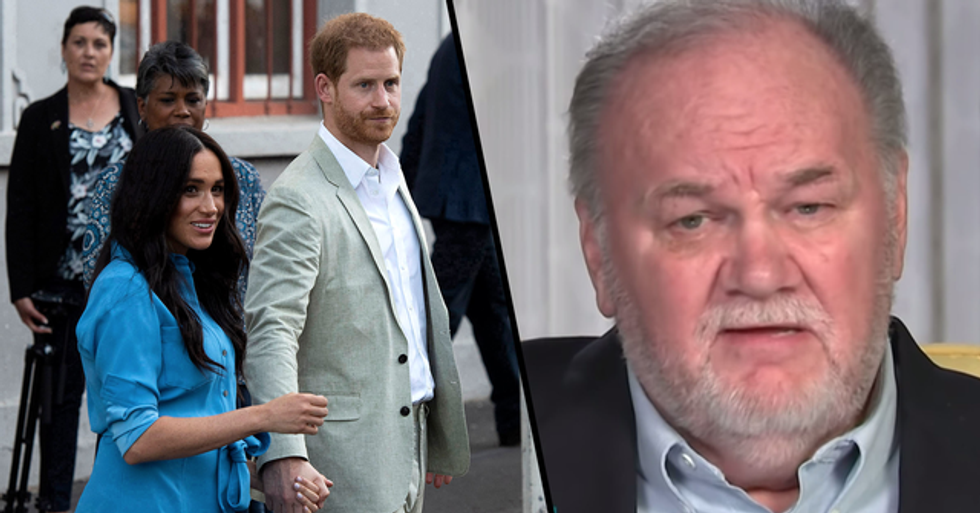 Prince Harry and his wife, Meghan Markle, have been thrown into the center of a complete media frenzy since their departure from the British monarchy, and many have been wondering what their families must be thinking of their controversial decision.

Well, a member of the family has now spoken out... And he certainly isn't royal.

Meghan's dad, Thomas Markle, who has his own controversial history with the media, has spoken out about his experiences with the royal family in a new documentary, and he had the most brutal words for his daughter.

Keep scrolling for the full story, and to hear what he had to say...

The Queen released a statement that claimed she was "supportive" of the couple...

“My family and I are entirely supportive of Harry and Meghan’s desire to create a new life as a young family. Although we would have preferred them to remain full-time working Members of the Royal Family, we respect and understand their wish to live a more independent life as a family while remaining a valued part of my family."

But some reports suggest otherwise.

Some sources close to the family have been claiming that senior royals were left “hurt" by the shock announcement that was made "without warning."

And it isn't just Harry's family who have been affected.

This whole situation has obviously taken some toll on Meghan's family who, before her transition into the royal family, were normal, every-day people.

Meghan's mom, Doria Ragland, has been by her side for the full journey...

The proud mom was seen as Meghan's highly-publicized wedding and was reportedly by her daughter's side for the birth of Archie.

But as for Meghan's dad?

Well, there has been quite the controversy regarding her dad, Thomas Markle.

We all remember his publicity stunt just before the royal wedding...

Remember? When he collaborated with paparazzi by posing for photos of him getting fitted for a suit just before his daughter's big day?

Well, ever since that, Meghan has cut all ties.

And Thomas has appeared in a handful of interviews to discuss his dismay over his (quite rightful, might I add...) banishment from Meghan's life.

But now, he has spoken out once more.

Thomas Markle: My Story aired on Alaska TV on 22 January, and viewers saw as Mr. Markle discussed his absence from the May 2018 royal wedding, the way in which he has been portrayed in the media, and how he learned the news of his daughter’s pregnancy over the radio.

He also spoke about his daughter's departure from the royal family...

Where he went on to brutally tear into his daughter for her actions against "one of the oldest and greatest establishments in the world."

He slammed the whole situation as "disappointing."

And claimed that Meghan is throwing away "every girl's dream." "It's disappointing because... She actually got every girl's dream - every young girl wanted to be a princess and she got that. And now, she's tossing that away... For money."

"3 million dollars and a twenty-six bedroom home clearly isn't enough for them."

Thomas is quite obviously incredibly bitter about their financial situation, and even commented that Meghan and Harry are "cheapening" and "destroying" the royal family, and are even "turning it into a Walmart with a crown on it."

"It's kind of embarrassing for me."

He states that Meghan had an obligation and that she should have stuck to it. "When they got married, they took on an obligation. And that obligation is to be part of the royals and to represent the royals, and it would be foolish of them not to [do that]."

"I think they're both turning into lost souls."

You can watch a snippet of Thomas's interview here. Jealousy isn't an attractive look, Mr. Markle... Keep scrolling to see a comparison of headlines from the British press about Meghan and Kate. You will be shocked...