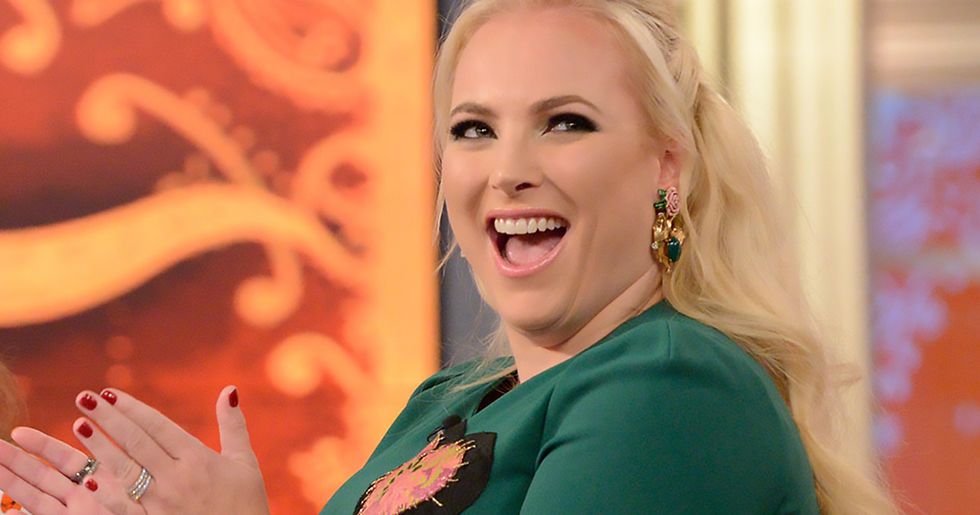 I would not necessarily consider Meghan McCain, daughter of John McCain and current host on The View, an internet superstar. She is active on Twitter, but she gets frequently owned for her tone-deaf tweets and odd takes. She riles a lot of people up! But recently, she tweeted something so purely funny that it instantly became a huge meme. It really took the internet by storm, and it is *Italian chef kiss* beautiful.

It started when McCain was insulted on Twitter by Denise McCallister, a conservative writer and someone who McCain was ostensibly friendly with since Denise was a guest at McCain's wedding. And the rest is history. The internet truly ran with McCain's hysterical comeback, "You were at my wedding Denise," and now it will live on in meme history forever. You simply could not make up such a punchy, perfect sentence. The world needed Meghan McCain to really feel it. And oh, she felt it.

Meghan McCain has recently made headlines for her controversial statements as a host of The View.

She cries a lot and says "I'm John McCain's daughter" a lot and generally seems to think like the world is out to get her.

But to be honest, The View seems to exist for drama like the stuff that Meghan McCain brings to the show.

Recently, McCain's supposed friend expressed some choice words about the show on Twitter.

Denise McCallister is a conservative writer, and according to this tweet, no fan of The View:

A "roundtable of delusional mental midgets," huh? Those are some strong words! And though McAllister didn't name names, the article she linked mentions Meghan McCain.

Conclusions were drawn, and McCain responded with this instantly iconic comeback:

I mean, it's just perfection. And she has a point! McCallister really seemed like she was going after McCain. And she was at McCain's wedding.

She claimed that she wasn't talking about McCain but instead about the rest of the hosts of The View. Likely story.

But none of it mattered.

Because "You were at my wedding Denise" was now in the lexicon. It became a meme the instant after McCain tweeted it.

I can’t wait to say “you were at my wedding Denise” to anyone and everyone that has a different opinion than me for the next month.
— Kate Chastain (@Kate Chastain)1553760286.0

If I invite you to my wedding and you attend, you are ethically obligated to agree with everything I say and do for the rest of time. Right?

It's the perfect comeback for someone who's been stabbed in the back.

"You were at my wedding Denise" is the new "Et tu, Brutus?" And honestly, I think it's more poetic.

The hits just keep on coming.

It's a new meme injected into an old meme! This is a thing of beauty. The internet has peaked.

I'm all for this cheer.

Guy with the megaphone: No justice! Crowd: No peace! Guy with megaphone: You were at my wedding! Crowd (louder this time): Denise!
— Colin Diersing (@Colin Diersing)1553630015.0

No justice! No peace! You were at my wedding! Denise! This is a cause I can get behind.

It's not clear whether McCain and McAllister are real-life friends.

But one thing remains clear. Denise was at her wedding. You don't insult someone who invited you to their wedding!

Everyone wanted in on the story of the meme.

It might be worth it to restructure your entire life just so you have a genuine excuse to say the sentence, "You were at my wedding Denise." It's that good a sentence.

It's the new "Bye Felicia!"

Some others are saying that it's the new, "Ma'am, this is a Wendy's." One thing for sure: It's a classic.

I can't wait for this movie.

Very excited for the “Rachel Getting Married” follow-up “Denise You Were at My Wedding”
— Will Kellogg (@Will Kellogg)1553608350.0

This is sure to be one tear-filled melodrama. Never underestimate the power of the bond between two women, one of whom was invited to the other's wedding.

Being invited to someone's wedding is a sacred, tacit agreement.

You can't betray someone after they paid for you to eat a piece of chicken, drink all the wine you want, and dance the Cuban Shuffle.

This is so true:

It's scary how many New Yorker cartoons this would make a perfect caption for. It applies to too many of them!

This Denise is available as an enemy-for-hire.

If anyone whose wedding I've attended needs me to publicly shit talk them, I'm available. https://t.co/uPcjPRs62M
— Denise Warner (@Denise Warner)1553623499.0

Maybe I can invite her to my wedding in exchange for a public altercation at a later date. Do you think she'd go for it?

"You were at my wedding Denise" is the most dramatic proclamation one can make.

Darth Vader lifts the Emperor high over his head and hurls his evil master into the bottomless shaft below. As The… https://t.co/WWBYHVnjZi
— suppelsa 😷 (@suppelsa 😷)1553644936.0

It works in the climactic scene of pretty much any movie. Star Wars, Gone With the Wind... really any movie.

Matthew McConaughey has big "You were at my wedding Denise" energy.

It's also known as BYWAMWDE. This is now the stance you must be in whenever you say, "You were at my wedding Denise."

This one is too good.

Yeah, Denise was at your wedding... You Red Wedding.

This betrayal is beyond.

How dare you come to my wedding, celebrate my marriage, and then offer me Pepsi, which everyone knows is a soda for heathens?

Obviously, it's "You were at my wedding Denise." Actually, it's "I don't know." Saved you a click.

This dog definitely has BYWAMWDE.

Only one of his eyes is visible, but it is doing its darndest to guilt you into feeling bad for him.

Dogs and this meme are an A+ combination.

"How dare you suggest that as a dog, I am not qualified to lead this meeting. You were at my wedding Denise!"

The wedding bond is strong with Meghan and Denise.

This is too funny. "You were at my wedding Denise. We got matching tattoos. Have you forgotten our bond?"

Well, this is a mild spoiler for the movie, Us.

But it's worth it. Don't go after your evil alter-ego! You were at her wedding!

In case you were wondering, yes, Meghan McCain became aware that she caused a meme.

And she seemed pretty on board with it, at least publicly. But this, my internet friends, is not the end of the story.

The real Denise, Denise McAllister, is actually kind of a terrible human being!

Fun fact about the “You were at my wedding Denise” meme... Denise is actually an incredibly big racist who lied ab… https://t.co/ChDF0rxyDU
— Tony Posnanski (@Tony Posnanski)1553686252.0

And just a few days ago, not even a week after she became the star of a meme, she tweeted something extremely homophobic and inappropriate.

But the damage was done. She may have been the subject of a harmless meme, but she herself is not harmless.

She was fired from her writing job, and then she tweeted this:

Not a good look, Denise. And not someone I would ever invite to my wedding, for the record. Share this with someone who would appreciate the craziness of this story.