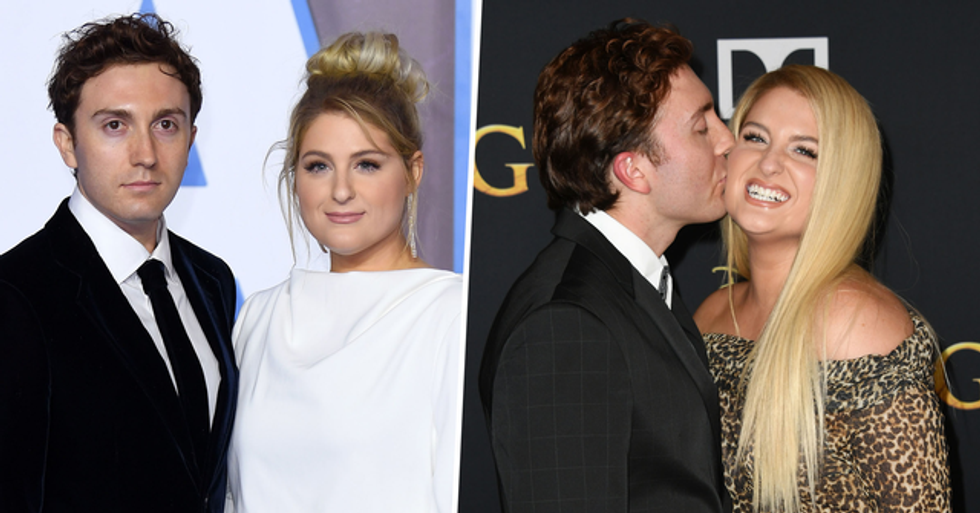 Meghan Trainor Pregnant With Her and Daryl Sabara's First Child

It seems quarantine has led to some celebs getting busy - and Meghan Trainor is the latest star to announce her pregnancy...

A huge number of celebs have become pregnant in the past year...

And we're here for it! For example...

The Latina Youtuber has shared multiple breathtaking snapshots of her baby bump since her announcement back in May and we just cannot get enough.

In a hilarious Instagram post, Chris Wood decided to make the announcement that he and his wife were expecting their first child, and of course, the news went down a treat, especially for fans of Supergirl.

The Florida Georiga Line singer revealed the big news on March 5th, while we were still recovering from Melissa and Chris' announcement. Look at the faces of their other 2 children as they heard the news. Adorable!

Maggie posted this gorgeous photo alongside a beautiful reminder: "In the midst of these uncertain times, we’ve been blessed with a joyful reminder of what’s most important. Our first little one will be joining us this summer. Sending love to you and your families, may you stay safe and healthy."

Prepare to get emotional! High School Musical star Ashley Tisdale shared a photograph of her and her husband looking down at her stomach to make their special announcement. I remember when she was twenty-one and lying on a hot pink floatie with a drink in her hand singing "Fabulous" and now she's expecting her first child? Pass me the tissues.

After suffering a devastating miscarriage back in 2017, the Welsh singer and her man, Joseph Powell, announced that they are now expecting their third child.

The power couple of the UFC let us all know they would be welcoming their daughter together this fall. “I am excited to announce that Baby Raegan Ann Nunes will be here mid-September!" Nina wrote, also adding that she would be the one carrying the baby. So cute!

The thirty-five-year-old television personality might be controversial on-screen but she has kept it real since her pregnancy announcement, revealing that she feels like "Shamu" while carrying her baby. She and Ben Domenech are due in a few weeks!

Back in March, the NASCAR driver and wife announced that they will be expecting their second child in a cute post showing their daughter Isla saying: "I'm going to be a sister!"

The couple posted this adorable picture to Instagram, Tenley cradling her bump while Taylor held the pregnancy scans in his hands. Simply adorable!

The musician and his wife are expecting their first daughter and judging by their Instagram posts, their 2 boys are very excited to be getting a little sister.

The country duo will be welcoming their child in October, congratulations!

The Top Chef star and her husband are expecting their second child together. Kelsey recently revealed that she's in her "final days" of her pregnancy.

They made the announcement by posting this beautiful black and white photograph, the only color prominent is the pink balloon, showcasing the gender of their baby. We love it!

The fifty-seven-year-old Botched star and his wife are excited to be welcoming their first child together. In a post back in April he said this: "All I know is I better get my diaper changing skills polished up. There is nothing like the feeling of holding a newborn, especially when it’s my baby."

You may know Joe by his in-ring name, Roman Reigns. The WWE superstar and his wife are expecting their second set of twins! Wow!

Talking to People, the couple revealed that they are expecting their daughter in October, while also revealing that the process was a successful attempt at IVF.

All the way back in April, the LANCO singer revealed that he and his wife were expecting a child and the pair are very excited.

This Big Brother duo are expecting their second child after Jessica made the announcement on her podcast. We're so happy for them!

The Whiskey Myers guitarist recently posted a scan showing their little baby and captioned it: "Our boy’s gettin ready to rawk! We see ya big dawg!"

In an adorable Instagram post, Ashlee let all her fans know that she and her man are expecting baby number 3!

AKA Colby Lopez and Rebecca Quin. The power couple of the WWE announced their engagement and within a few months, announced Becky's pregnancy too!

Another Big Brother couple, another baby. Rachel and Brendon are welcoming their second child very soon!

The couple are expecting their third child together and will be becoming a "party of 5" once the baby is born.

Romee was open and honest about the couple's journey to where they are today, revealing that she had a condition called polycystic ovary syndrome which meant that she didn't get her period for 7 years. But after embarking on the process of "natural healing", the model managed to get pregnant!

In May, the couple confirmed to People, that they were in fact expecting their second daughter. They told the news outlet that Felicity, their other daughter likes coming up to Jinger's belly and saying "baby, baby!"

The reality TV star made the announcement that she and her finance Beau are expecting a baby girl any time soon via Instagram.

The country musician and his wife are preparing for a little baby boy in December 2020. The news comes after the couple revealed that the couple was struggling with infertility problems from Chuck's side but have since confirmed the pregnancy news.

After celebrating their 12 year anniversary, Remy and Papoose announced that they will be extending their family. "I love being with my family," he said. "I get to spend so much time with my amazing wife and my amazing daughter. I'm just making the best out of it, and we're moving forward."

Kathryn shared the news on her Instagram with the caption: "The Brolin's are a growin' !! Our little December babe is on the way..." And Josh being the joker that he is commented on the post saying: "Wow. That's amazing! Congratula... wait... WHAT?!?!"

The singer, who gained fame from her single "Jar Of Hearts" back in 2011, announced that she was expecting another child with her husband Paul early next year. Congrats!

The professional dancer on Dancing With The Stars made the announcement as every other celeb does, on Instagram. "Baby McAllister coming Jan 2021!!!!! We can’t even contain our excitement and joy right now." Witney wrote.

The announcement was long and emotional: "I can't believe I'm finally sharing this news with you guys! @brendanfallis and I are beyond thrilled to announce that we’re pregnant! I have imagined this day for over 3 years now and while the journey to get here has been rocky and not at all what I had imagined, we are extra grateful to the process that led us here and we can't wait to share it all with you! If you are reading this and find yourself in one of those challenging spots that I know so well, I hope you can find some solace in the fact that there is no one journey, no one way to get to where you want to be. You will find your rainbow and we are so blessed to have found ours! We can't wait to meet our little angel baby this scorpio szn."

After saying "I do" in 2019, the couple is now expecting their first child! Unlike other posts, this one was subtle, captioned "muffins!"

The E! News host told her fans that she was going to be having a baby girl via a cute gender reveal party that showed her and her man bursting a balloon filled with pink confetti. Aw!

The couple will be welcoming their fifth child together, taking the number of children he has to 7 in total. Wow.

This iconic couple tied the knot last year before making their baby announcement just last month. The news has excited their fans as everyone's looking forward to seeing Baby Irwin in 2021.

The ex-gymnast and her husband are going to be having their third child together and Carly will be due in February 2021.

Gabby, 20 and Foehner, 24 got married in 2019 and will be having their first child together in 2021. The American Idol stars seem to be very excited about it all.

Rah Ali and her husband.

Rah made this exciting announcement after she had previously endured a tragic loss during pregnancy. The reality star lost her baby at 5 months and the news crushed us all. But now, there's nothing but happiness and she will be expecting her baby very soon!

Gucci Mane told his Instagram followers that his life was "great" because "his wife [is] pregnant." And that was enough for his fans to go wild.

The Vampire Diaries actress announced that she was having her second child with her husband, Joe King, on her podcast "Directionally Challenged." We're so happy for them!

The Duggar family is extending! The couple have recently announced that their third child is on the way.

Even though she didn't exclusively make the announcement on any socials, the actress was spotted leaving a children's clothing store wearing a peach-colored dress and a baby bump!

The Whiskey Myers singer and his wife are expecting a winter baby, with Hayley giving birth in February 2021.

Along with some ultrasound photos, the singer wrote this: "Even in times of darkness, like the ones we as a society find ourselves in today, God always finds a way to shine His light on the beautiful side of life, like the miracle of life itself. I’m so excited to announce that I’m having a baby! My life completely changed in an instant. Literally nothing else matters. I’m so excited and terrified all at the same time. I have no idea what I am doing but am so thankful that God chose me to be this baby’s mom."

The thirty-seven-year-old announced that she "couldn’t wait to share that my family is growing and we will soon welcome a new baby in our home." Congratulations to the happy couple!

Emma Roberts confirmed the news that she was expecting a child with her boyfriend via Instagram writing, "Me and my two favorite guys." Simply adorable!

In August 2020, the injured NBA player and his partner revealed that they will be expecting twins in 2021.

On an episode of Lala's podcase, she said this: "I'm, like, shaking right now because I can't believe that it's a real-life thing. I cry about everything but today it's very much happy tears. "For my 30th birthday I have the best gift given to me, my body also helped out too, I am pregnant," she then revealed before cheers were heard in the background. Aw!

The couple is expecting their first child together, which will be Usher's third child along with Naveid Ely and Usher V.

On September 3rd, the Australian model announced that she was having a baby with her boyfriend, James. She said that they were both "unbelievably grateful and happy!" That's all we could want for them.

The couple made an announcement with their other son, Dean, who was revealed to be wearing an "I'm gonna be a big brother" shirt in an Instagram video.

The Sister Wives star, who is the daughter of Christine and Kody Brown, is very excited to have made the announcement writing: "Tony & I are PREGNANT. We’ve been planning this since we were married almost four years ago. So happy that it’s finally happened. We are expecting the baby in March 2021. Happy beyond belief and I can’t wait to share another amazing experience with my husband."

But the latest pregnant celebrity really has the internet feeling excited

Huge congratulations to the pair.

She announced her news on the Today Show.

As Trainor says, "Hit it, Daryl," her husband follows with, "We're pregnant!"

"We're so excited we couldn't sleep."

We have to say, we're pretty excited, too! Want some more in-depth baby news? Scroll on...