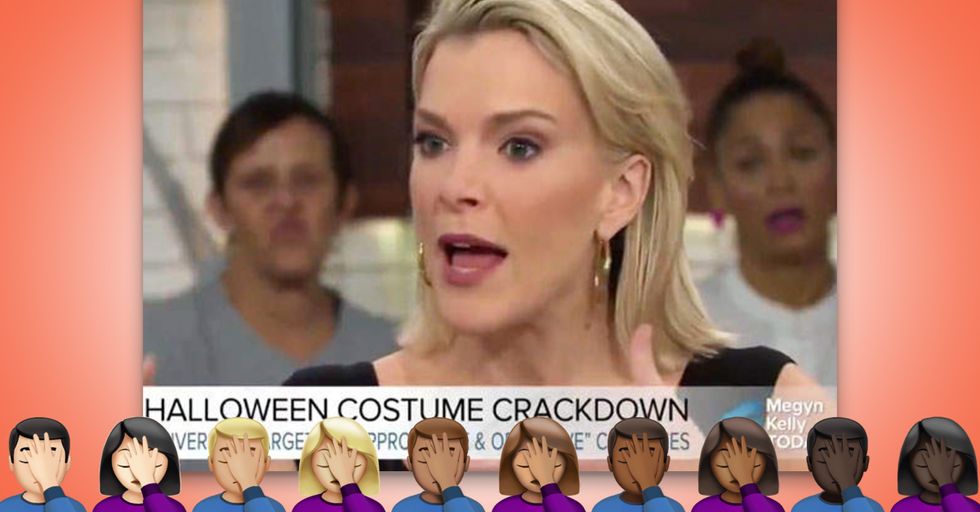 Megyn Kelly, the host of Megyn Kelly Today, is well known for being controversial. She's made plenty of incendiary comments, but this most recent one might take the cake.

In an effort to get into the Halloween spirit, during a segment on her show, Kelly brought up the topic of what's considered to be an appropriate costume. She began by bringing up a recently story out of the University of Kent, in England, and their student union's wish to ban costumes that are deemed "inappropriate."

You'd think by now we'd all have a pretty clear understanding of what's considered respectful or not in the realm of costumes, but apparently that is not the case. I'm sad to say that we are far from it. And apparently, so is Megyn Kelly.

During the segment, Kelly asked why blackface is considered to be racist. Which makes us, in turn, ask the question, really, Megyn?!

I have a lot of questions for Megyn. I'll start with, "why?" Why would you question whether or not someone would be offended by a costume that displays a non-person of color dressed up as a POC? Usually, people have the ability to answer that question in their own head.

She said it was because of her childhood.

In the conversation, Kelly stated, “You do get in trouble if you are a white person who puts on blackface for Halloween or a black person who puts on whiteface for Halloween. Back when I was a kid, that was OK just as long as you were dressing as a character." Oh, Megyn. Times have changed, but our issues with racism still stand. If the costume belittles, hurts or makes fun of someone at their expense, then don't wear it!

The show's guest hosts jumped in.

The Megyn Kelly Today episode featured Melissa Rivers, Jenna Bush Hager, and Jacob Soboroff. Cutting in over Megyn's ramblings of reasoning, the three attempted to give their words of wisdom. Melissa Rivers interjected, "Whatever happened to just manners and polite society...? Normal people kind of know where that line is."

Jenna said, "I think there are limits to how far you want to go, because you're making people feel bad..." Which is solid advice. Thanks, Jenna. Megyn's guests seemed to have more insight into the matter than she did, bringing some reason into the conversation.

I think it says a lot, coming from Megyn Kelly. The conversation took place around a table of white, arguably privileged people, most of whom don't ever experience the effects of racism — whether the racist actions are intentional or not, and while most of the commentators in the segment were well-intentioned with their arguments, I don't believe they understand the outrage they incited online and with the viewers at home.