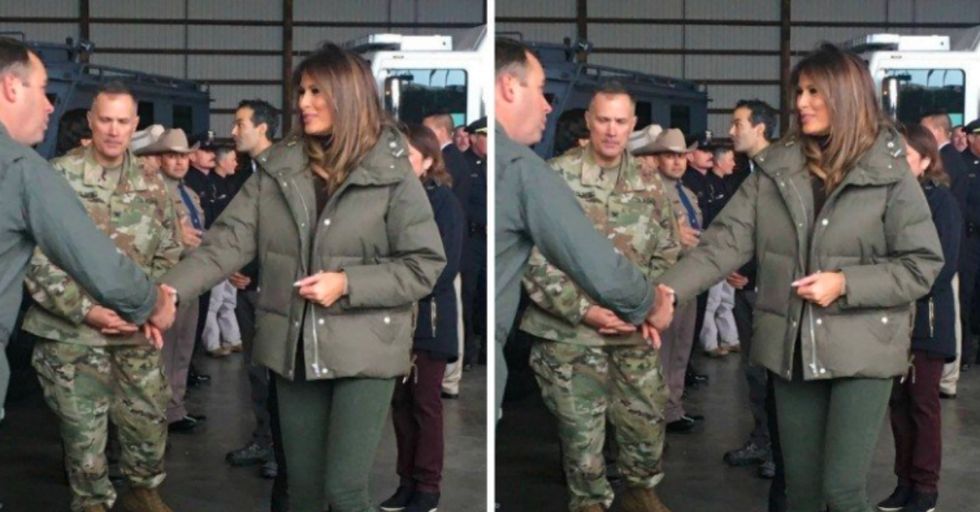 Fashion choices are different for everyone. Some women love wearing high heels and some women prefer to wear them only if absolutely necessary and carry a pair of emergency flats in their purse at all all times (or, let's be honest, just go barefoot by the end of the night). Melania Trump is definitely the former.

The First Lady loves her heels, and she sports designer pumps at pretty much every opportunity, even when it might not be the most reasonable choice of footwear.

On a second visit to Texas to visit Hurricane Harvey survivors, Melania Trump busted out this pair of heels.

Melania and Karen Pence visited Texas again this week to check up on the progress of hurricane relief efforts.  Last August Melania was under fire for wearing heels to visit hurricane victims in Texas, and this week, she’s at it again with a brand new set of heels.

Melania’s feet went viral after she showed up to disaster relief efforts in Texas wearing stilettos.

She was photographed getting onto Air Force One in a pair of black spiked pumps. Maybe it wasn’t the most sensible choice. In fact, it kind of makes us want to anonymously mail her some gel insoles and a personal foot bath. But to each their own.

The internet wasn’t too happy about the whole thing...

Reactions ranged from confused to angry. A lot of people thought wearing an expensive pair of heels to visit people who had lost everything seemed a little insensitive, not to mention inconvenient. Have you ever tried to walk in four inch heels just on regular, not flooded terrain? It’s basically an Olympic event.

This time they were tall, black boots.

Thank you #Texas! So enjoyed my visit with everyone today. Special thanks to 1st responders & @CoastalBendFB for al… https://t.co/Jym0PVxVWt
— Melania Trump (@Melania Trump)1512614230.0

At least they had a little more coverage. She wore the tall boots with a Rag and Bone puffer jacket and a pair of jeans.

The storm is over, though.

While her footwear choice is less inconvenient this time (the flood waters have receded), it still begs the question: is it appropriate to wear heels when visiting an area where many of the residents have lost absolutely everything? People had some STRONG opinions...

Most presidents and first ladies dress down to visit disaster areas, out of respect.

Michelle Obama and Laura Bush opted for a more casual look, they were photographed wearing sneakers and flats on their visits to disaster zones. A dressed down look isn't only for fashion purposes, it shows that the President and First Lady aren't just there for appearances, they are there to help. Heels just don't exactly convey the same message.

But the internet can be really harsh.

Even though she did wear heels onto Air Force One for the first visit, Melania did change into sneakers on the plane to Texas. She only got on the plane wearing heels where she changed into a more appropriate outfit.

After all the criticism she got for wearing heels to Texas the first time, it seems almost impossible that she wasn’t making some kind of statement with her footwear choice for this visit. This repeat offense of inappropriate footwear may be her way of saying “I wear what I want, no matter what the internet thinks." And you do have to kind of respect that, even if it does make your feet hurt vicariously.

She does wear heels well.

Melania wears high heels, emphasis on the "high." Melania is frequently at an elevation that may or may not require her to supply her own oxygen. But for all the times Melania has appeared in sky high pumps this year, not once has she taken a tumble.

But also, just an additional fashion aside, why is Melania always wearing coats inside?

Is it a fashion trend we just don’t know about yet? Indoor coats? Are we the ones who are behind?!

OK last one, but seriously why?

Can someone get this woman a hot pack for her pockets?

In any case, we’ll be keeping an eye on Melania’s next footwear choice.

Maybe she’ll surprise everyone and just bust out a pair of Crocs next. Who knows?!  (Ok, probably not but we can dream).