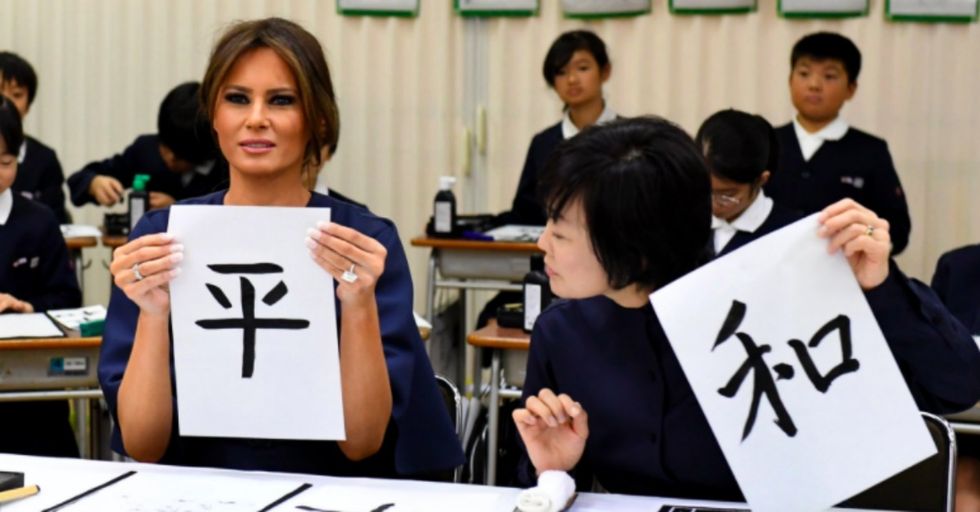 Pretty much the first rule of preventing yourself from becoming a meme is to never hold up a piece of paper that can be easily photoshopped to display something other than what was actually on it when you were holding it. Unfortunately, Melania Trump didn't seem to get that message. After a recent calligraphy lesson in Japan, the first lady showed off her handiwork. Of course, the Internet got ahold of the picture and went buck wild with jokes. And that is how Melania became a meme.

Melania attended a calligraphy class during the President and First Lady's trip to Japan.

Every moment is a photo opportunity for Melania Trump, and so obviously, pictures were taken of her taking a stab at this traditional Japanese art form.

Unfortunately, she went ahead and held up her calligraphy attempt at the perfect meme-making angle.

Reddit has an entire community dedicated to photoshop battles, so you better believe they had a field day with this photo of Melania Trump.

While Japan's first lady Akie Abe was mostly left alone, Melania's paper was turned into a veritable cornucopia of creative images, including tic-tac-toe:

To be fair, Melania was probably the "X" in this game.

The meme-ifiers weren't quite kind to the First Lady, giving her an "F" for her efforts while Japan's first lady got an "A+."

But look, it was her first attempt. The first lady of Japan has probably been at this for years. Melania's new to calligraphy, new to the First Lady position, and new to being a meme. Give her a break.

It's official. Melania's the coolest kid in the sixth-grade cafeteria. But that wasn't it! There were more...

Or maybe what Melania really wanted to share with us was her impassioned and slightly pretentious defense of the humor in the Adult Swim show, Rick and Morty.

Welcome to Meme Land, Melania. There's no way this is over yet.