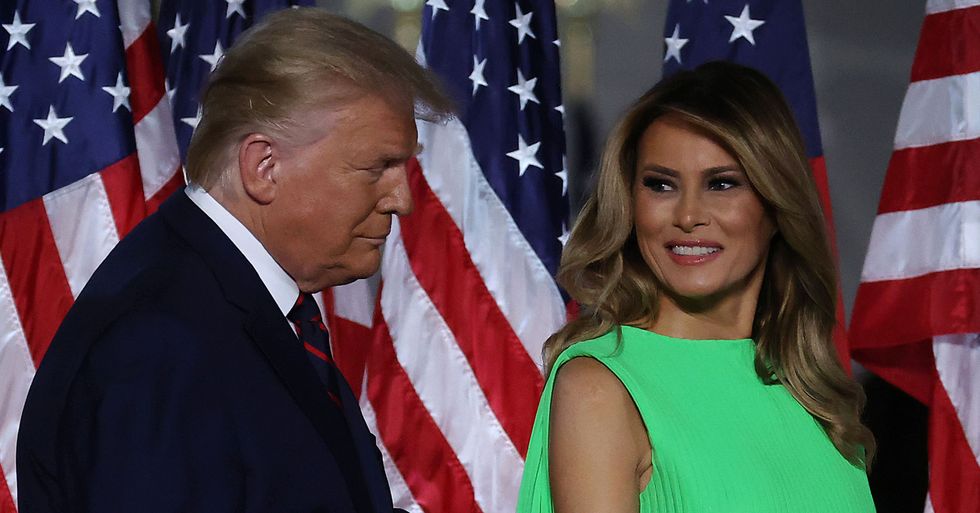 First Lady, Melania Trump, has been ruthlessly mocked thanks to a particularly ill-thought-through dress at the RNC.

When you think of a First Lady, Melania Trump isn't exactly what springs to mind.

Ever since her husband, Donald Trump, was elected as president in 2016, the world has been divided with their opinions on the former supermodel turned-First-Lady.

We don't think Melania had ever desired to be America's First Lady...

The then Melania Knauss, who was working in New York as a model after immigrating from Slovenia, first met Donald at a party during Fashion Week in 1998. The pair started dating and, in 2004 after his second divorce, they officially tied the knot.

But, regardless of her wishes...

Melania was thrown into the daunting role as First Lady when her over-ambitious, business-tycoon husband set his sights upon the White House.

Her transition into the role hasn't been a smooth one...

Melania has found herself being repeatedly criticized for a whole array of reasons throughout her husband's presidency.

Admittedly, Melania has risen to the role in an admirable manner...

But her lack of personal voice and charisma has continued to put her under the firing line of the public.

In October 2018, Melania embarked on her first major trip abroad without the President to Africa... Only 7 months after her husband reportedly referred to African nations as "s***hole countries." Melania never once addressed her husband's comments.

And, on the second anniversary of her husband's administration, she came under more fire for a tone-deaf Tweet made amid the ongoing Mexican border detention.

She wrote on the social media platform: "Our work in the East wing continues into 2019 with online safety, fighting opioid abuse & supporting the well-being of children everywhere! #BeBest" People ripped Melania for her message, in light of President Trump's "zero-tolerance" policy dictating that all adults found crossing the border illegally would face criminal detention while their children would be taken into government custody or sent to foster care.

But this week, she has yet again come under the scrutiny of the public...

And this time, it is all over a dress.

Melania attended the RNC this week.

But she made one big mistake - wearing a dress that essentially worked as a green screen.

And Twitter was not going to let this go.

If Melania knew how many people are going to take advantage of that green screen colored dress, she would have worn… https://t.co/uosgEzOQIm
— Jim Z (@Jim Z)1598581990.0

For more from Melania, scroll on for Chrissy Teigen's incredible Twitter rant about the first lady...