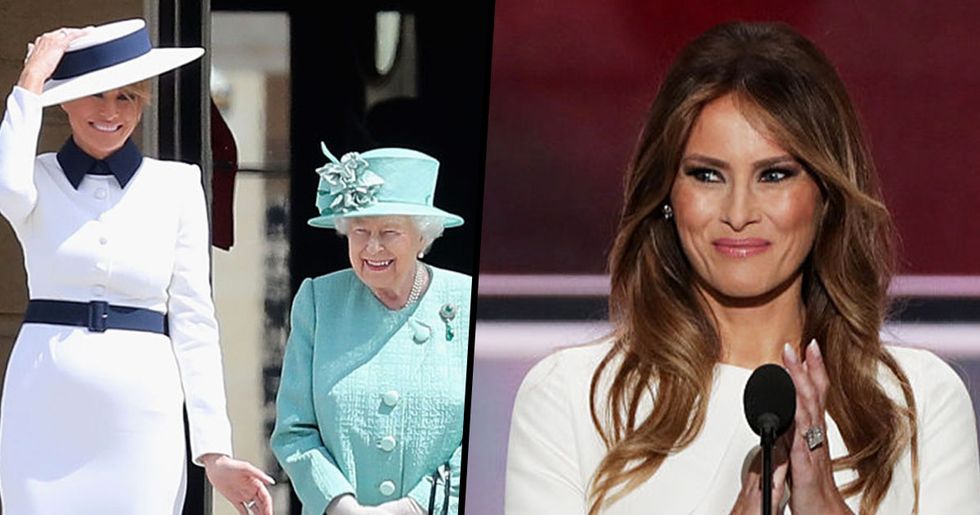 You might have heard a little whisper this week that President Donald Trump is visiting the United Kingdom.

That's right, he actually managed it. Despite protests, petitions and general grumblings from some British residents, President Trump has successfully landed on English soil for his first official state visit.

But you can't show up to the Queen of England's house empty-handed, right?

"Here's a job for you Melania... go get the Queen something nice."

It's customary for heads of state to exchange gifts during state visits.

Back in 2009, when Barack Obama visited the UK on his state visit (oh remember the days...), he reportedly gave the Queen an iPod.

What's wrong with that?

Well, apparently, the iPod that Obama gifted the queen was filled with pictures from his inauguration, as well as recordings of his speeches. Now some people thought that this was a bit of an awkward, self-absorbed gift... kind of like getting someone a pillow with your face on it. But I disagree. Surely the whole point of the President of America visiting the UK is to develop relations and allow for a deeper engagement between nations. If Obama felt that the Queen could do with educating herself a little on Barack and his politics, then more fool anyone who disagrees. There was one incy wincy little problem with this state visit gift, though...

The Queen of England already had an iPod.

She could've given it to Prince Charles... How was Barack Obama supposed to know that she already had one? I mean, really, what do you buy a woman who has everything?

The UK appears reluctant to host this year's state visit.

Amid the domestic turmoil of Brexit and the "will they, won't they" see-saw that's currently making the British Government a global laughing stock, it's not-so surprising that many UK residents feel like they could do without a visit from the controversial President.

Trump's relationship with the British public hasn't been particularly favorable in the past.

Do you remember when Trump visited the UK as part of a working trip? Shortly after becoming President in 2017, Theresa May (the UK's Prime Minister (for now)) invited Trump on a visit. The invitation was a tactical move by May in attempt to win Trump over.

As you can imagine, this charm offensive was not popular among many Brits.

Apparently, this honor is not one that is typically extended to world leaders. It was this favoritism on May's part that left many British people wondering why someone as unpopular and controversial as Trump was selected for said privilege.

The British people were so unhappy that Trump had been invited that Parliament had to debate a "Trump Ban".

With over 1.9 million signatures, the petition to ban President Donald Trump from British soil had to be debated in parliament - any petition with over 10,000 signatures has to be debated by the United Kingdom's House of Commons. With almost 2 million signatures on the anti-Trump petition, it's quite clear that Trump was not a popular man in Britain. Since then, the fight to ban Trump from the UK has tugged on.

The President's state visit has been pushed back more than two years.

Of course, Trump did visit the country as part of his working visit, but we all remember what happened that time. *cough* Inflatable trump *cough* in a diaper *cough*.

One person who won't be receiving a gift from Melania Trump is Sadiq Khan.

The Mayor of London, Sadiq Khan, wants nothing to do with Trump during his state visit. The two figures have come to disagreements on more than one occasion. Speaking about the Trump visit, Khan acknowledged the importance of British and American relations, but declared that “it’s wrong that the red carpet is rolled out."

Not one to stay silent, Trump has hit back at Sadiq Khan.

The President of the United States tweeted (oh, here we go...) that Sadiq Khan has done a terrible job as London Mayor and has been "foolishly nasty".

I don't think that the London Mayor will be making Trump's Christmas card list.

Trump also referred to Khan as a "stone cold loser" and, in a follow-up tweet, failed to spell the London Mayor's surname correctly - a slip that was arguably an intentional dig. Many British politicians have pulled Trump up on his racism.

Sadiq Khan isn't the only person in the House of Commons who doesn't dig Trump.

John Bercow, House of Commons Speaker, said of Trump: "Our opposition to racism and to sexism and our support for equality before the law and an independent judiciary are hugely important considerations in the House of Commons".

Meghan Markle won't be making the Christmas card list either.

The Duchess of Sussex, who is on maternity leave, has escaped Royal responsibilities to entertain the US President. Got away with that one, didn't you, Meghan!

Despite her absence, the Duchess of Sussex still managed to offend the President.

With comments made by Meghan on The Nightly Show in 2016 resurfacing ahead of the President's visit, trouble has inevitably ensued. Ms Markel, as she was called back in 2016, reportedly called Trump a misogynist while discussing his standpoint on women's rights. I mean, to be fair to Meghan...

After being alerted to Meghan's comments during an interview with The Sun Newspaper, Donald Trump said "I didn't know that. What can I say? I didn't know that she was nasty". The US President has gone on to deny that he ever called Markel nasty. Tweeting on Sunday, the President claimed that the implication that he called the now-Duchess "nasty" was "fake news". This is an awkward statement for Trump to have made given that The Sun interview was recorded and Trump's comments are available for anyone to listen to online. Nice try, Trump.

I don't think that Prince Harry will be getting gifts for the Trump family...

From the photos taken yesterday, it's quite clear that Prince Harry kept a fair distance from the President after the comments made towards his wife. This is a much different attitude compared to the friendlier relations displayed some years ago. In 2017, the Prince was seen sat next to Melania Trump at the Toronto Invictus Games, laughing and joking. Shouldn't have offended Meghan, eh, Trump?

Keeping your distance there, Harry?

Trump's visit to the UK feels a bit like when your mom forces you to invite that kid that no-ones likes to your birthday party.

"But mom, he's weird and he made Meghan cry and... and he picks his buggers and eats 'em".

Saying that, we all know that a good gift can save any unwelcome party guest from being totally hated.

And this important responsibility has landed in the hands of good ol' Melania Trump.

Being the wife to billionaire, Donald Trump, let alone First Lady to the entire United States, should have given Melania a bit of practice in the art of gift giving, right?

Well, I never thought I'd say this...

But I think that Melania Trump might have done a better job than Obama on this one.

All good gift-givers know that the best thing to do is ask what the gift-receiver might want.

Melania (or the people that do her bidding...) discovered that the Queen of England has quite a fondness for brooches.

Don't suppose any of you has an Elsa Peretti sterling silver and red silk poppy brooch?

Well, that's what the Trumps bought her, I mean... bought The Royal Highness.

Now for those Royal-fans out there...

If you would like one of these "Amapola" jewels, (Amapola meaning "Poppy" in Spanish), get yourself down to Tiffany & Co.

Or, you know, go on the Tiffany & Co website I guess?

The brooch retails for $760 on the Tiffany & Co. website.

The Queen's brooch was a little more special than the standard one, though.

Apparently, Mrs Trump gifted the Queen the brooch in a custom made White House wood jewelery box and placed it in a red leather box. La de da!

But what did the Queen give the Trumps in return for such a thoughtful gift?

Perhaps the Queen's gift is symbolic and will give the public an insight into what she makes of Trump...

Well, frankly, I can't work out whether it's a bad gift or not.

I mean, if somebody gifted me a copy of Winston Churchill's Second World War book series, I don't know if I'd be delighted...

Maybe the Queen is warning Trump about the perils of war?

But Churchill loved war, so I dunno. The edition of Churchill's Second World War is dated back to 1959 and the gift was accompanied by a three-piece Duofold pen set emblazoned with the EIIR cypher. Well, at least the President has got new pens to keep track of his golf pars.

But what did Melania get from the Queen? She did all the work, after all...

According to Hello, Melania was gifted "a specially commissioned silver box with a handcrafted enamel lid. Its royal blue decoration featured roses, thistles and shamrocks to represent the ceiling of Buckingham Palace's music room". So, a box, then? ... And by "specially commissioned," I wonder whether that means that they forgot about Melania and hastily took the box from the table in the music room... Don't worry, Queen Liz, we've all done it. Your secrets are safe with us. Who knows, maybe the British Royals aren't anti-Trump and they're still reeling from the iPod incident. One never forgets.