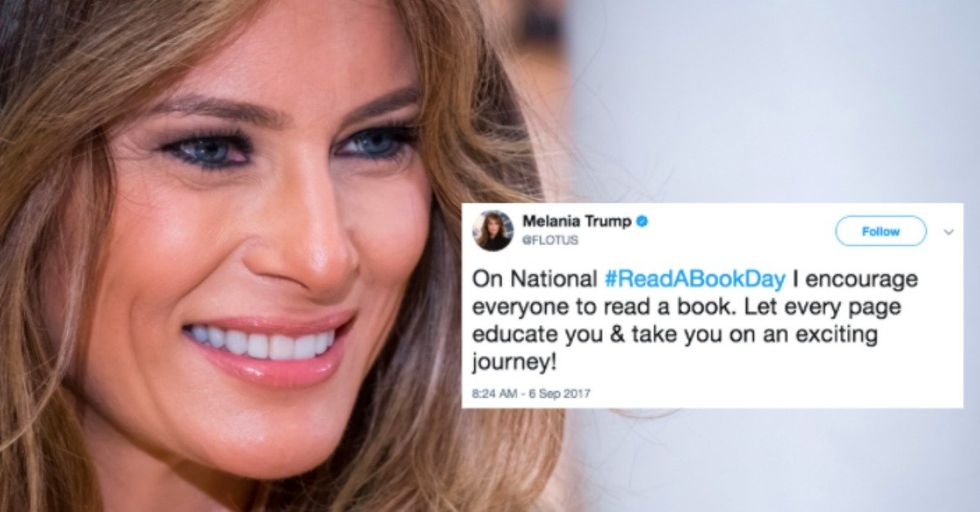 Melania Trump is just trying to do her best. Unfortunately for her, it's not good enough.

On the morning of September 6, the reluctant First Lady of the United States tweeted out an innocent enough message about National #ReadABookDay.

She encouraged everyone to pick up a book. But, because of her position and who her husband is, everyone grabbed their laptops instead and piled on mercilessly.

We feel slightly bad for Melania, but the jokes are choice.

Whether it's the shoes she wore to the hurricane or the man her dad resembles a little too closely (hint: it's The Donald), the public just can't seem to let her be and not make fun of her.

When she tweeted about National "Read a Book Day," it seemed for a moment like this was an innocent, unmockable move.

Alas, it was not. It proved very, very mockable.

First, the Internet laughed at the fact that Melania felt the need to explain reading to us.

She might as well have written, "Go to the library or a book store. Pick one of those things off the shelves. Open to the first page — those are the floppy things in the middle. Sound out the words..."

Second, they came with pitchforks, a.k.a. not-so-innocent questions.

What this tweet is really saying is, "Just tell me the last book you read. I'm curious, that's all. Why is it so hard to tell me? Is it because you've never read a book. Is it because you don't ever read? Is it? Is it?"

She didn't come back with any brilliant tomes, so people were happy to help her out. As you'll see, the suggestions weren't always "helpful."

Others got straight to the point.

Nevermind encouraging everyone else to read. We all know of a guy the First Lady happens to be really close to who could use a history lesson...

Then came the suggestions.

Ooh yeah, but only read a book on climate change during the day. If you read it at night, it will scare you so badly you'll have nightmares.

This GIF isn't so much in response to climate change as it is the torrent of criticism that seemed to come at her from all angles.

Hope you brought your slicker, Melania.

How about that classic?

We know it's a TV show, Melania. We know it's happening in real life all around us everywhere, Melania. That doesn't mean the book isn't worth a read.

In case you happen to be on a dystopian kick...

...for whatever reason. Not sure why you would be, but just in case. Then things got...academic.

This is a good one.

Isn't it amazing that Melania didn't even ask for book recommendations, and yet here are all these lovely people stepping up to the plate? Oh, these are mean spirited jabs? Ah, makes more sense.

You would think the First Lady would be up on that, but...maybe not.

If you'll remember, there was that little incident where part of Melania's speech was maybe possibly plagiarized from one of Michelle Obama's. Let's hear it for a callback! What other responses did people have?

Is that the best shade that could ever be thrown?

Michelle would be proud of whoever was the mastermind behind this one.

Pack up that hatchback and go, baby! We all support this, but the masses still weren't done!

This was a resounding favorite as well.

It's just advice, so take or don't take it, but it seemed to be POPULAR advice.

On a slightly more serious note...

This is probably just a good read for everyone in general. Since Nazis are back and everything.

Lots of Americans don't know Trotsky, but this could be good for all of them.

Could be I Know Why the Caged Bird Sings. Could be The Cat in the Hat. Literally just show us that the man is literate. Anyway, Happy National Read a Book Day.

In honor, hunker down with a nice book.

Melania may not practice what she preaches, but you certainly can!