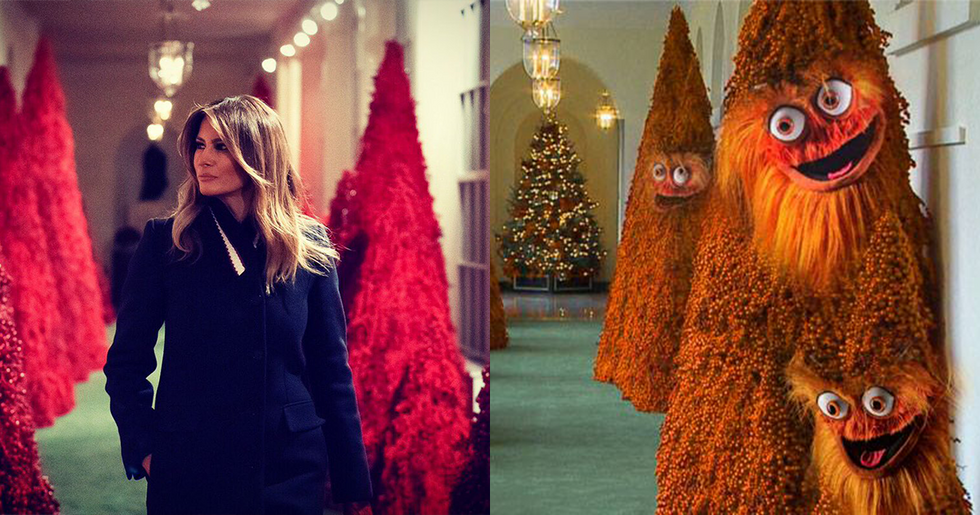 Since the Thanksgiving holiday is over, you know what that means– it's practically Christmas. We hope you adequately stuffed your bellies with turkey and your trunks with Black Friday and Cyber Monday deals, but now it's back to reality for the next two weeks, until the next holiday food-induced coma.

This morning the White House published a cheerful Christmas decoration video, and everyone from suburban moms to hipster millennials began raising their eyebrows. It's basically Christmas Cup Controversy 2.0 (so a non-controversy that's overblown and everyone will forget about in a month), and what better venue than the White House, which can't seem to get anything right. Luckily this time it's not Donald Trump putting good girls and boys in Christmas cages, but rather his wife Melania who's sparking the controversy.

But to her credit, no one has ever accused her of not caring.

Check out the video below to see if you can catch what people are so upset about.

Did you catch it? Maybe it was hard to see, there was quite a lot going on in that video. (I'm joking.)

Maybe you guessed that it was Melania looking longingly at this ornament of the West Coast.

If you guessed that, you'd be wrong– although I do feel bad for Melania. She's clearly dreaming about going to the most liberal part of the US because Trump would never look for her there.

Maybe it was this shot of Melania admiring this cutout of Obama's hometown of Chicago.

Again, not quite what everyone seems to be freaking out about, but still weird. Melania, please stay away, Chicago is a sacred place.

Okay, what about those weird red trees?

Yes! The weird trees. You know, those weird red trees Melania walked through like she was walking through Willy Wonka's factory. The First Lady had this photograph on her Instagram page before later deleting it.

So why are people upset?

Well, they are a little bit creepy. This hallway of red trees and green carpet just kinda looks like something out of The Shining. And the internet has taken notice, in all the glorious, weird ways that the Internet does.

I wasn't kidding about that movie reference.

What a comparison! How do you feel about the red Christmas trees?

Here's another prime example of what I'm talking about.

The trees also kinda look like something out of a Handmaid's Tale Christmas Special.

Blessed Be the Fruit to all you Handmaid's out there. I know this year has been tough.

I gotta say, this one is pretty spot on too.

What about something a little more kid-friendly?

For those out of the loop like I was...

It's pretty spot on, don't you think?

Getting our nerdiness on...

Does this imply that Melania is somehow Natalie Portman in disguise? I don't think she'd love the comparison...

Maybe we can make a game out of this whole affair.

Okay, no. I meant a fun game. That people will actually want to play. Sorry Ben...

The memes keep rolling in...

Trump has evolved from regular Cheeto to Flamin' Hot Cheeto. What will it be next year? Hit me up in the comments with your best guesses.

How about Melania at the car wash?

And now onto what is probably my favorite remix of the White House Christmas decorations. Starting with a big lovable orange idiot named Gritty.

Remember this guy? For the uninitiated, this is Gritty, the new Philadelphia Flyers mascot unveiled earlier this year. And I know what you're thinking: "I'm afraid." Which is fair, but Philly has taken to this mascot in a big way, and it's somehow morphed into a weird symbol for liberals in the city. Don't ask me why.

Last month when Trump visited Philly, he was met with Gritty protesters.

There were hundreds of Philly locals protesting Trump and the extremist hate group Proud Boys a few weeks ago, and Gritty was right in the middle of it.

More signs from the protest.

Good for Gritty, so politically active and involved in his community.

So what the heck does this have to do with Christmas?

some amazing handmade gritty swag at the counter-rally today. "All I know how to do is crochet and protest Nazis." https://t.co/t9wWjhb2WX
— Parker Higgins (@Parker Higgins)1542471870.0

I think you already know... And if you don't, you need to spend more time on the internet.

I present to you, the Gritty White House Christmas Tree Forest.

This is beautiful. This is the reason I love the internet. Of course this is a thing. "He sees you when you're sleeping, he knows when you're awake. He knows if you've been bad or good so LOOK OUT HE'S RIGHT BEHIND YOU".